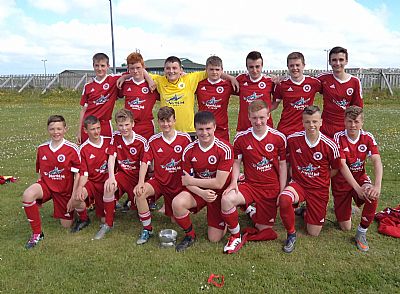 An excellent weekend for the County squads was completed when the Orkney Under 15’s completed a season double over Caithness with a 3-1 victory at Picky today. Goalscorers were Andrew Mulraine with a penalty in the first half and Ryan Harcus and Ryan Mooney with two goals in the second half. This was Orkney’s first win in five years on home turf against Caithness and in so doing they regained the OYDG Quaich to add to the Loisburgh United Memorial Cup they won against Caithness in Thurso last week. Well done to the squad and coaches.