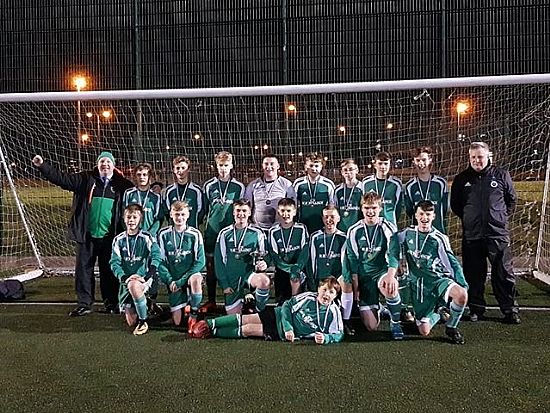 The final of the Maurice Walls Cup took place last Friday 5th October. Stromness , 2018 League winners , a team who had remained unbeaten all season, took on Thorfinn and what a game it turned out to be.

A perfect night for football saw Stromness press from the start and an array of first half free kicks which were on target found that Flett in the Thorfinn goal was going to be hard to score against as he got his body behind every attempt at a goal from the Stromness side. The first half was a tense affair with both sides showing a great desire for winning the cup. It was Stromness who arguably had the better of the chances, with the Thorfinn keeper keeping the score level at 0-0.  Eventually however pressure prevailed with Stromness captain  Owen Young, maintaining composure in the box to ensure Stromness were ahead at half time with the score at 1-0.

The second half proved to be one of the most exciting halves of the season. Thorfinn were strong in maintaining their shape, frustrating the Stromness side, before hitting them with a swift counter attack, Craig Harrison running clear to level the score. Some great individual play by Owen Young put Stromness back in front 2-1 but Craig Harrison had a taste for goal now and levelled for a second time with a header from a corner. The score was now 2-2 with both sides fighting desperately hard to take the lead.

Neither team held back in their efforts at going for the win before full time and the two teams traded blow for blow, but the defences held. It was Craig Harrison again who made the difference, gaining possession just outside the Stromness box and putting a shot into the top right corner. With the score at 3-2 in Thorfinn’s favour, both teams appeared determined to take the cup.  As Stromness pushed hard for the equaliser they were caught on the break right at the end, Craig running through to slot in his and Thorfinn’s 4th of the night.  An outstanding 4 goals from Craig Harrison of Thorfinn. The whistle blew with a final result of 4-2 to Thorfinn.  A superb show of football with both sides showing Orkney youth football at its best with all players a credit to their clubs. This was the last game of the season for the OYDG outdoor games and what a game to close the season with.

Marty Flett of Alfred Flett Ltd presented the Cup to a jubilant Thorfinn team. The Thorfinn side was captained by Jamie Flett who in his speech thanked the Thorfinn coaches Bob Adamson and Graham Harrison as well as Roy Foubister in his absence, as well as Jim Leask for officiating, Alfred Flett Ltd for sponsoring and Stromness for a great final.

OYDG would also like to thank Alfred Flett Ltd for sponsoring the medals for this knockout tournament for 11 years.  The OYDG are delighted to announce that from 2019 Alfred Flett Ltd. will be sponsoring their own league, The Alfred Flett U11s League. Since 2007 this tournament has been sponsored by the families of the late Brian Kemp and Eric Kemp. The OYDG would also like to thank the Kemp Family for their support for youth football over the last 11 years.

In appalling weather conditions on Monday 1st October, East United took on Stromness in what  was an extra ordinary game with  players from both sides fighting desperately hard for a place in  the final. In an enthralling game that could have seen either team win, with a 3-3 draw at  half time and a 4-4 draw at full  time. A penalty shoot out ensued with still both teams drawn until the  last penalty shot when the Stromness goalie pulled an  extra ordinary save out of the bag. Hard luck to East United as the game could have gone either way and well done to both sides for their exemplary conduct on and off the pitch.  Thorfinn beat Hotspurs 3 -1 in the other semi final, so this years 2018 Maurice Walls  final  sees Thorfinn take on Stromness. The final is expected to take place later this week.