Last Saturday 20th March saw the final evening of the Hourstons Indoor 4’s competition. This indoor futsal tournament is divided into two competitions, one for S1/2 players and one for S3/4 players, representing their clubs. The competition has also evolved into a league competition held over 5 Saturday nights throughout the winter months.

Despite various Covid affected weeks throughout this period, all fixtures managed to be played and both competitions went into the final week with still some questions over the final outcomes.

The S1/2 league proved to be a little more competitive, with teams from Hotspurs, Stromness, East United and Dounby all battling at the top of the league. By the final week the title was in Hotspurs E’s hands, needing one win from their two games to lift the title, with Dounby A close behind in case of any slip. Despite Dounby doing their part, Hotspurs E needn’t have been concerned, with two good victories themselves to win. The difference had proved to be a closely fought match between the two sides, Hotspurs stretching into a 3-0 lead early on, only for Dounby to bounce back to 3-2 and doing everything but scoring the equaliser. With Stromness, East United and another Dounby team all tying for third place, these teams will now look forward to a good, competitive outdoor season. 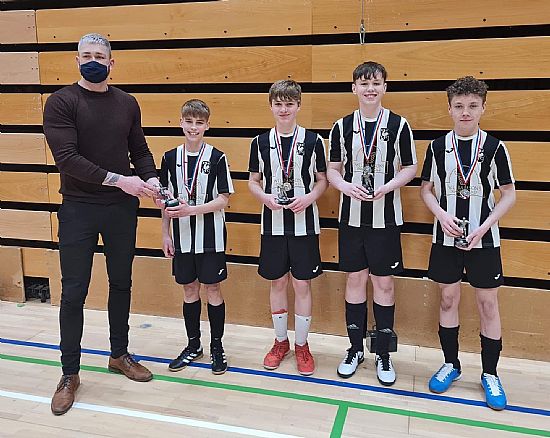 As always, our thanks go to many people including our long-term sponsors W Hourston Jeweller for their continued support, Pickaquoy Centre for their great facilities and to all coaches, parents, players and officials for their support and sportsmanship throughout the season.

In the S1/2 league we are now halfway through after the second round of fixtures on 30 November, with each team having played each other twice. Again, it is tight with 2 teams tied at the top. Stromness ‘A’ and East United ‘A’ played out a very exciting 1-1 draw, with the East side trying to close the gap after Stromness’s strong start. However, Rovers B provided the result of the evening with a 1-1 draw, frustrating Stromness ‘A’ and keeping it all even at the top. Rovers A and Dounby also have had strong starts to the competition and will be sure to be in the hunt when matches resume on 1st February.

The secondary footballers kicked-off their indoor league with the Hourston’s 4’s competition on Saturday 9th November.

Representing their clubs rather than schools, it proved to be a very competitive start to a tournament that will see all 9 teams play each other twice. Rovers A finished the first set of fixtures on top but certainly didn’t have it all their own way, with East United taking the points from them in a competitive 2-1 win. Hotspurs also gained a hard-fought point from Rovers A but, showing the close nature of so many matches, they then dropped points against Stromness B, who were then also defeated by Wanderers. Indeed, every team gained some points with the majority of games having only a single goal difference in the score line. However, there are only 2 teams unbeaten after the first night, with Stromness A gaining 3 wins from 3 and East United only dropping points in a draw with Dounby. These two teams have games in hand on the leaders and will look to make up the difference in the next fixtures on 30th November.