On a perfect night for football Thorfinn A & Rovers met in the final of the Maurice Walls Cup at Pickaquoy on Friday night with Thorfinn looking for victory to secure a league and cup double.

The teams were evenly matched in the opening exchanges with chances for both sides. Thorfinn came closest to scoring hitting the post after a slip up by the Rovers goalkeeper.  They were also unlucky when a free kick just outside the box was deflected over the bar by a Rovers defender. Rovers best effort was a long range free kick which went narrowly wide.

With nearly half an hour on the clock Thorfinn made the breakthrough. Following a corner a well flighted cross was powerfully headed home by Darren Maclean. Thorfinn ended the first half the stronger team with a couple of efforts on goal just before the whistle.

The second half followed a similar pattern with both teams matching each other and a number of chances being created. Thorfinn came closest to scoring hitting the woodwork for the second time in the match. The decisive second goal came 7 minutes from time when Ryan Williams shot home. A third goal from Lee Wilson followed shortly afterwards to make the scoreline look more comfortable than it actually was.

Following the game OYDG Chairman Jim Cormack thanked the referee and the Pickaquoy groundsman for the excellent playing surface. He congratulated Thorfinn A on completing the league and cup double, commenting that it had been a hard fought victory with the 3-0 scoreline flattering Thorfinn. He also thanked Alfred Flett Ltd for sponsoring the competition for a further year.  Due to other commitments the company were unable to be represented and the Cup and winners medals were presented to the winning Thorfinn team by Jimmy Leask, a member of the OAFA committee. 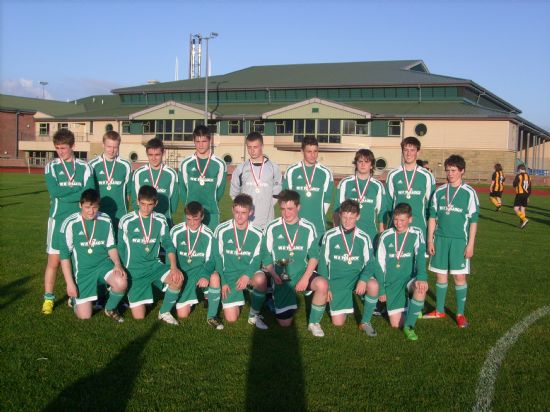 Thorfinn A 6 Thorfinn B 1

Thorfinn B 0 Thorfinn A 7

The final competition of the 2009/10 youth indoor football season - the W Hourston Jewellers Indoor 4’s for S3/S4 was played at Picky on Friday 19th March. Unfortunately due to adverse weather conditions Sanday were unable to travel to participate so a reduced number of 10 teams lined up to play in two groups with the top two teams progressing to the semi-finals.

The semi-finals were very tight affairs with little to choose between any of the teams. Rovers A narrowly overcame Midwest A by a single goal in a game in which Midwest had a number of good chances to equalise. The second semi-final was even tighter with Thorfinn A and B drawing 1-1 after extra time with Thorfinn B unlucky in hitting the post for what could have been a winner. Thorfinn A won the penalty shoot out by 3 goals to 2.

Rovers A may have been slight favourites in the final but it was Thorfinn A who took a 2 goal lead. Rovers could have drawn level but they were very unlucky hitting the bar twice. They were awarded a penalty which they converted but Thorfinn A held out for a narrow but deserved 2-1victory to retain the trophy.

At the end of the night Jim Cormack OYDG Chairman thanked all those who had assisted in running another successful competition in particular Rovers and Thorfinn. He concluded by thanking W Hourston Jewellers for their continued sponsorship of the tournament and handed over to Tom Macphail representing the sponsors who presented Thorfinn A with their winners medals and runners-up medals to Rovers A.