UNDER 12’s COMPETITION WITH LERWICK RANGERS AND TSB 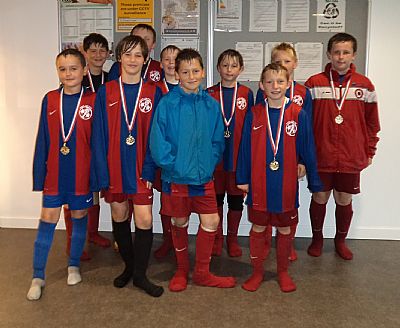 East United B, winners of the B League

On 7/8 September OYDG welcomed visiting Shetland sides Lerwick Rangers and TSB for the annual Under 12’s 7-a-side competition with 6 teams playing in the A League and 8 teams in a B League. Despite the appalling weather conditions on the Sunday when torrential rain fell for the 5 hours of competition credit is due to all the teams for producing two very exciting leagues played over the two days.

In the A League the two leading sides were Lerwick Rangers and East United. The key game turned out to be played on Saturday when Rangers narrowly edged out East by 2-1 in a closely fought match where East had late chances to take something from the match. Rangers duly won their remaining two matches on Sunday despite being given a fright by Dounby in a close match, thereby pipping East by a single point.

The B League was even tighter and was again contested by teams from Lerwick Rangers and East United. Both their B teams won all their matches and faced each other in the final match to be played on the Sunday. In a closely fought match neither side was able to score and so it was goal difference that decided the winner with East United B taking the honours this time round. At the end of the competition OYDG Chairman Stephen Crawford thanked the Shetland teams for coming down and presented winners medals to the victorious Lerwick Rangers and East United teams.

OYDG would also like to thank all the referees that helped out over the weekend and a big thank you is also due to the hardy band of parents and supporters who endured the difficult weather conditions on Sunday to provide support and encouragement to all the teams. 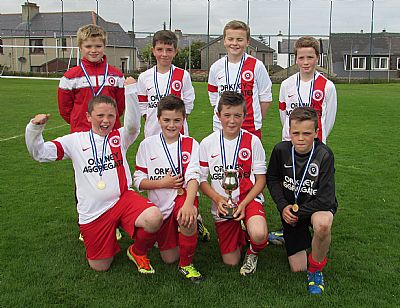 Kirkwall with the Andromeda Cup

Orkney’s Under 12 squad travelled up to Shetland on the weekend of 30/31 August for the final inter county football clashes of the year. On the Sunday prior to the County matches the squad were invited to participate in the Andromeda Cup, an Under 12 Shetland club competition. The Orkney squad was split into three teams for the competition – East, West and Kirkwall. At the end of the competition it was the “Kirkwall” team who ran out the overall winners keeping up a fine tradition of Orkney victories in the previous two years – 2010 and 2012 that they have participated.

The other two Orkney sides also played very well with the “West” side reaching the semi-finals after winning 2 games and drawing 2 games during the group stages. The semi final against Whitedale was a very close fought battle ending with a no score draw.  The game went to penalties and the West unfortunately lost 2-1.

The Orkney “East” team were drawn in a very competitive group with what turned out to be the strongest of the Shetland teams.  After a fine 5 – 1 win over Ness United in their opening game the team then battled out a fine goalless draw with Whitedale.  In their next game the team met a very strong Lerwick Rangers side and, despite playing some excellent football, a couple of defensive slips saw the local side prevail by 2 – 0.  The team signed off in fine style with a 3 – 0 win over Delting, but with other results not going their way, the Orkney side finished the group in third place, just missing out on a semi-final place. 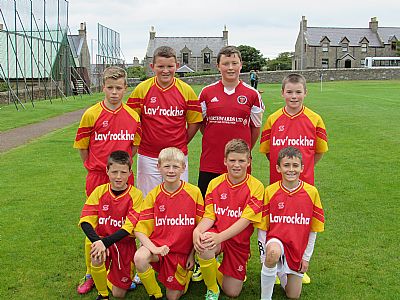 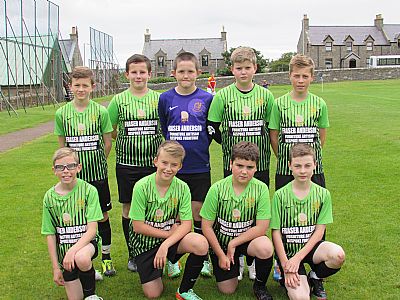 UNDER 13's IN SHETLAND 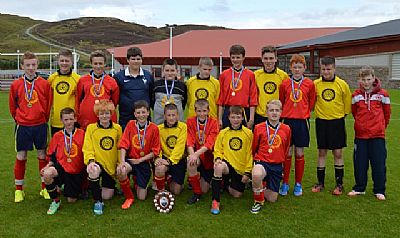 There was success for the Orkney Under 13’s when they won the 7-a-side competition against Shetland clubs played the day before the inter county match on Sunday 24th August. Split into an East and West team they topped their respective groups and met each other in the final of the competition. The East side won on penalties. 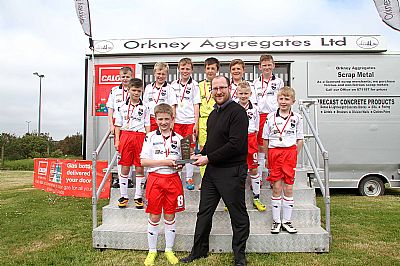 The ever popular Northern Counties competition sponsored for the fifth year by Orkney Aggregates was played at Picky on Saturday 7th June. Ross County’s Under 12’s squad returned to defend the trophy they won on their first entry into the 7-a-side tournament last year. This turned out to be one of the tightest competitions in years with both the final and one of the semi-finals being decided by penalty kicks. In the end it was Ross County who emerged victorious to take the trophy back to Dingwall for the second year in a row as they edged out their Premiership rivals Caley Thistle on spot kicks.

The best of the Orkney teams were Orkney Red who had it not been for a poor start in their opening match when they lost to Caithness would have probably made a semi-final slot. They picked up after their slow start and earned remained unbeaten in their rest of the group matches including a very creditable draw against Inverness Caley Thistle in a match where they came close to winning with chances near the end of the match.

At the end of the competition Alex Rodwell representing Orkney Aggregates presented Ross County with the Northern Counties trophy. The full results were: 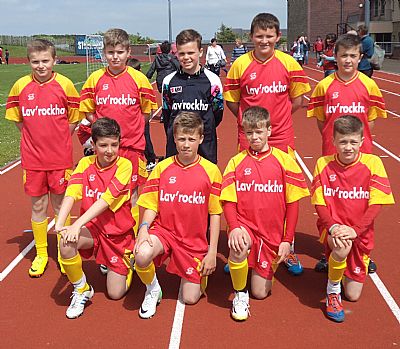 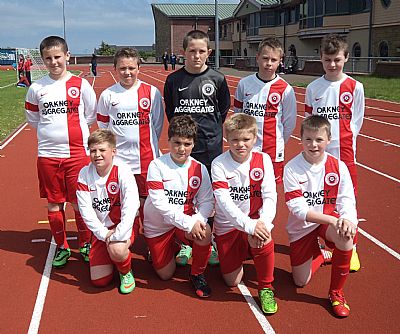 There was success for Orkney on Saturday 31st May when three Orkney teams and two Shetland teams played in a round robin 7-a-side tournament. The competition was won by the Orkney Green team who were unbeaten over the four games and just pipped Orkney Wine who were also unbeaten. 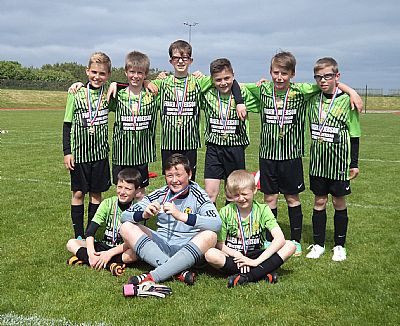 Winners, Orkney Green with 3 wins and a draw 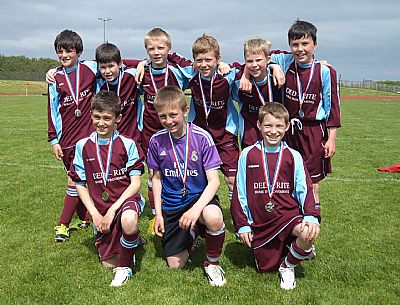 Runners Up Orkney Wine with 2 wins and 2 draws 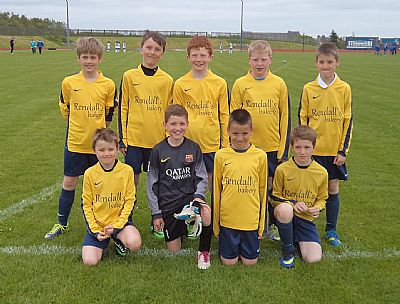 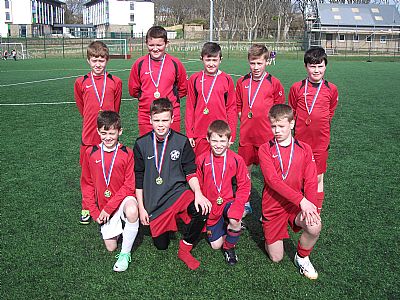 East Utd A, winners of the A League 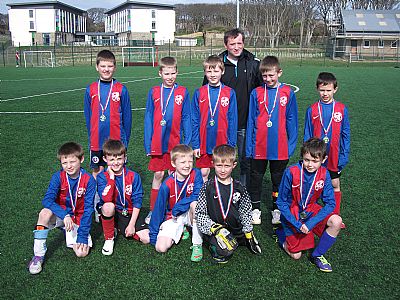 East Utd B, winners of the B League

This year’s annual Under 12’s Whitedale football competition took place on Saturday in perfect weather for football at the Kirkwall Grammar School 3G pitch.  This competition is run to coincide with the visit of Whitedale Football Club who come down from Shetland at Easter time each year.

The B League consisted of two teams from Thorfinn, and one each from Dounby, East United and Whitedale.  With some teams short of a few players due to holidays, it was an opportunity for some of the younger players to get a game.  After several closely fought games, and a drawn match between the top two sides, it was East Utd B who narrowly beat Thorfinn B in the B League.

The A League was no less competitive with East Utd A battling for the top spot with Thorfinn A and Whitedale A.  In the end,  East Utd maintained a perfect record of four wins from four matches to take the league ahead of Thorfinn A in second place and Whitedale A in third.  Dounby A and Stromness came in 4th and 5th respectively.

At the end of the competition, Stephen Crawford (OYDG Chairman), congratulated all of the players on the standard of their football and thanked the Whitedale players and coaches for coming to Orkney for this competition.  The full results were as follows:-