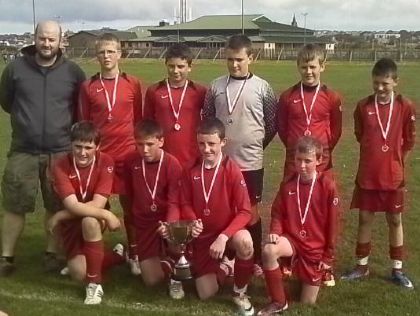 The S1 & Under outdoor season concluded on Saturday 3rd September with the final two cup competitions being completed at Picky. A dull and damp morning turned into a fine sunny day for football as the competitions moved into the latter stages. The format for the competition saw 11 teams competing in three groups with the group winners and best placed second team progressing to the Cup semi-finals and the remaining teams playing for the Plate. Unfortunately Stromness were unable to raise a team but making a welcome addition to the club sides was a team representing Stronsay.

In the semi-finals favourites East Utd A had a comfortable 6-0 victory over Rovers. Dounby A also looked comfortable leading Thorfinn A but two late goals for Thorfinn made for an exciting end to the match. In the final East Utd A showed their superiority at this level winning the match comfortably 6-0 against Dounby A. This completed a league and cup double for Utd for the second year in a row.

The Plate was a much closer competition. Dounby B ensured another final appearance for Dounby beating East Utd C 3-0 although the match was closer than the scoreline suggests. Thorfinn B had earlier been beaten by Thorfinn C in the group matches but they ensured there was no repeat by beating their clubmates 3-1 in the other semi-final.

The final of the Plate proved to be the tightest game of the day. Few chances were created in the first half which ended goalless. Dounby B took the lead shortly after half-time and nearly added a second shortly afterwards. However midway through the second half Thorfinn B equalised and despite having the bulk of pressure for the remainder of the game could not find a winner. The game moved into extra-time with the best chance of the first half falling to Dounby, but it was Thorfinn B who scored the winner 30 seconds before the end of extra-time. This was hard luck on the Dounby team who had played so well in the match. This victory also secured Thorfinn another league and cup double following on from them winning the Division 2 league earlier this summer.

At the conclusion of the competitions Jim Cormack OYDG Chairman congratulated both teams on a league and cup double and thanked the referees, groundstaff, and R Clouston Ltd for their continued sponsorship. He made special mention of East United’s achievements in the S1 & Under competitions over the last 2 years; the excellent performance by the Dounby teams in reaching both finals; and he welcomed Stronsay’s participation in the competition.

The day ended with Jimmy Leask presenting the trophies and medals to the winning teams. 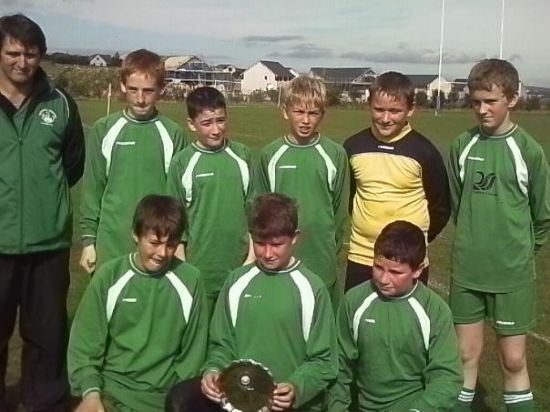 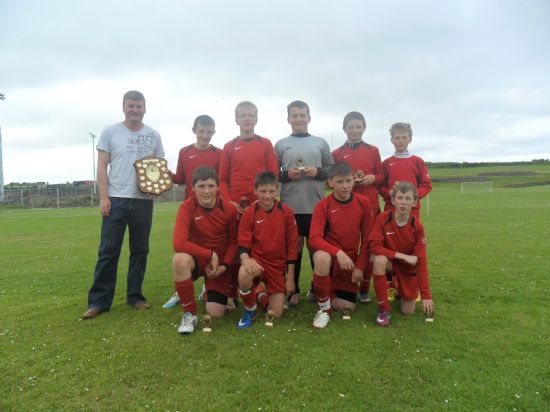 The final week’s fixtures in the S1 & Under leagues were played at Picky on Sunday (19th June).

For the second year in a row East United A have won Division 1 and the E G Kemp Shield. With two of their opponents - Stromness and Rovers unable to field teams this week it meant that East were assured of victory without kicking a ball. They did go on to claim a 2-0 victory in their final match against Thorfinn A  to ensure they maintained their perfect 100% record. This was another fine victory for East United and yet another trophy for a talented set of players.

Division 2 was a much more competitive league which turned into a two horse race between Thorfinn B and Dounby B. With both teams winning their games it was Thorfinn who edged the league by 3 points. With both the games between the two top teams ending in draws there was nothing much to choose between the teams. The west team will regret having dropped valuable points in a goalless draw with East Utd C earlier in the season which gave the advantage to Thorfinn.

At the end of the competition Jim Cormack OYDG Chairman congratulated the winning teams and praised all the teams for the high standard of football. He also thanked the clubs for running the competitions and the Kemp family for their continued sponsorship of the leagues. Paul Kemp represented the family and presented the EG Kemp Shield and winners medals to East United A and the BW Kemp Cup and medals to Thorfinn B. 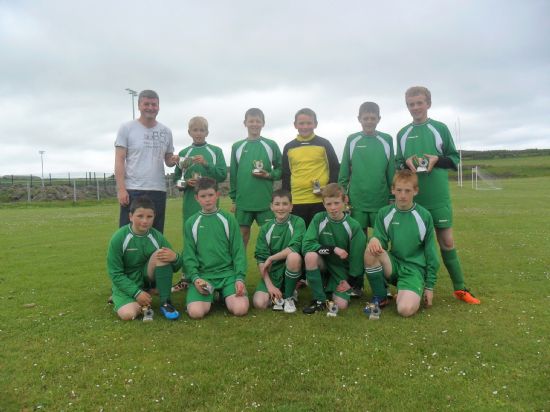 The fourth week of fixtures were completed in overcast conditions in Stromness on Saturday. In Division 1 East United A continued their 100% record beating Dounby A 2-0 and now only need a single point from their final three games to clinch the league for the second year in a row. Although Dounby managed to hold United to a goalless draw at half time they finally succumbed to relentless East pressure in the second half.

Division 2 is still a two horse race with the top two Dounby B and Thorfinn B winning both their matches. Thorfinn remain favourites but they will need to win all three of their remaining games to be certain of securing the league.

The final week of matches take place on Sunday 19th June at Picky.

The annual W Hourston Jewellers Indoor 4’s club competition for S2 & Under players was played at Picky on Friday 12th March. Eleven teams lined up to play in two groups with the top two teams progressing to the semi-finals.

The semi-finals resulted in victories for Stromness and East Utd A. Although the margin of Stromness’s 3-2 win over Dounby was narrow, the victory was well deserved. In the second semi-final the skill and speed of East Utd A overcame a Thorfinn B team who adopted what was considered by many spectators to be an overly physical approach.


With the two best footballing teams reaching the final a close match was anticipated. Stromness were looking to go one better having lost in the final of the S3/S4 competition the previous week. However it was East Utd A who took the lead in the match and although an equaliser provided hope for Stromness, it was the east team who scored a further two goals to deservedly win the competition.


At the end of the game Jim Cormack OYDG Chairman thanked all those who had assisted in running another successful competition and congratulated the winners and runners-up. He concluded by thanking W Hourston Jewellers for their continued sponsorship of the tournament and handed over to Tom Macphail representing the sponsors who presented East Utd A with the Cup and Stromness with the runners-up medals.