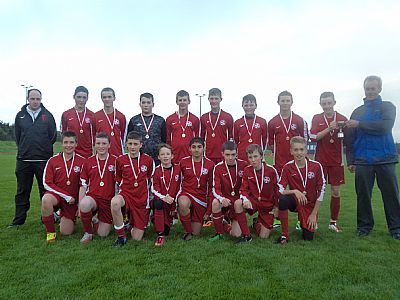 East United completed a league and cup double when they overcame a spirited Rovers side in a competitive and exciting match played on a heavy pitch at Picky on Monday night.

It was Rovers who made the better start to the match and they were unlucky not to take the lead in the opening five minutes with a number of efforts on goal including a fierce effort which came crashing back off the crossbar as they attacked following a corner. As United came back into the match and pressurised their opponents Rovers were forced to concede a number of free kicks on the edge of the penalty box but East failed to take advantage.

Craig Drever in the East goal was forced to make a fine save to prevent Rovers taking the lead as play swung from end to end. The decisive breakthrough came after 20 minutes when after a fine run by Robbie Scott he powered in a shot which the Rovers keeper got hands to but was unable to prevent from crossing the goal line. An exciting and closely fought first half ended with no further scoring despite a number of half chances for both teams.

Rovers were unlucky not to score an equaliser within a minute of the restart but despite an almighty scramble in the United box no Rovers forward was able to apply a finishing touch. Almost immediately Rovers where caught with a sucker punch when after a speedy counterattack Liam Delday ran through the middle unchallenged to slot home and double East’s lead.

United were now starting to control the match and the increasing pressure told on the Rovers defence ten minutes later when a shove in the box by a Rovers defender resulted in an East penalty. Joe Wilson converted the penalty in style to ensure that there was no way back for Rovers. Whilst both teams continued to attack and created a number of chances there was no further scoring.

In the end this was a deserved victory for United whose superior finishing proved too much for a Rovers team who contributed much to an entertaining match.

Following the match OYDG Chairman Stephen Crawford congratulated both teams on putting on such a competitive match and introduced sponsor Marty Flett who presented the Cup and winners medals to East United. OYDG would like to thank Marty for his continued sponsorship of the competition and Ian Scott for refereeing the match. 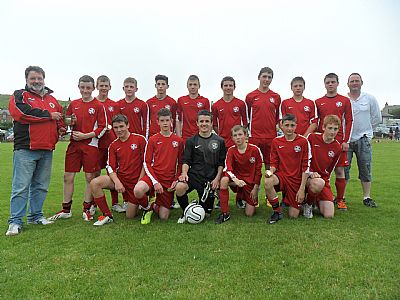 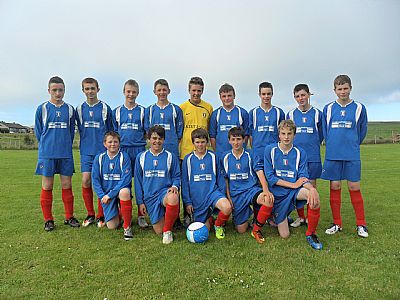 The West Under 15 squad 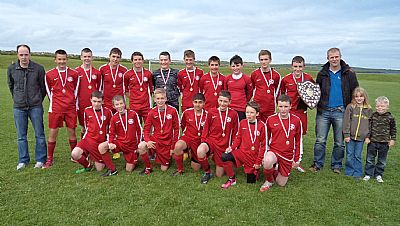 East Utd being presented with the Merriman Shield

There was little between the sides in the opening half of Monday’s match and it was Thorfinn who took the lead midway through the first half with a Jas Sitte goal. The lead was short lived as East equalised from the restart through Robbie Scott after a defensive slip up. Thorfinn came close to regaining the lead when a Sitte lob over the keeper came back off the crossbar, but the first half ended all square.

United upped their performance in the second half and took the lead 10 minutes into the half with a scrappy Liam Delday goal. As East piled on the pressure Joe Wilson raced through for a fine third goal and a Steven Low drive sealed the victory. Five minutes from time Fraser Dowell converted a Thorfinn penalty after a handball in the box to score a consolation goal and reduce United’s lead.

Following the match the presentation of the League Shield and medals to the winning players took place. Stephen Crawford congratulated East on winning the league and thanked Merrimans for their continued sponsorship of the competition. Representing the sponsors Brian Linklater presented the Merriman Shield to East United captain Joe Wilson. With the league in the bag East will be looking to complete a double when the Maurice Walls Cup is played for later this summer. 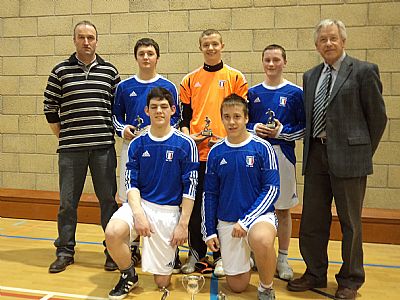 Dounby retained the W Hourston Indoor 4’s for S4 & Under clubs after a closely fought final against Thorfinn on Friday night (8th March).  For the second year in a row it took a penalty shoot out to separate the finalists and once again Dounby proved to be penalty kings. An exciting final between two well matched teams could have gone either way during normal time. Some fines saves by both keepers kept the scores down with Dounby scoring first before Thorfinn equalised. In extra time Thorfinn took the lead but almost immediately Dounby hit back. Thorfinn came closest to a winner when a long shot came back off the Dounby post but the final whistle blew with the scores level at 2-2.  Dounby held their nerves to record a 4-3 victory on penalty kicks.

At the end of the competition Stephen Crawford OYDG Chairman congratulated both the finalists and praised all the teams for a clean and competitive competition. He thanked the sponsors, coaches, parents and referees before handing over to Brian Clark who presented  the medals and trophies to the winners and runners up on behalf of sponsors W Hourston Jewellers. 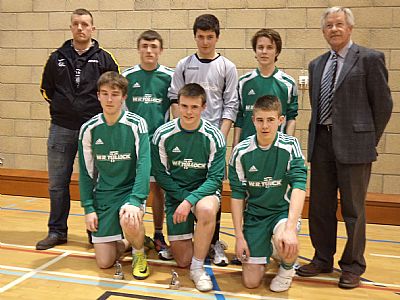 Runners Up Thorfinn A pictured with Bryan Clark representing the sponsors