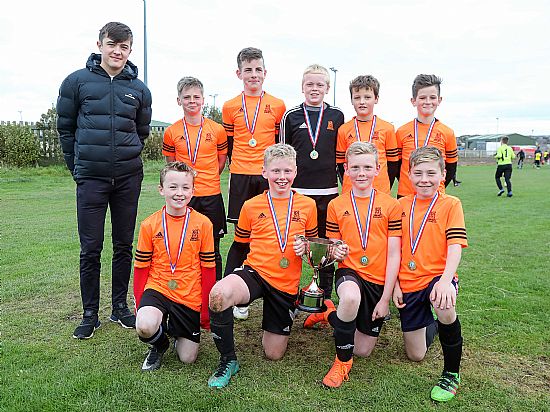 Rovers A, winners of the 2018 Clouston Cup were presented with the trophy by Jamie Clouston, representing the sponsors

The Clouston Cup is the final competition in the U12 outdoor calendar was played on Saturday 15 September. It was contested by twelve teams from Six clubs, Dounby, East United, Hotspurs, Rovers, Stromness and Wanderers. It was a day of fantastic football and a great competition. The group stages provided a high standard of play, with numerous younger players rising to the occasion and proudly representing their teams. Dounby A, dominated their group winning all five matches, joining them to going through to the cup later stages were Stromness A and East United B. In group 2, Rovers A and East United A finished level on points and head to head record, so competed in the first OYDG penalty playoff, where instead of a playoff match, the two teams go head to head on penalties to decide which team takes first place, this was won by Rovers A, to win the group, they were joined in the Cup by Hotspurs white. Going into the cup were Hotspurs Yellow, Wanderers, East United C, Stromness B, Dounby B and Rovers B. Plate Quarter finals saw Wanderers V East United C and Rovers B v Stromness B, Wanderers won against a young East side, while Rovers and Stromness went to penalties after it was dead locked after extra time, over 10 penalties were taken and despite some fantastic saves from a young Stromness goalkeeper, Rovers showed their experience and progressed. Plate Semi-finals, Hotspurs Yellow v Rovers B and Wanderers v Dounby B, in the first match Hotspurs Yellow worked hard and managed to get the better of Rovers B, the second was closer with both teams giving their all, Wanderers managed to come out on top. In the final it was Hotspurs Yellow and Wanderers, both of these teams worked their socks off, in this match, for a neutral it was great to watch, both teams were excellent on the counter attack, the two goalkeepers kept their teams in the game, after twelve minutes they could not be separated, it went to extra time and in the second half, Wanderers scored after a corner, this was a game that either side could have won. It finished 1-0 with all the players having played their hearts out.

Cup Quarter finals, East A v East B, an East derby in the first match was always going to be an exciting affair. There was a good sense of rivalry and importance for both sides to win. East A showed their class and managed to come out 3-0 winners. Stromness A v Hotspurs White, both teams missing players but playing well to get to this stage it was a tense match, with both sides displaying the high level of football that they have boasted throughout the season. Stromness dug in and came away with the win. Cup Semi Finals, Dounby A v East A, two undefeated sides met, and showed the supporters their style and ability throughout this match, East A, seemed to find a higher gear in this match and the goals followed, with East running out 3-0 winners. Stromness A v Rovers A was a close match, these have been two of the strongest teams, with some memorable matches earlier on in the year and this did not disappoint. Rovers A did manage to edge it 1-0, but they had to do it the hard way with Stromness pushing them right to the last second. In the final, it was a repeat of a group game that finished 0-0, Rovers A v East United A, both teams had shown their strength during the day, they played out a very close final, with both teams have chances to score. Both defences played remarkable to deny the others attack, it ended up being a first half, Rovers A goal that would decide the final. These two teams both deserved to be in the final, the calibre of football in this match, shows Orkney Youth football at its best, the final was a great show of teamwork and dedication from both sides. I am sure this is not the last time these players will meet in final. 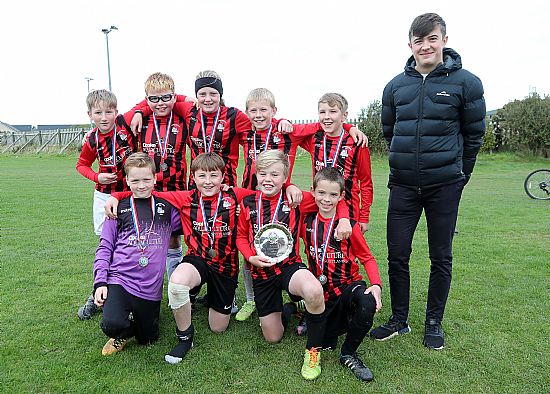 Wanderers, winners of the R Clouston Plate with Jamie Clouston representing the sponsors