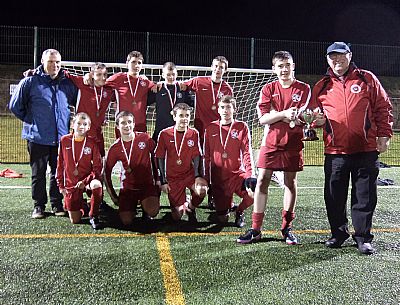 East United, S3/S4 League Winners being presented with the Jim Cormack Cup by Jim himself 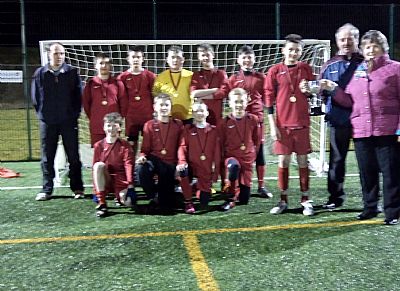 There was double success for East United as the first ever outdoor Winter Leagues concluded at the KGS All Weather Pitch on Friday night (1st March). United went into the last night leading both leagues and they negotiated their final set of fixtures without too much trouble to complete a historic double.

The new leagues have been a highly successful venture providing much needed competitive football for secondary aged players during the winter months. Addressing the players and supporters at the end of the competition OYDG Chairman Stephen Crawford commented on the good spirit the matches had been played in, thanked all those that had supported the league and confirmed that this would now be a permanent fixture in the youth footballing calendar.

Two new trophies for the league were kindly donated by N & D Chalmers (Stromness) and former OYDG Chairman Jim Cormack.  Both Jim and the Chalmers Family presented the new silverware to the winning East United sides at the end of the night. OYDG would like to thank both for their sponsorship of the competition.

The new 2012/13 Winter Leagues at S1/S2 level and S3/S4 level commence this Friday 23rd November. The leagues will be 7-a-side and run over four Fridays during the winter months: November 23rd; December 7th; January 25th; and February 22nd - from 6pm - 9pm on the Kirkwall and Stromness All-Weather-Pitches. Three teams will compete for the S1/S2 league and six teams will participate in the S3/S4 league.

Clubs are reminded that each team will have a maximum of 9 players on the night and that substitutions can take place on a rolling basis.

If ''home'' clubs could arrange referees, OYDG will arrange for staff to take scores, and record league positions.

Since it is winter, players, coaches, and spectators are reminded to come with adequate clothing. There will be some additional shelter in Stromness in the shed and the school.