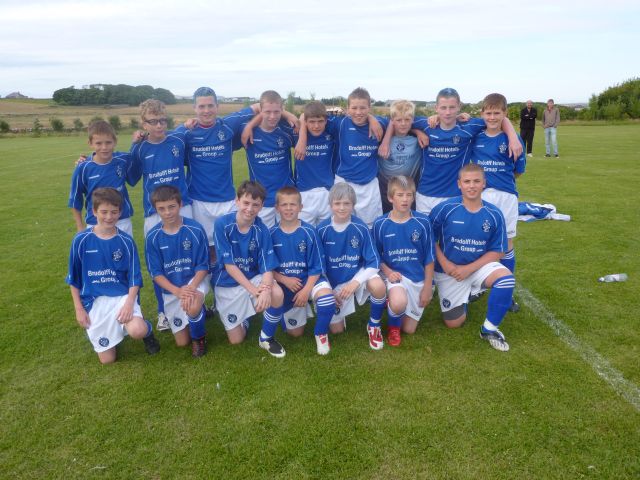 (Above) - Shetland - Winners of Under 14 Boys Festival Tournament 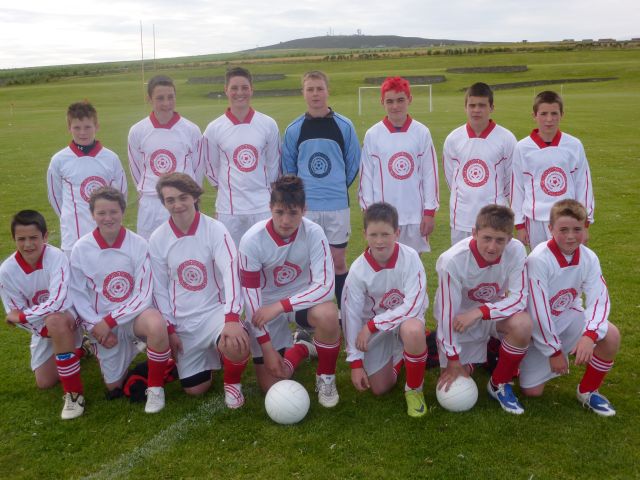 The Under 14 Boys competition was completed on the final day of matches at the 3rd Football Festival. The key match was that between Shetland and Caithness United with the winner being guaranteed to win the tournament.

Caithness started the first half brightly but it was Shetland who finished the half the stronger and had the best chance of the half with a header which flew past the post just before the break.

In a very competitive match with very few chances for either side the only and winning goal was scored by Ryan Thomson of Shetland midway through the second half. The final whistle brought joyous scenes for the Shetland team and their sizeable band of supporters.

This was a well deserved tournament win for a strong and well organised Shetland side who had a couple of lucky wins in the course of the competition but nevertheless finished with a 100% record having won all their 5 games. The win also repeated the victory of the Shetland Under 14 boys in the previous Festival in 2005.

Caithness's defeat provided an opportunity for Orkney A to clinch second place in the competition provided that they could overcome Mintlaw Academy in the final match of the Festival.

Despite Orkney taking an early lead, a Mintlaw equaliser midway through the first half saw the scores tied at half time. Orkney took full control in the second half scoring four goals without reply including a Lee Wilson hat-trick which saw him end up as the leading scorer in the tournament.

Lewis & Harris who had completed their fixtures on Saturday saw their skilful play rewarded when Micheil Smith was awarded the Player of the Tournament Trophy at the Awards Presentation held in Picky at the end of the Festival.

In a one-off challenge match for Boys Under 12 one of the most exciting games of the Festival saw Orkney narrowly losing 4-3 on penalties after a 3-3 draw with Caithness United.

Despite being the better side in the first half, defensive mix-ups cost Orkney dearly and they ended the half all-square at 2-2. Orkney were unfortunate in striking the woodwork on a number of ocassions in the first half. Caithness had the better of exchanges in the second and despite Orkney pulling ahead, Caithness equalised at 3-3 to take the game into penalties.

In the Under 16 Challenge Match East had a fairly easy 5-0 victory over West and in a Ladies friendly match Mintlaw Academy beat the Orkney Womens team by 3 goals to 1. 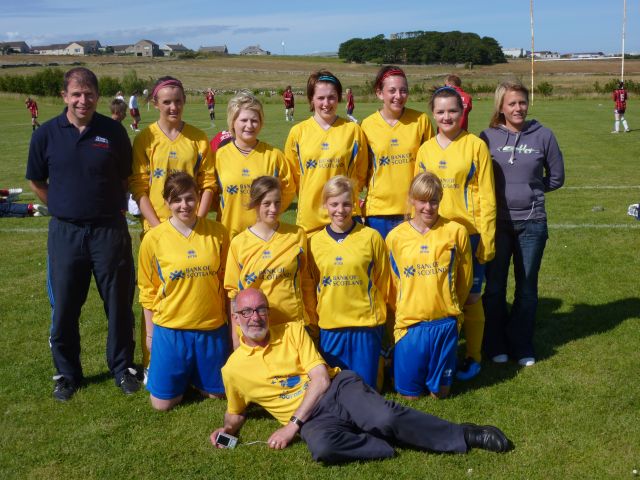 (Above) - Mintlaw Academy - Winners of Under 16 Girls Festival

(Below) - Orkney A v Caithness United - "Anyone seen the ball?" 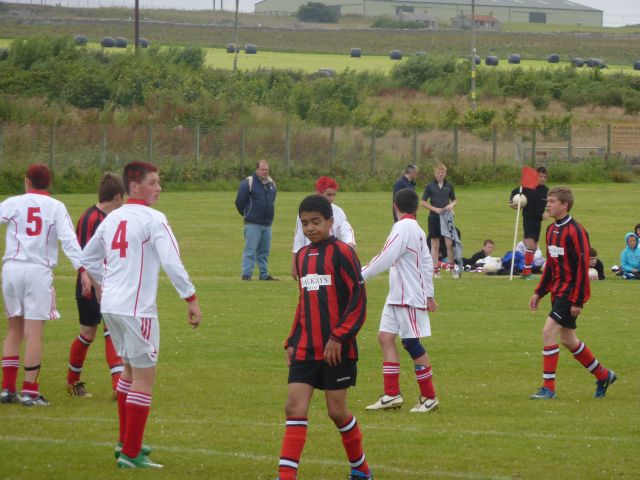 Day 3 of competition was the concluding day of the Girls Under 16 competition with the second set of fixtures between the four clubs. The windy conditions at Picky made difficult playing conditions for all the teams involved.

As expected the two leading teams in the competition Mintlaw Academy and Lochs both won their opening fixtures against Kirkwall and Stromness in convincing fashion. This led to a final match showdown between the two team who incredibly were identically matched in terms of points and goals scored and lost. Lochs were unable to match their heroics of the previous day against the Aberdeenshire side and found themselves three goals down at half-time. The Lewis girls battled hard in the second half and there was no further scoring.

Mintlaw were therefore the deserved winners of the competition, repeating their victory in the 2005 Festival. The younger Lochs team take great credit for pushing Mintlaw all the way, but in the end this was one game too many for their tired legs. Lochs did have the consolation of the leading scorer in the tournament - Hannah Macleod - with a grand total of 21 goals.

In the other game Kirkwall completed a double victory over Stromness.

In the Boys Under 14 competition a last minute goal by Joe Goodland earned Shetland a narrow 1-0 victory over Lewis & Harris which puts them in pole position with one game to play. In a game in which both sides had opportunities to score Lewis & Harris can once again count themselves unlucky to have lost a vital goal in the dying seconds of a match, costing them dearly. Shetland remain the only team with a 100% record in the competition and only require a draw in their final match with Caithness to secure victory in the competition.

The other unbeaten side Caithness United suffered their first defeat of the tournament 2-1 to Orkney A who probably played their best game of the competition. In another tight match Caithness will rue a penalty miss in the second half which would have possibly earned them a vital draw, but the kick was aimed down the middle and straight into the Orkney keeper's arms.

In the final match of the day Mintlaw Academy won their first game of the competition 4-0 against the second string Orkney team. Orkney B had also lost in a morning match to Lewis & Harris by seven goals to one.

(Above) - Goalmouth action from Shetland v Mintlaw Under 14s

The second set of fixtures in the Boys Under 14 competition were played in the morning in perfect conditions at Picky. A defensive blunder allowed Shetland a narrow 2-1 victory over Mintlaw Academy and Caithness United also enjoyed a narrow victory by the same scoreline over Lewis & Harris in what was another tight match. The morning boys fixtures were completed with Orkney A enjoying a convincing win over their more junior colleagues with Lee Wilson scoring a hat-trick.

The third set of fixtures were played in the early evening by which time conditions were overcast and a blustery wind was starting to have an impact on play. In the eagerly awaited clash between the undefeated Orkney A and Shetland, Shetland took advantage of the wind and raced into a 3 goal lead and eventually won fairly easily by 4 goals to nil. Iain Goodlad was the star scoring a hat-trick. Lewis & Harris won their first game of the competiton convincingly by a margin of 7-1 against Mintlaw Academy. Shetland were joined at the top of the league by the dark horses of the competition Caithness United who won their final fixture of the day against Orkney B. Gary Farquhar scored two of the goals maintaining his record of having scored in all Caithness's fixtures so far. Despite being beaten this was a spirited display by the Orkney team.

The first round of fixtures in the Girl's Under 16 competition saw Lochs from Lewis and Mintlaw Academy outclassing their Orkney opponents from Stromness and Kirkwall and scoring a barrowload of goals between them. Hannah Macleod from Lochs ended the day as top striker scoring a total of 15 goals.

The crunch match between Lochs and Mintlaw ended in a nil-nil draw. Although Mintlaw had the lions share of possession they were unable to penetrate a Lochs defence which defended admirably against their more fancied opponents.

Kirkwall won the local derby against Stromness with Steph Tait scoring a hat-trick.

(Below) Orkney supporters enjoy the action

Day 1 saw the first series of games played in the Boys Under 14 competition in sunny but blustery conditions at Pickaquoy. The first two games saw convincing wins for both Shetland and Caithness United.

A strong looking Shetland team recorded the most convincing win of the day - a 7-0 victory against a young second string Orkney team - with Ryan Thomson scoring a double. Caithness Utd took advantage of the wind in the first half to take a 3-0 lead at half time against Mintlaw. A further two goals in the second half resulted in a well deserved win for the boys from across the Firth.

The final game of the day proved the most exciting and competitive. Lewis & Harris played some very classy football to take what looked like a winning 3-0 lead against Orkney A early in the second half. However an excellent spirited comeback by Orkney A saw them score three goals in the last 10 minutes to record an unexpected draw. Darren McLean scored two of the Orkney goals.

As a warm up for the Under 16's Girls competition a Lochs/Mintlaw Select recorded an easy 12-0 victory over an Orkney Select in a friendly match.

Orkney Youth Development Group gratefully acknowledge the sponsors of the 3rd Orkney Youth Football Festival 2009. Many thanks to you all for your contributions: