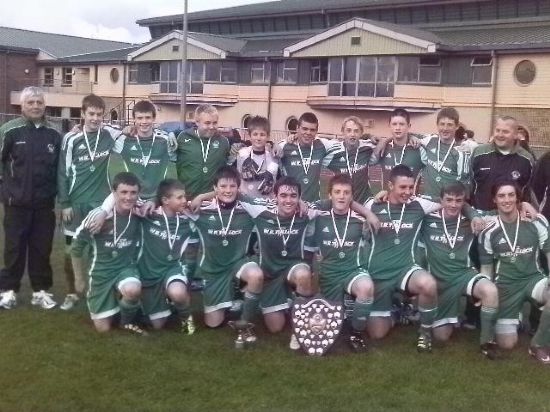 Thorfinn and Stromness served up a rip roaring encounter on Monday night (5th September) in a match which showed youth football at its best. In an end to end match full of attacking football it took extra time to separate two closely matched teams.

As early as the third minute Stromness had the ball in the net but the effort was disallowed as it was ruled offside. Thorfinn then took the initiative firing a number of shots at the Stromness goal but they failed to hit the target. It was Stromness who took the lead against the run of play. A free kick midway into the Thorfinn half was driven into the box and could only be parried by the Thorfinn keeper and Owen Merriman followed up to give Stromness the lead.

It took Thorfinn only five minutes to equalise when Kyran Taylor knocked home from close range. There were chances for both sides in the remainder of the half with Stromness unlucky to see a couple of shots kicked and headed off the line.

The second half continued with the same exciting end to end play with plenty of chances being created. Both teams hit the woodwork, Thorfinn had a goal ruled offside, and both goalkeepers were called into action as shots rained in on both goals, although most were narrowly wide of the target.

With 10 minutes left to play Thorfinn took the lead when substitute Seumas Mackay shot home from close range following a Ben Sutherland cross. Thorfinn piled on the pressure looking for a decisive third and Kyran Taylor smashed a shot off the crossbar. With a minute of normal time remaining and Thorfinn looking to hold on for victory, Stromness grabbed the equaliser. Following a corner David Porteous lurking inside the box headed the ball high into the roof of the Thorfinn net.

So it was on to extra time, and it was Thorfinn who took the lead in the first period of extra time with a fine volley from Seumas Mackay at the edge of the box. Stromness came out fighting in the second period and only some excellent tackling by the Thorfinn rearguard prevented Stromness from grabbing an equaliser. Midway through the second period of extra-time Thorfinn grabbed the decisive fourth goal when Mackay was on hand again to grab his hat-trick as he tapped in after a cross from Jack Stout.

This was a disappointing end for Stromness who had contributed so much to an excellent match, but for Thorfinn a successful end to the season adding the Maurice Walls Cup to the league title.

At the end of the match Jim Cormack, OYDG congratulated both teams on the quality of their football, and thanked Lennie Merriman for refereeing the match, Sandy Keldie for preparing the pitch, and A Flett Ltd for continuing to sponsor the tournament. To round off the evening Marty Flett presented the Cup and winners medals to Thorfinn. 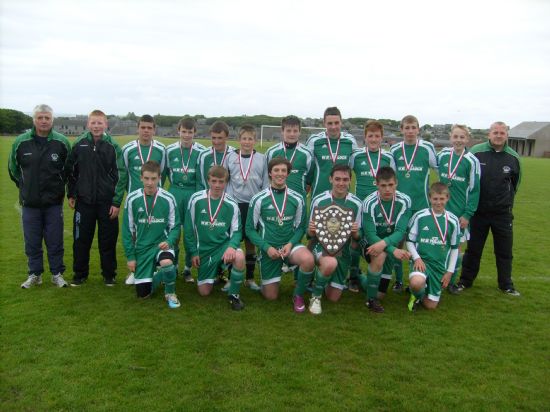 Wednesday night saw the climax of the Under 15's league match as the two top teams Stromness and Thorfinn met in the final league match of the season. A win for either side would see them clinch the league title.

Stromness started the better team hitting the crossbar in the first 10 minutes. They continued to have the better chances and it was no surprise when they took the lead through a Ross Sclater drive halfway through the half. Thorfinn applied more pressure towards the end of the first half and just when it looked like Stromness would take a lead into the half-time break Thorfinn equalised through a fine Kyran Taylor goal just seconds before the whistle sounded.

The second half started again with Stomness looking lively but 8 minutes into the half the complexion of the game changed when a low cross was turned in by Jack Stout to give Thorfinn the lead. This proved a huge boost to Thorfinn and in a stunning 4 minute spell midway through the half they scored a further 3 goals through Darren Maclean and Kyran Taylor (2) to complete his hat-trick and kill off Stromness hopes. A further goal from Ben Sutherland five minutes from time added further gloss to the victory and completed a stunning second half performance by Thorfinn.

At the end of the match Jim Cormack OYDG Chairman complimented the teams on ensuring the league went to a final night decider. Whilst Thorfinn had deserved their victory based on their second half performance he also felt that Stromness were becoming a force to be reckoned with in youth football. The Merriman Shield was then presented to Thorfinn captain Kyran Taylor by Owen Merriman who himself had played in the game as one of the losing Stromness side.

The opening fixtures in the Under 15's league for the Merriman Shield take place on Monday 2nd May when Rovers take on East United at the Bignold and Dounby play Stromness. Kick off time for both games is 6.30pm. Please click here for a full list of the fixtures. Should there be any weather cancellations, the two managers should agree an alternative date. If this is not possible Friday 17th June is the fall back date. 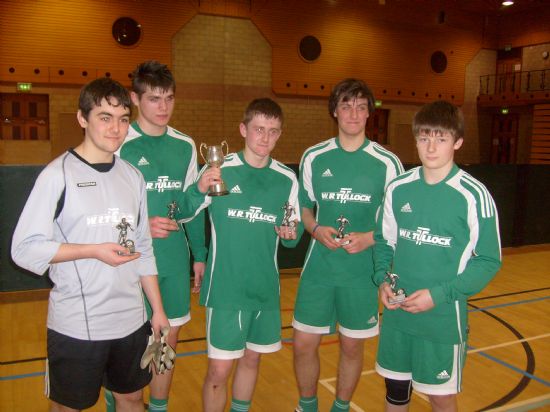 The annual W Hourston Jewellers Indoor 4’s club competition for S4 & Under players was played at Picky on Sunday 6th March. Twelve teams lined up to play in two groups with the top two teams progressing to the semi-finals.

The semi-finals resulted in fairly convincing victories for both teams. Thorfinn A who had won Group A winning all their matches had a comfortable victory over Thorfinn C by 5-2. Winners of Group B Dounby A put up more of a fight against Stromness A before eventually losing 3-1.

With the two best teams in the competiton reaching the final a close match was anticipated. Stromness were looking for revenge having previously lost narrowly to Thorfinn in agroup stage match. However it was Thorfinn who took an early lead in the match and although there were a number of further chances for both teams, this proved to be the only goal of the final. In a highly physical match between two well matched teams Thorfinn probably just deserved to edge the match.

At the end of the game Jim Cormack OYDG Chairman thanked all those who had assisted in running another successful competition and congratulated the winners and runners-up. He concluded by thanking W Hourston Jewellers for their continued sponsorship of the tournament and handed over to Tom Macphail representing the sponsors who presented Thorfinn A with the Cup and Stromness A with the runners-up medals. 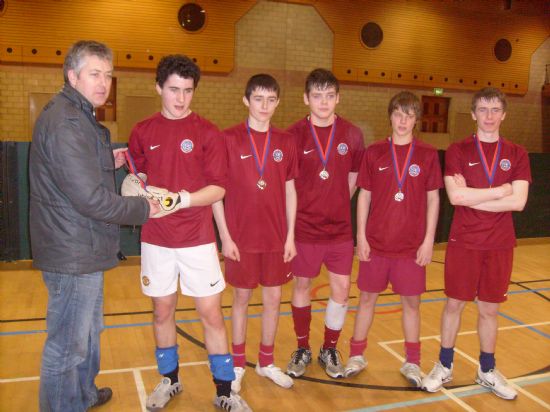