UNDER 12’s COMPETITION WITH SHETLAND CLUBS LERWICK RANGERS AND WHITEDALE

A busy weekend of youth football saw the local clubs joined by visiting teams from Lerwick Rangers and Whitedale from Shetland for two days of Under 12 matches at Picky on Saturday 5th and Sunday 6th September.

Six teams participated in the A League with the four local clubs joined by the visiting Lerwick Rangers and Whitedale teams.  This was a tight league which went to the final match with both the undefeated teams East United and Thorfinn playing each other in a winner takes all clash. Having dropped points in a 0-0 draw with Lerwick Rangers, Thorfinn needed a win whilst a draw would be sufficient for East United.  An excellent game of end to end football saw chances for both sides but neither side was able to take advantage and the game ended goalless to give East the point they needed to clinch the league. 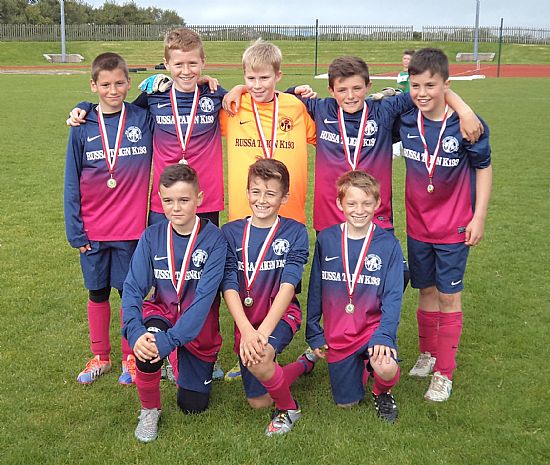 East United A, winners of A League

There was an even tighter contest in the B League with Lerwick Rangers B and East United B setting the pace at the top. Both teams won all their matches on the Sunday although Rangers had to fight all the way to come back from a goal down in the their match against Thorfinn C before scoring a winner in the dying seconds in the match against their Lerwick C teammates. With both teams deadlocked on 28 points the winner was decided by the result in the match between the two sides which Lerwick Rangers won 2-1. 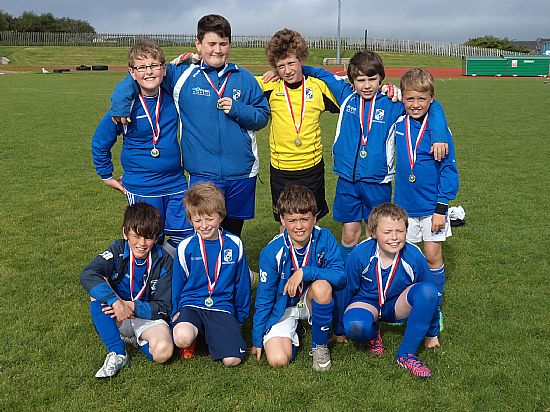 Lerwick Rangers B, winners of B League

At the end of the competition OYDG Chairman Stephen Crawford thanked all the referees who helped out over the two days. He also thanked the Shetland teams for coming down and contributing fully to an excellent inter county club tournament before presenting winners medals to the victorious East United and Lerwick Rangers teams. 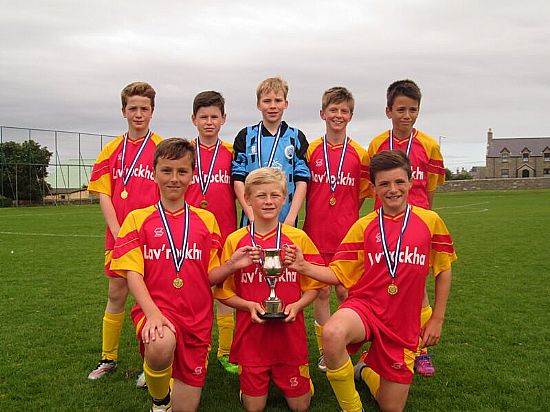 The annual Andromeda Cup 7-a-side competition was played in good conditions at the Gilbertson Park in Lerwick on Sunday 30th August, with Orkney's Under 12's squad looking to continue their recent domination of this tournament.  All three Orkney teams made a positive start to the group stages, playing entertaining passing football throughout and scoring a number of well worked goals.   The boys also defended well with only 2 goals conceded in total in the 11 group games.  Orkney Yellows and Orkney Whites both won their groups convincingly, and a brave effort by Orkney Reds saw them just miss out on a semi-final place.

The semi-finals were tighter affairs but single goals by Archie Atkinson for the Yellows and Craig Harrison for the Whites were enough to see both teams deservedly progress through to the final.  The final was an entertaining encounter with chances at both ends.  However, Orkney Yellows just edged it with a well taken goal from team captain Aiden Foubister enough to see them lift the trophy. 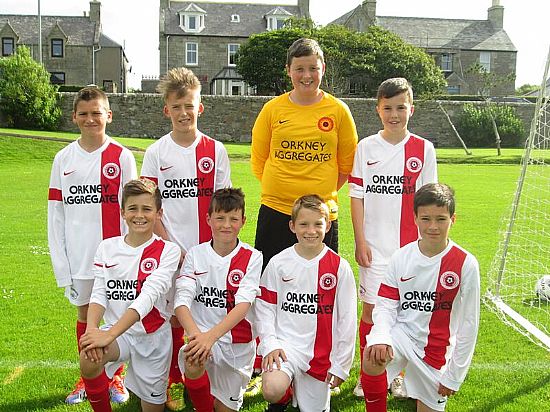 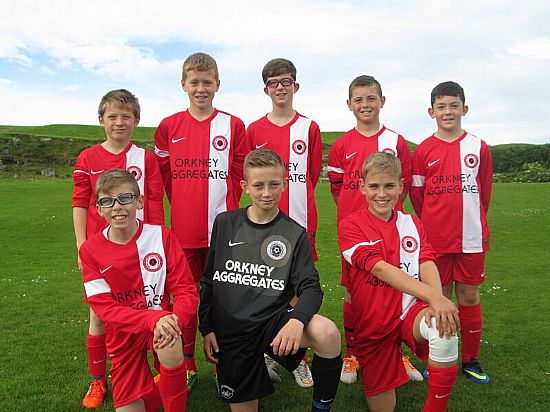 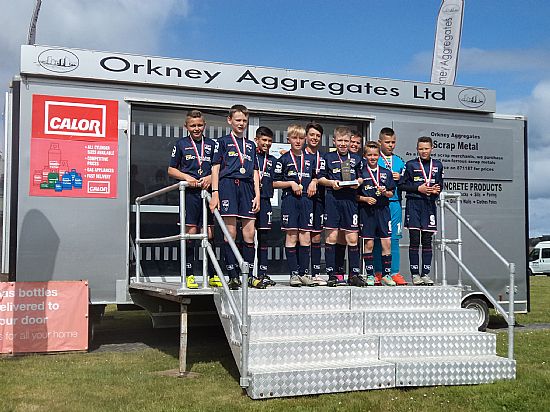 For the second week in a row OYDG welcomed visiting teams from Caithness, Shetland, Ross County and Caley Thistle to Orkney for another excellent weekend of football on Saturday 13th June for the annual Under 12’s Northern Counties 7-a-side competition sponsored by Orkney Aggregates.

The group stages of the competition were tightly fought with only ICT White in Group 1 winning all their matches.  Despite Orkney White securing a notable victory against the other Caley Thistle team in Group 2 it was the Orkney Red team who squeezed into second place in Group 1 to qualify for the semi finals.

In the semi finals the Orkney boys were up against it in their match against ICT Blue and spent a lot of the game on the back foot. However they scored a quality goal in one of their few attacking moments with a perfect Tom McArthur cross being met beautifully by the head of Dylan Cormack for the only goal of the game. In the final Orkney pushed Ross County all the way until a single goal in extra time saw the Premiership club retain the trophy for the third year in a row. This was the best performance by an Orkney team in the competition since 2007 when they won, so the boys should be proud of their efforts. Congratulations to Ross County for winning the title for the third year in a row and well done to all the parents who travelled to Orkney to support the travelling teams. 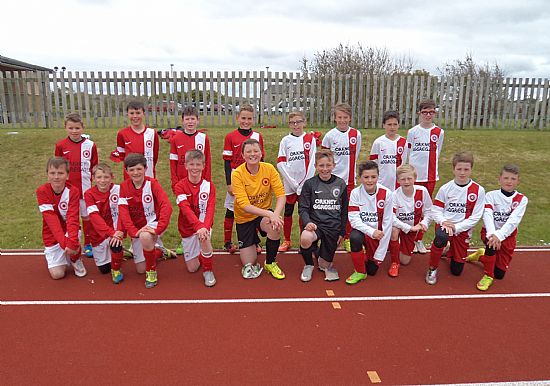 The Orkney Red and White Teams

At the end of the competition OYDG Chairman Stephen Crawford thanked all the referees, the visiting teams from Caithness, Shetland, Inverness Caley Thistle and Ross County, the ground staff at Picky, and the Rugby Club for opening up and allowing the Orkney and Shetland boys to mix prior to the Shetland boys catching the boat home. He then introduced and thanked Roy Brown of sponsors Orkney Aggregates who presented the Northern Counties Trophy and winners medals to the Ross County side.

The full results from Saturday were as follows:- 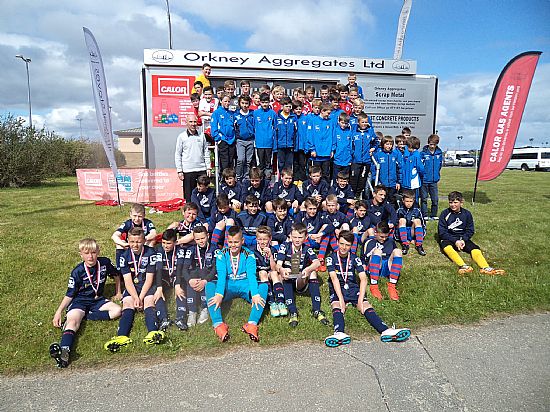 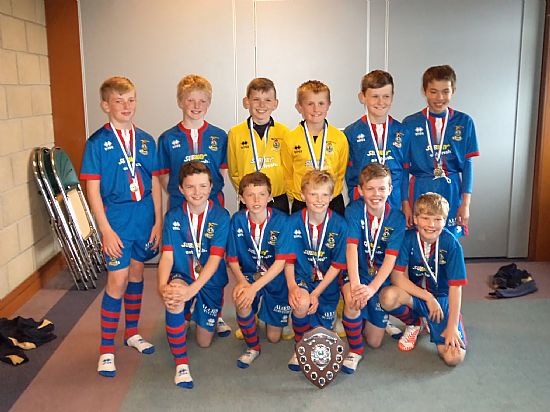 On Saturday 6th June Inverness Caley Thistle were the winners of the first Littlejohn Removals sponsored Under 11’s 7-a-side competition held at Picky and also involving teams from Orkney, Shetland, Wick Academy and Ross County. The Premiership sides showed their class with Caley Thistle winning all of their six matches in the seven team league. In the key match Caley Thistle beat Ross County 2-1. The two Orkney teams performed creditably against top class opposition finishing 5th and 6th with the Orkney B side improving as the competition progressed to win their last two matches against Orkney A and Shetland B.  For the Orkney boys it was their first outing on grass this season due to the lack of playable pitches but they acquitted themselves well on the heavy pitch.

The weather on the day was far from perfect and had players and spectators rushing for cover on a number of occasions to avoid the heavy rain showers. Indeed the presentation ceremony at the end of the tournament had to be held indoors as the heavens opened just as the final match ended. OYDG Chairman Stephen Crawford thanked the referees and the visiting teams for travelling all the way to Orkney to provide an excellent tournament. He commented on the huge benefit to Orkney’s young players of playing against top quality opposition. Finally he thanked Littlejohn Removals for their generous sponsorship of the competition and he introduced Shaun Littlejohn who presented the medals and new Shield to the first winners of the competition, Caley Thistle. The full results were as follows: 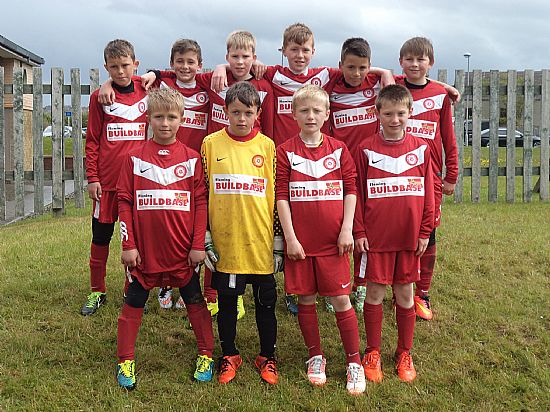 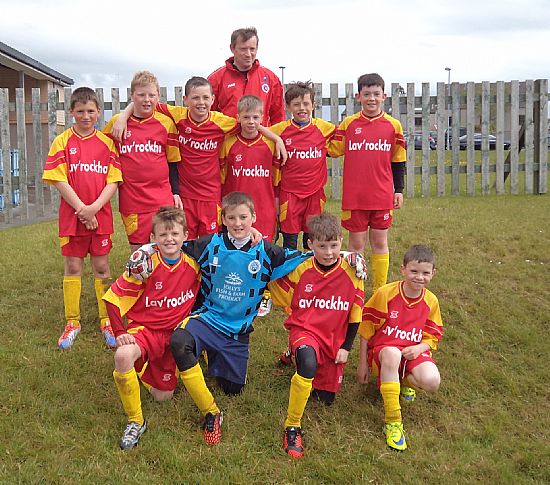 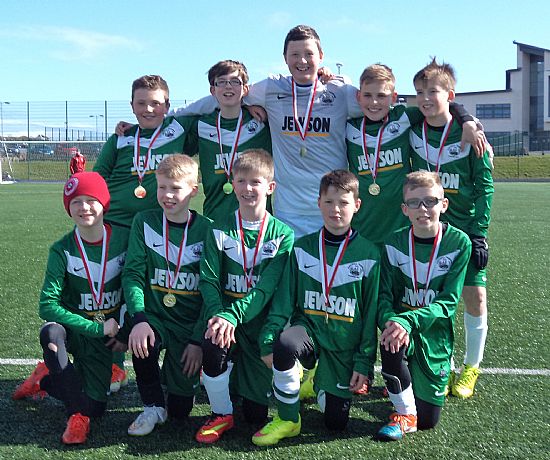 Thorfinn A, winners of the A League

Last Saturday (11 April) saw OYDG welcome Whitedale down from Shetland for the annual Under 12 club competition played on the KGS All Weather Pitch. In cold, windy but dry conditions twelve clubs teams including two from Shetland competed in an A and B league.

There was not much to choose between any of the teams in two tightly fought leagues with 20 of the 30 matches played resulting in draws or single goal victories. In the A League it was unbeaten Thorfinn A who edged out East Utd A who also went through their games without losing a match. Although the game between the two leading sides ended goalless dropped points in their opening match against East Utd B cost the East A team dearly and they had to settle for second spot.

The B League was incredibly tight with the winners only decided on goal difference after the last match had been played. Three teams, East Utd C, Thorfinn B and Thorfinn C all finished level on points and with the matches between the sides all ending goalless the winners were decided on goal difference.  An impressive 5-0 victory in their final match against East Utd D proved critical in providing East Utd C with enough of a cushion in terms of goals to just pip Thorfinn B.

At the end of the competition, Stephen Crawford (OYDG Chairman), thanked the referees and congratulated all of the players on the standard of their football and thanked the Whitedale players and coaches for coming to Orkney for another enjoyable weekend of football. He then handed out winners medals to Thorfinn A and East Utd C.  The full results were as follows:-

East Utd C, winners of the B League