The 2010 S1 & Under outdoor season concluded on Saturday 4th September with the final two cup competitions being completed at Picky. Conditions were favourable although the strong wind provided a challenge for the players. The format for the competition saw 12 teams competing in four group with the group winners progressing to the Cup semi-finals and the second and third placed teams playing for the Plate.

In the main competition the R Clouston Cup, the four seeded teams progressed to the semi-finals. Although there were no shocks in the group matches Midwest A and Thorfinn A had to battle hard to secure narrow 1-0 victories over Thorfinn C and Rovers A respectively to win both their groups.

The semi-final matches were contrasting affairs with East Utd A outclassing Stromness in the first match. The second semi-final was a very tight match with Midwest A narrowly edging out Thorfinn A after a lengthy penalty kick shoot-out. This was after the game had ended level at 1-1 after extra-time. East United dominated the final and led 2-0 at the break. After Midwest A had a goal disallowed for a foul early in the second half, East continued to dominate and went on to score a third for a convincing and well deserved victory. This completed a league and cup double for United, and made up for losing in the final of the same competition last year.

Competition in the Plate was very tight, with both semi-finals being scoreless at half-time in two closely fought matches. With the wind behind them Thorfinn B piled on the pressure and eventually scored to edge out Dounby in the first semi. The second semi-final went into extra time, before a late goal secured a narrow victory for Thorfinn C against Rovers A.  The all Thorfinn final saw the B team score two first half goals to secure victory and another league and cup double following on from them winning the Division 2 league earlier this summer. At the conclusion of the competitions Jim Cormack OYDG Chairman congratulated both teams on a league and cup double and thanked the referees, groundstaff, and the sponsors R Clouston Ltd. Sponsor Bob Clouston then presented the trophies and medals to the winning teams. 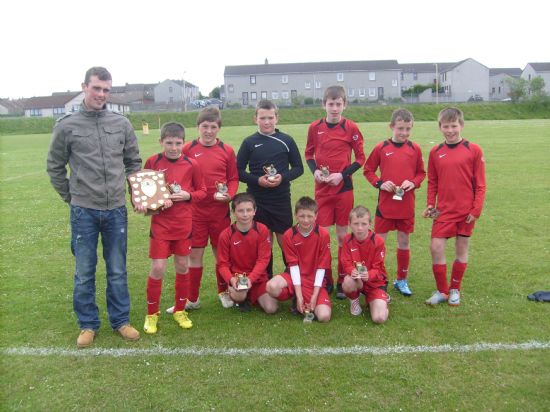 The S1 and under leagues were concluded in cold and windy conditions at the KGS playing fields on Saturday. Needing only a point from their last couple of games to clinch the Division 1 league, East United A raced into the lead in their first game against closest rivals Thorfinn A. Despite Thorfinn equalising East scored a late winner to deservedly win the game and the league title. With the league in the bag East United cruised to a 6-0 victory in their final match of the season against Stromness. For East who contained a number of the players who won this year’s primary indoor football league the future looks bright. With Thorfinn slipping up Midwest took full advantage to clinch second spot in the league.

Competition in Division 2 was a lot tighter with both Thorfinn teams ending up level at the end of the season on equal points. With both teams having drawn in the games between themselves they were required to have a play-off to decide the league winners. Surprisingly this match was not so close with the older and stronger Thorfinn B team powering themselves to a 4-0 victory to clinch the league. 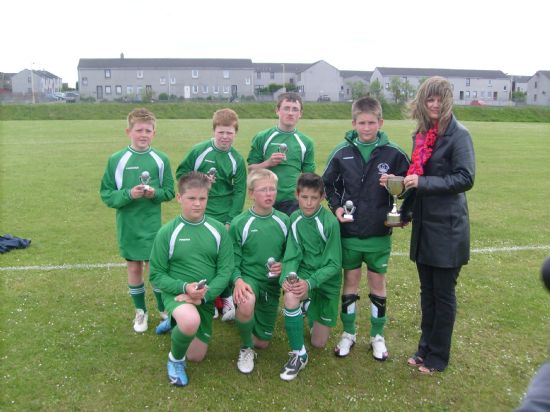 At the end of the competition Jim Cormack OYDG Chairman congratulated the winning teams and praised all the teams for the high standard of football. He also thanked the clubs for running the competitions and the Kemp family for their continued sponsorship of the leagues. Representing the family Thorfinn Kemp presented the EG Kemp Shield and winners medals to East United and Jill Robb presented the BW Kemp Cup and medals to Thorfinn B.

The fourth week of fixtures in the S1 & Under leagues were completed in Stromness on Saturday. In Division 1 East Utd A edged closer to the league title and now only need one point from their remaining two matches to become champions. They did however lose their perfect 100% record when they dropped their first points of the season after being held to a goalless draw by Midwest A. Thorfinn A moved into second spot in the league after winning both their games.

Its all to play for in Division 2 with both Thorfinn C and Thorfinn B neck and neck at the top. They played each other in what could have been a league decider but for the second time this season honours were even. Thorfinn B took an early lead through a penalty but a second half equaliser saw the game tied at 1-1. A draw was a fair result and if both teams win their remaining two fixtures they will have to face each other again in a league title decider play-off.

The S1 & Under football leagues have reached the halfway stage after the third week of fixtures played in Finstown on Saturday morning. East United A remain undefeated in Division 1 and consolidated their position at the top of the league when both of their nearest rivals Midwest A and Thorfinn A dropped points in goalless draws against Dounby A.

Both Thorfinn teams remain undefeated at the top of Division 2 with Thorfinn C leading by 4 points but having played one more game than their club mates Thorfinn B. Both teams meet this weekend in what could well be a league decider.

The second week of fixtures in the S1 & Under leagues were completed in bright but blustery conditions in Holm on Sunday morning. In Division 1 East Utd A have established themselves as favourites following victories against two of their closest rivals Midwest A and Thorfinn A. Defences were on top for most of the match between Midwest A and East Utd A before a late goal gave the East side a narrow 1-0 victory. Two second half goals earned them another good victory against Thorfinn A to maintain a perfect 100% record after four games.

Division 2 appears to be turning into a two horse race with both Thorfinn teams neck and neck at the top having established a clear lead over third placed Dounby B.

The S1 & Under leagues kicked off in ideal conditions on Sunday morning in Dounby.

Six teams are competing in Division 1 for the EG Kemp Shield and after each team had played their first two games it was East Utd A and Midwest A who lead the pack winning both their games. East Utd A containing most of the players that won Division 2 in style last year comfortably won their opening games and look like they will one of the favourites for this years competition. Midwest A and Thorfinn A will also be pushing East Utd A all the way and in the top match of the week Midwest beat Thorfinn by a single goal.

Seven teams are competing in Division 2 for the BW Kemp Cup and this league always provides enjoyable viewing as it is where many of the younger players experience competitive outdoor club football for the first time. Setting the pace after Week 1 are Thorfinn B who despite dropping their first points of the season against clubmates Thorfinn C will be one of the main teams to beat in this league. Full results as follows:

The S1/S2 W Hourston Jeweller Indoor 4's were played at Picky on Friday 12th March with a total of 13 teams competing.

Above - Runners Up East United

Friday night saw the annual S1 & S2 Indoor 4`s take place at Picky once again generously sponsored by W Hourston Jewellers With 13 teams taking part, they were split into 2 groups with the winners and runners up progressing to the semi finals. As the tournament progressed it turned out to be one of the closest we have seen in years with few teams able to qualify prior to the last group games being played

In the semis East United A had a comfortable 3-0 win against Thorfinn C and Stromness A had a comfortable 4-1 win against Rovers A The final itself proved one game too far for the young East team who were by now looking very tired and rarely troubled Stromness A who comfortably won the game 2-0 The presentation of trophies was held after the final match was played. Jim Cormack, OYDG Chairman opened the presentation ceremony by congratulating the winning team. Stromness A and also made mention as to what a good week Stromness were having with the Stromness Predators winning the Reid Crescent Shield the previous week in the Primary indoor. Jim thanked all those that had contributed to a successful competition in particular East United and Dounby for running the competition. In conclusion he paid special thanks to Bryan Clark representing the sponsors W Hourston Jewellers for once again providing the winners and runners up trophies.