On Sunday 23rd January 2011, Orkney was rather well represented at the premier winter music festival in Scotland, Celtic Connections.  The website masthead boasts 1500 artists, 300 events, 18 days and 14 venues.  Well, one of those artists was The Big Orkney Song Project, one event was our concert, and the venue was St Andrews in the Square.

This is how the Celtic Connections website sold our concert (tickets were £12.50):

While predominantly known for fiddlers, Orkney also has its own distinct song tradition. That much has certainly been proved by the Big Orkney Song Project, a two-year, Lottery-funded initiative to reinvigorate this heritage, by collecting, cataloguing, notating, teaching and performing songs “about Orkney, written in Orkney or with an Orkney connection”. The resulting archive is set to number around 1000 items, including new adaptations and original compositions by Orkney musicians. A line-up of this home-grown talent, including singers and project leaders Sarah Jane Gibbon, Emily Turton and Aimee Leonard, perform a selection of gems from this freshly restored treasure-trove.

Amongst the finest exponents and ambassadors of both heritage and contemporary Orcadian music and song, Saltfishforty will deliver a set of archive and self-penned material. Likewise, Frank Keenan and his multi-instrumental band – Login’s Well – will showcase both past and present vocal output from the islands’ vast cultural pockets.

Amidst the scale and grandeur of some festival events, this concert will refreshingly feature one of Orkney’s best-kept vocal secrets, Thora Linklater, who was only recently introduced to the humble microphone, through the project’s showcase concerts throughout the county. Alongside the three co-ordinators, eight members of the project’s Song Shop Choir will also perform material recorded from the archive.

Holding the fort in his own inimitable style is the legendary Billy Jolly. A captivating singer and story-teller, Billy possesses the natural charm to be able to cover any length of stage changeover with just his voice, his moothie, and the decades of stories and songs inherited through a lifetime living and working in Orkney.

Most of us travelled down on the Saturday, so needed two nights accommodation.  It’s unusual for Celtic Connections to pay for two nights accommodation, as they usually only want to pay for the night of the performance, but as it was explained to them – if the flight doesn’t go on Sunday due to bad weather then you have no concert, as 95% of the concert will be on the plane!  This meant we had a Saturday evening to spend at the festival.  Some of the party stayed in the hotel sleeping (Emily particularly, who was suffering from jet lag after her holiday), some went out for a lovely long evening meal (Jackie and Thora), but some went to see Lau and Crooked Still (both of whom have performed at the Orkney Folk Festival) in concert.  It was rather nice at the gig when they were introducing the members of Lau to the concert – “Kris Drever….. from Orkney”.  Big cheer!

Much of Sunday was spent in rehearsing, sound checking and getting ready before the concert on Sunday night.  Kick off time 7.34pm.  Ok, we were 4 minutes late because one of the ‘doofers’ (voice recorder on which the notes for the Accapella singing are saved) was still in the pocket of a rehearsal outfit!  A stressed phone call to the hotel resulted in the doofer getting a taxi all to itself to the concert venue!

Our compere for the night was Billy Jolly.  He had the audience eating out of his hand, and could have almost sustained the full time by himself.  First up, he introduced the Song Shop Trio, Aimee Leonard, Sarah Jane Gibbon and Emily Turton.  They were joined in their set by Alex Leonard.
Next up, Thora Linklater gave the first of her two songs, accompanied by Emily on bodhran.
This was followed by Frank Keenan with Logan’s Well.  Logan’s Well consists of John Adams (bass and harmonies), Steve Miller (wind instruments), Aimee on bodhran and harmonies,  Marcia Humes (keyboard and harmonies) and Mark Shiner (harp and mandolin.  Mark made the mandolin specially for the purpose (he’s an instrument maker!)).

After a short break, Loomashun sang three songs.  All members of the Song Shop Choir, Loomashun consisted of those folk who had made a special effort throughout the project, supporting the SongShares or attending the island gigs.  Loomashun consisted of Aimee, Sarah Jane and Emily (hiding at the back!), Ali Skene, Lal Leitch, Adele Muir, Mary Duncan (WHO FLEW ALL THE WAY FROM SOUTH AFRICA TO JOIN US!), Kirsty Macdonald, Liz Austin, Lynn Campbell, Jackie Ward and Marcia Humes.  Their set was also joined by Alex and Douglas Montgomery.

Following the lasses, another couple of lasses, with Thora singing the second of her original songs, this time accompanied by Aimee and Douglas on fiddle.

To round the evening off Saltfishforty, Douglas Montgomery and Brian Cromarty, gave us a rousing set of tunes.  One of them was a song without any words, or a tune in other words!  Brian told us that Douglas had written the lyrics to it…  They were also joined on stage by Mark and the Songshop Trio.

The final ‘stramash’ had everyone on stage, to sing a particularly upbeat version of The New Year Song (North Ronaldsay version).  Whoops and cheers from the audience had everyone back on stage for the concert closer, a sweet, harmonious and gentle Orcadian Cradle Song.

The almost sell-out audience were very appreciative of the evening’s entertainment.

We thank everyone for their time, their energy, their enthusiasm and their love of singing and the project.

Thank you to everyone who has been part of this project.  It’s been a privilege and a pleasure.

Click here to read the text of a review on the Northings website, written by Norman Bissell.  You can find the original by clicking here. 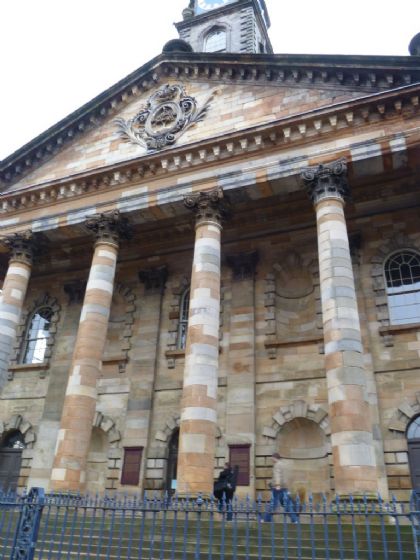 Our rather stunning venue, St Andrews in the Square, Glasgow. 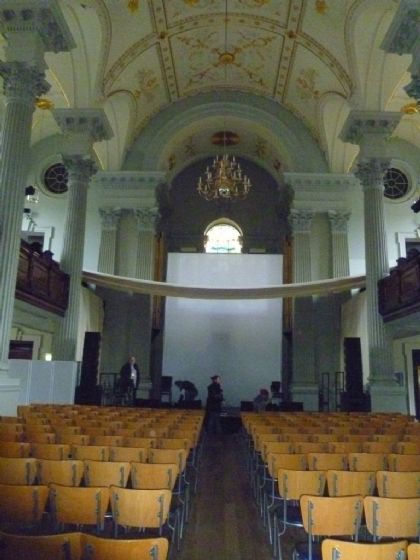 The interior, stunning even before the lights were turned on. 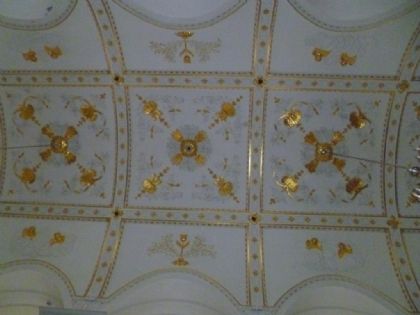 A detail of some of the gold work which adorned the walls and roof. 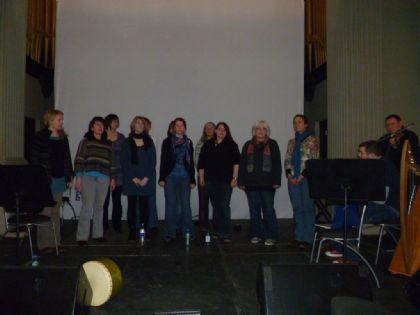 Loomashun in rehearsal.  Sadly, the only photo we currently have as BOSP's [un]official photographer was on the stage at the time... 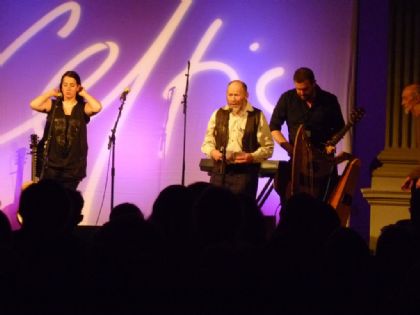 It begins!  Billy Jolly introduces the Song Shop Trio, with Emily and Alex appearing in the photo. 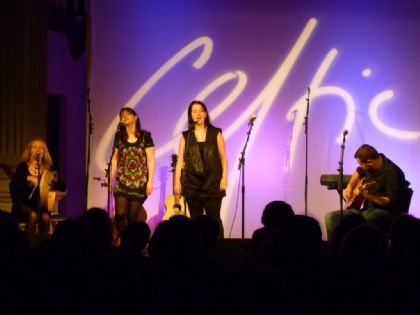 The Song Shop Trio, Aimee, Sarah Jane and Emily with Alex on guitar. 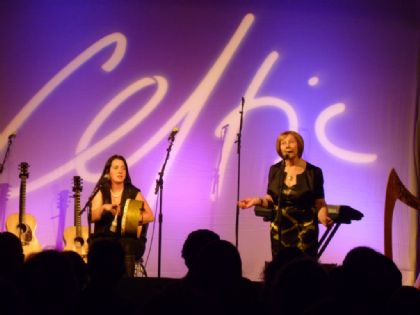 Thora Linklater, with the first of her two songs, accompanied by Emily. 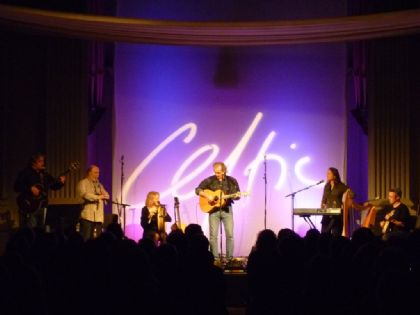 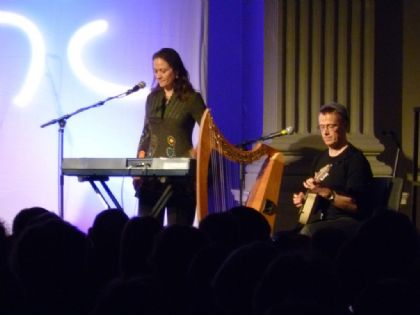 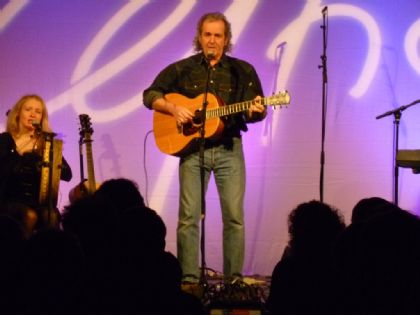 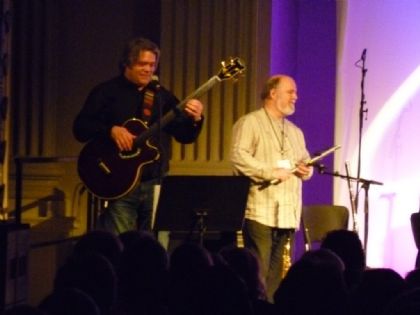 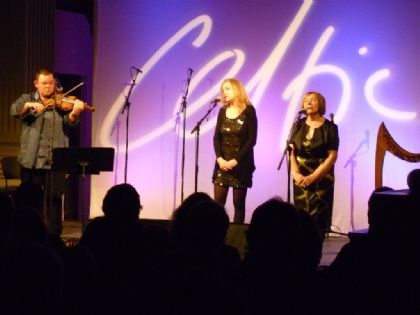 Thora was after Loomashun in the second half, here accompanied by Douglas Montgomery and Aimee. 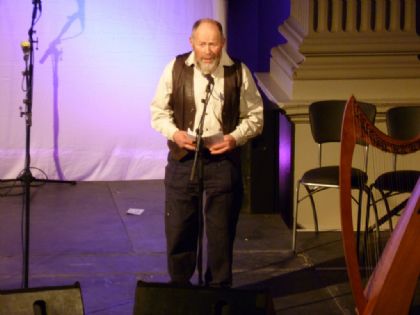 Our superb compere and entertainer for the evening, Billy Jolly. 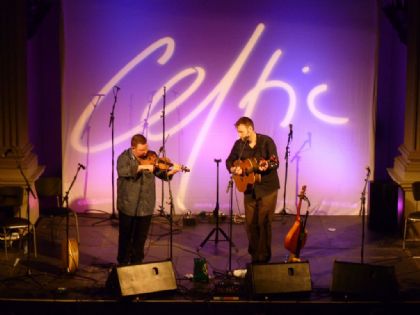 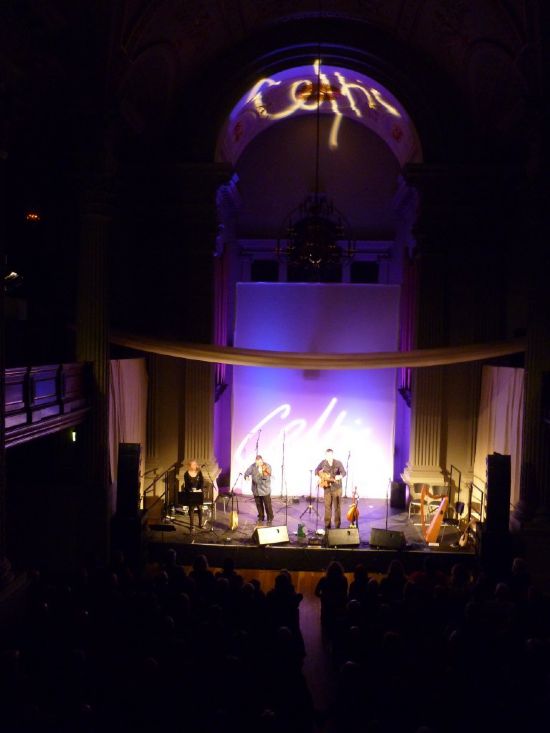 Our stunning stage, with Saltfishforty on it. 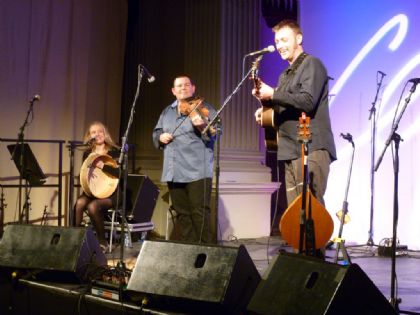 Saltfishforty were joined by Aimee... 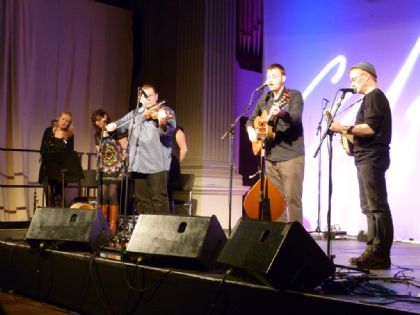 ...and then by Sarah Jane, Emily (who's arm you can see sticking out behind Douglas) and Mark.