Weekend of Islands Song, 19 & 20 November 2011
Building on past experiences with workshops such as the Celebration of Orkney Song (November 2007) and the Flaming Dames workshop (2006), we gained funding from Scotland's Islands to enable us to take artists from Shetland, the Western Isles, Highland and Aberdeenshire (ok, Highland and Aberdeenshire aren't islands, but they are part of the geographical area covered by our project) to visit us in November 2011 to entertain and teach us about their native song tradition.
We also hosted two concerts; in Kirkwall on Saturday 19th November in the St Magnus Centre, and in Stromness on Sunday 20th November in the Stromness Town Hall.
Our Islands Song Workshop Weekend took in the singing talents of the brilliant folk below.
Shetland: 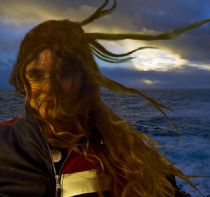 Lise Sinclair is a singer, musician and poet from Fair Isle in Shetland, who uses the musical and language traditions of the Northern Isles. Her songs are inspired by her homeland and heritage and are steeped in the music and language traditions of the Northern Isles.  Recordings/publishing includes Ivver Entrancin Wis’; ‘Under the Evening Sky’; ‘White Below’; ‘here’ & ‘EmptyOcean’ for Radio 3. She is currently writing a series of songs based on the stories in George MacKay Brown’s ‘A Time to Keep’ to be premiered in Orkney, March 2012. Link
Orkney:

Dave Morrison sings and plays guitar with passion about life's rich experiences and challenges, tragic and joyous. He has the knack of capturing the essence of strong emotion and connecting this with the listener through his moving ballads and quirky, captivating music and voice. Originally from Edinburgh, Dave has lived in Orkney for the last ten years and draws inspiration from his stunning surroundings and the people he has met. His songs have hints of jazz, blues, country, folk and world music. Each song is a unique slice of life. Link
Aberdeenshire:

Shona Donaldson Singer and musician Shona is one of Scotland's leading young tradition bearers. She was voted The Citty Finlayson Scots Singer of the Year at The MG ALBA Traditional Music Awards in 2009, and was recently Singer in Residence for Deveron Arts in her home town of Huntly. Here she taught local songs and traditions to schools as well as compiling and editing a book of songs. Shona’s CD “Short Nichts and Lang Kisses” was released in April 2011.   Shona also teaches at bothy ballad and ballad workshops, passing on traditional singing to all ages and abilities, underlining the importance of keeping our traditions alive. Link
Western Isles:

Norrie "Tago" MacIver comes from Carloway in the Isle of Lewis. He left Lewis at the age of 15 to attend the National Centre of Excellence in Traditional Music, where he studied accordion, guitar and singing. While in Plockton he became a member of the band Bodega, who went on to win the BBC Radio 2 Young Folk Awards. Norrie is also a member of the all-male singing group Na Seoid under the direction of Mary Ann Kennedy. With Bodega and Na Seoid and as a soloist, Norrie has played at festivals all over the country. Link
Orkney:

The Song Shop Trio perform a wide variety of songs in three-part harmony. Inspired by Orkney, the songs they sing reflect the timelessness, tragedy, and romance of island life. Known for revitalising old songs from the islands, they have reworked age-old melodies to bring the long forgotten songs of Orkney back into the singing tradition. The vocals of Aimee Leonard, Sarah Jane Gibbon and Emily Turton, accompanied by Aimee on bodhran and Alex Leonard on guitar, create an enchanting sound blending the old and new in a unique contemporary folk style.  Link
Highland:

Findlay Napier Heavily influenced by the music of Elvis Costello and Loudon Wainwright III Findlay’s catchy sing-along songs have been likened to that of Ben Folds or a Scottish Ian Dury. Nominated as Songwriter of the year in the 2010 MG Alba Music Awards Napier has been emerging as a writer and performer of increasingly impressive stature. Napier hails from Granton-upon-Spey, now lives in Glasgow, and is a graduate of the Royal Scottish Academy of Music and Drama. He released a new album with his band Findlay and The Bar Room Mountaineers in May this year.  Link

This event has been supported by Scotland's Islands.