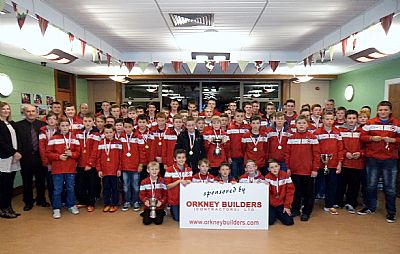 The 2014 County squads were presented with their medals by Charlie Kemp from sponsors Orkney Builders at last night's presentation ceremony at Picky.

Highlights of the season were:-

Under 11’s retaining the John W Shearer Cup against Shetland;

Under 12’s regaining the John Manson Trophy against Shetland;

the Under 13’s unbeaten in six matches at the Highlands & Islands Football Festival – the only team not to lose a game; and

the Under 15’s 3-2 victory against Caithness to win the Loisburgh United Memorial Cup.

Well done to all the squads.