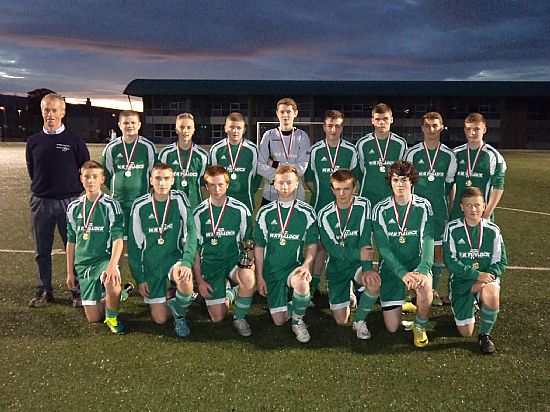 The Under 15’s season ended on Monday night (21st September) at the KGS All Weather Pitch with a cracking Maurice Walls Cup final which saw Thorfinn edge out Stromness 3-2 in an all action match that kept the crowd entertained from start to finish. Star of the match was Thorfinn’s Oskar Stout who scored a spectacular hat-trick to deny Stromness a league and cup double.

The scene for an exciting match was set with two goals in the opening five minutes. Callum Crawford opened the scoring for Stromness with a clinical finish in the box but the lead was short lived as Oskar Stout equalised with a cracking shot from distance. Stout was denied a second by the post but 20 minutes into the match he scored his second after a fantastic solo run from the halfway line, to give Thorfinn a narrow 2-1 lead at the break.

Stromness piled on the pressure at the start of the second half in search of an equaliser and had an Owen Young tap in after Sam Hunter rattled the Thorfinn bar ruled offside in the opening minute. Both keepers were called into action producing excellent saves before Oskar Stout completed his hat-trick with another fantastic strike from distance, a carbon copy of his first goal.

Despite being two goals down Stromness looked dangerous and midway through the half they were awarded a penalty after the ball struck a Thorfinn hand in the box. There was further drama as Cameron Fraser in the Thorfinn goal produced an excellent save from Sam Hunter’s penalty, but the referee ordered that the kick be retaken as a Thorfinn player had encroached into the box. Hunter made no mistake second time round to bring Stromness right back into the match.

There were narrow escapes for both keepers in the closing minutes as Stromness went in search of an equaliser and Thorfinn tried to extend their lead but the final whistle went with the Kirkwall side holding on for a narrow victory. At the end of the match OYDG Chairman Stephen Crawford thanked referee Ivan Leslie and sponsors A Flett & Co, before congratulating both teams on serving up the best match of the Under 15 season. Marty Flett then presented Thorfinn with the winners medals and the Maurice Walls Cup.

This was a fitting end to a frustrating weather disrupted Under 15 season which saw honours shared with Stromness winning the league with a perfect record winning all their matches, and Thorfinn preventing the double with a deserved victory in the final match of the summer. 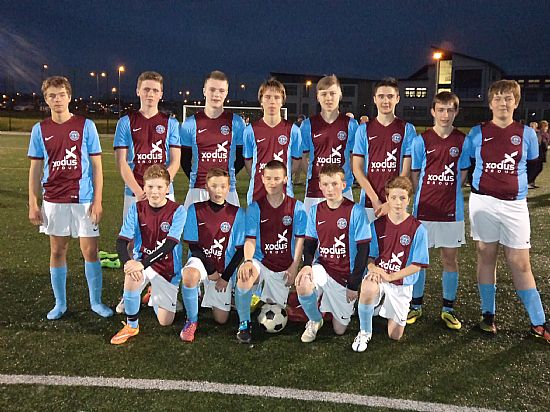 Stromness, winners of the Merriman Shield 2015

*Stromness and Dounby both deducted 3 points for fielding ineligible players