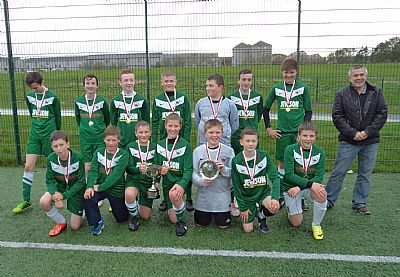 In the R Clouston Cup Thorfinn A scored a narrow 1-0 victory over East United A in a closely fought semi-final before facing the league winners and cup favourites Stromness A in the final. After taking the lead with a scrambled goal early in the second half Thorfinn were forced onto the back foot for the rest of the match, relying on breakaways to trouble the opposition. Stromness nearly snatched an equaliser when they hit the post with seconds to go but in the end Thorfinn’s determined spirit in a very competitive match allowed them to successfully defend their lead.

The Plate final was an all Thorfinn affair and in another tight contest a single goal was enough was enough to secure a narrow victory for Thorfinn B over a younger Thorfinn C team.

Full report and photos on S1 & UNDER page.