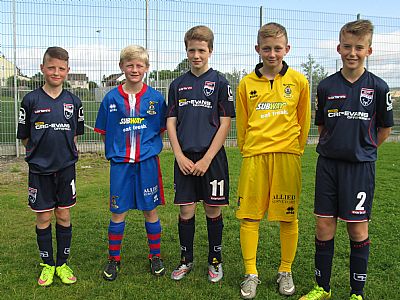 The quality of youth footballing talent in Orkney was reflected in last week’s Ross County versus Inverness Caley Thistle Under-13’s Highland derby in the Club Academy Scotland programme when a record five members of the current Orkney under-12’s squad who are signed up to play for the two Highland Premiership clubs at Under-13’s level over this winter participated. Playing for Ross County were Craig Harrison, Owen Young and Charlie Corsie with Findley Cooper and Aidan Foubister in the opposition Caley Thistle side.

In addition at the older age levels Ryan Harcus (Ross County Under 14’s), Jay Foubister (Caley Under 14’s) and Sam Hunter (Caley Under 15’s) were also involved elsewhere in their respective derbies on the same weekend. Fantastic to see so many Orkney boys making grade at this level and and best of luck to all the lads in the season ahead