Orkney and Caithness Under 15’s served up an excellent display of end to end attacking football in an entertaining match played at the KGS All Weather Pitch today. The final result of 3-2 to Caithness was a sore one to take for the Orkney boys who dominated possession for large spells of the match and created the majority of the chances in a match where both sides created a barrow load of goal scoring opportunities. Goal scorers for Orkney were Glen Scott in the first half and Oskar Stout in the second half. Orkney’s Ewan Scott was particularly unlucky seeing his shot hitting the post early in the second half and smashing another shot against the crossbar midway through the second half. Credit to the Orkney lads for putting up a fantastic performance and well done to Caithness for retaining the OYDG Quaich for a fourth year in a row. 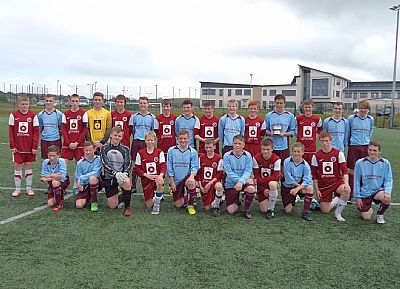