The Orkney Brewery Comp took place on the 7th of June 2009 the fishing was very patchy and the scores speak for themselves with 4 anglers failing to land a sizeable fish. A full boat asccounted for the following results

The results as follows.

Alan Wilson who all failed to land a sizeable fish.

Heaviest fish of the day was a 3.85 kg Ling caught by Peter Robertson.

Well Done all and looking forward to some better fishing in the July Comp.

On Saturday the weather was fair and sunny with light winds so it was decided to head north past the Black Craig as far as Skaill. Securing mackerel bait, our first stop was out off the Brough of Bigging, south of Yesnaby where all the fishers were scoring withgood sized ling, a few cod, and a good supply of big spurdogs. The catch-and-release system operated for this competition gives a score for each fish dependent on its length rather than its weight so after measuring in a plastic rhone pipe the fish can be released quickly into the sea again and the angler gets a coloured token, the token scores being totted up at the end.

When the catching went a bit slack, a move north to Rowe Head was made and then a try south along the coast but no good scoring was made until we were back where we started – small coleys and mackerel don’t score unfortunately. At the end a good Pollock was taken at Mouseland.

With an increasing strength to the S/E wind far above various forecasts, the fishing on Sunday was restricted to the face of Hoy as far south as the Old Man, judiciously taking advantage of the shelter of the high cliffs. The fishing was "dour" to say the least and most were glad to make a score at all. A scattering of ling and a few hard-won pollock were all that could be enticed from the grey wind-torn ocean when heavy leads and oilskin coats were in order and anything not weighed down blew away.

Heaviest fish over the 2 days -- 1st Paul Firth with a 5.4kg spurdog

The trophies and the main prizes, generously sponsored by Northlink, were presented by Cynthia Spencer, development manager of Northlink

Orkney Islands Sea Angling Association would like to thank Northlink for their very generous support of this competition.

Also thank to Aurora for other prizes and finally thanks to Ronald Tait, our skipper for the two days, who, unlike the weather, always shows a cheery face. 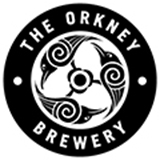