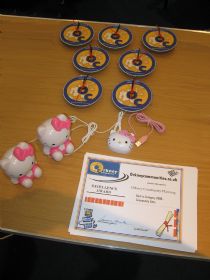 The OOWAs were be awarded in the following categories:

with an additional prize for the Best Use of Graphics, and of course the everlasting glory of Supreme Champion. Each winner received a handcrafted Orkneycommunities commemorative clock, and the winners of the Graphics and Supreme Champion prizes receive d further prizes which were described as 'undeniably useful, yet thought provoking'. It should be noted that while our prize budget was limited, our imagination was not!

Judging was carried out by members of the Orkneycommunities committee, selected so no conflict of interest would occur, following a marking scheme which looked at Appearance, Content, Navigation, and Currency and Accuracy of Information. The marks from the judges were collated to give the category winners, and the Supreme Champion chosen form these five by a further panel. Sites making good use of graphics were highlighted during the original marking, and considered by yet another panel to determine the Best Use of Graphics prize. 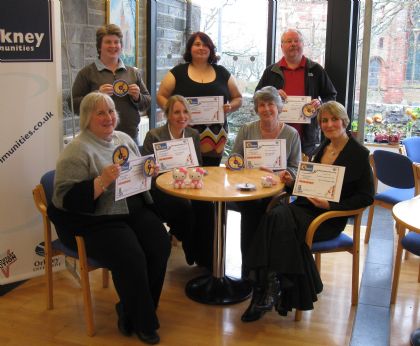 In the Communities section 24 sites were competing, but the judges narrowed it down to two very different sites: the Orkney Community Planning Partnership site, which has an ongoing role in consultation and communicating the community planning message, and the KGS Reunion 2008 site, which was set up solely for one event which has now passed successfully, and which was both vibrant, interactive, and occasionally hilarious.

In the end the winner by a small margin was the Orkney Community Planning Partnership, a fine all rounder by all our judging criteria.

Four sites stood out from the 20 in the this category: Homestart Orkney; Orkney Helping Hands; Orkney Disability Forum; and DASAT.

This was a difficult section to judge in some ways, as many of the sites had no need to be regularly updated, and this was taken into account. Again a very diverse group of sites, with Orkney Helping Hands perhaps fulfilling the most exotic role in supporting Barbara Ann McVean's work with street children in Bolivia, and providing a fascinating blog of her work.

Helping Hands would have been a worthy winner, but in the end Homestart edged it by a small but clear margin due to the attractive appearance of the site, tasteful use of graphics and quality of information provided.

Development formed a smaller category of 12 groups with a very similar purpose. Whilst side by side comparison was easy, choosing a winner was still difficult, as the collected scoring had Orkney Zerowaste, Shapinsay Development Trust and Westray Development Trust in a virtual tie.

After further deliberation Shapinsay emerged as the narrow winner, partially based on the active use made of the site in the recent windpower poll, and also in the excellent use of the Event's Calendar.

Webmistress is Nickie May, and the set was set up by Debbie Serjeant.

23 groups fought it out in a category covering a diverse range of sports including darts, sailing, karate, football, angling, diving, golf and all things equestrian.

Both the Motorcross Club and Holm Sailing Club have been at the cutting edge of what is possible with Orkneycommunities sites for a number of years now, but in the end the Orkney Carriage Driving Group edged it with the judges through sheer exuberance and comprehensiveness.

The final category is the smallest, consisting of 11 sites, but like Development turned out to be one of the closest, with Orkney Field Club, Orkney Singers, and Friends of the Orkney Boat Museum virtually neck and neck.

Orkneysingers is one of our newest sites, and so had done very well to be a contender, but the deserved winner was Orkney Field Club, with excellent in-page navigation, general layout and sophisticated use of tables, all done within the old editing system which does not natively support this. However the new editing system does, so hopefully the Field Club site can give everybody some good ideas, and hopefully they will consider migrating to the new system sometime as well!

Best Use of Graphics

This was an incredibly hard prize to judge, with 5 sites shining through, for different reasons.

DASAT and the Orkney Field Club are both sites that work within, yet go beyond the limitations of the old editing system, and illustrate their sites economically yet effectively. The Field Club site is an exercise in taste, with the detailing of dark lines around the menu and header, shading, pinstriping of info boxes, clickable headings and custom horizontal rules- it only has about 6 pictures, but graphically it looks good.

Orkney Disability Forum has a well branded site, that expains its services very well through captioned pictures, and applies personal touches through introducing the faces who provide the service.

Stromness Ladies Golf Club site is also tastefully colour keyed to match its brother site (Stromness Golf Club) but shines through a wealth of excellent and topical pictures from competitions and from what is clearly a vigorous social side! Undoubtedly the most effective use of pink rabbits in an Orkneycommunities site!

Stromness Sailing Club also stand out for similar reasons and showcases fine sequences of pictures from regattas and competitions, and remind us at this time that we did have a reasonable summer.

It came down however to two sites, ODF and Stromness Ladies Golf Club, with the lady golfers just swinging it due to the variety of ways that pictures were used on the page, and also by using them for navigation. More captions would allow the rest of us to work out what the hell was going on in some pictures though!

The winner of the best graphics prize received a sophisticated computer pointing device, in the unlikely form of a 'Hello Kitty' optical mouse, with the buttons at the ears.

Five sites went forward, but all four judges independently agreed that two stood aloft as the contenders for the Ultimate Prize: Orkney Field Club and Shapinsay Development Trust. Even more remarkably all agreed that though either site would be an excellent Champion, the winner should be the Shapinsay Development Trust, for the way that it engages with its community through news, events, and topical information, and seeks to engage more. They are a worthy winner, and hopefully this success can spur them on to even greater things!

The winner of the Supreme Champion prize received a beautiful pair of 'Hello Kitty' computer speakers, sourced from the far reaches of the former British Empire.

Thanks to all the sites and all the webmasters, without whom there would be no Orkneycommunities.co.uk.

Winners are encouraged to use this logo on their site, and link back to this page from it. 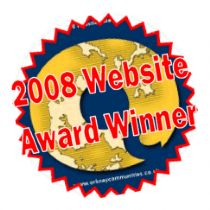