Yesterday nine of us met at the Lochside in Holm despite the leader Trevor being laid up. Get well soon Trevor !

In his absence, we walked up to the Point but no further as it was windy but dry. On the loch were the usual Widgeon, Golden Eye, Long Tailed and Tufted ducks. However, a couple of Goosander were prominent. On the shore were Turnstones, Ring Plover and a distant Great Northern Diver.

We then went to the Lambsholm Quarry to look for the Blue Rock Thrush. We were unsuccessful on our short visit and it turned out it had not been see since Monday.

Finally we looked in at the 4th Barrier but no new species were seen. Our recorder Sally noted 31 different species. Then we were off to Robertson's for a warming soup and coffee. While there, a list of dates were passed around ready for next year's meetings.

Sally and Liz are looking for people who were not there yesterday to come forward and volunteer to lead the group on the blank dates. This is not arduous and is well within the capabilities of everyone in the group. 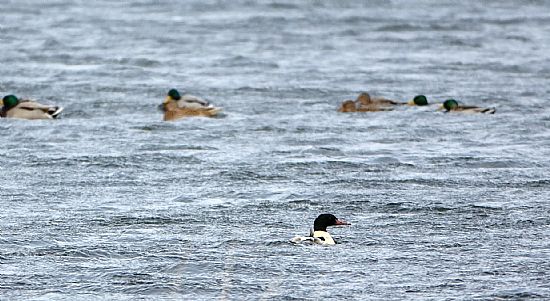