Skip to Main Content
Login
YoutubeTwitterFacebook
Ahead of the Scotland / England game...Scotland and Slovakia: A valid comparison?Signs and portentsReasons for Yes - Angus Fraser1979 revisited - Devolution is Dangerous!Index

Time to tidy the house 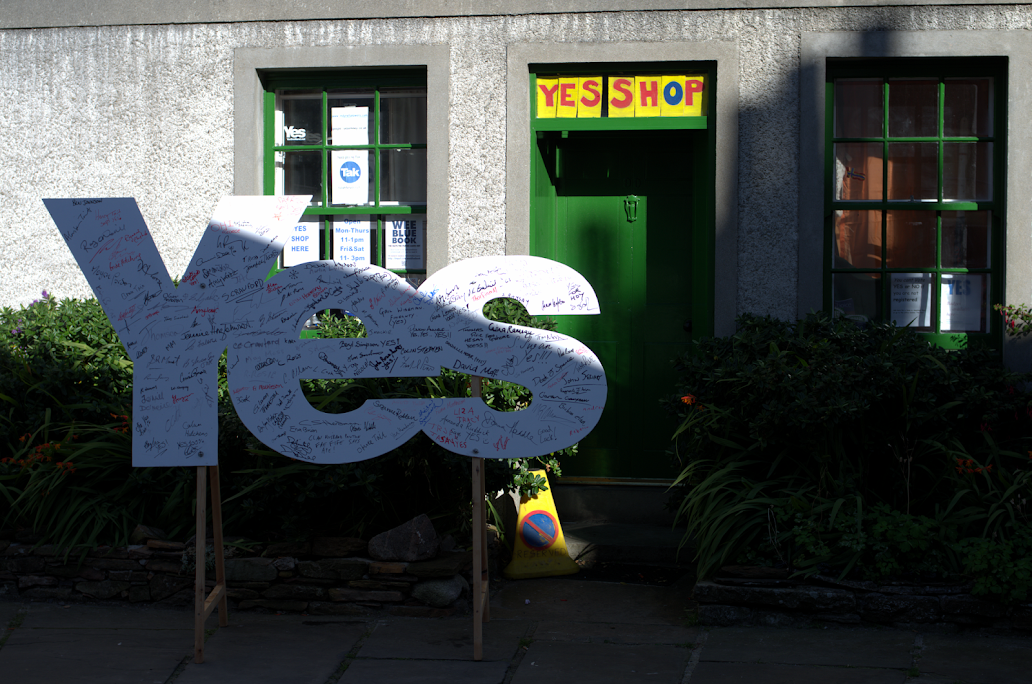 Now it’s my turn for a cathartic greet on the aftermath of the 19th. Sitting in my untidy house with weeks’ worth of piles of unsorted washing, the remains of campaign debris everywhere in what was a sitting room that became a yes shop for a few weeks and where tourists and locals trooped in daily for leaflets badges tea and wee blue books, there is a calm that is strangely empty. The frenzy at the computer, daily firing off the frenetic tweets before going to the ‘other’ job, posting face book shares, scanning late- night press releases or driving the 30 mile round trip to a yes meeting has all gone. We knew the energy burst would be intense and have an endpoint. We are all reeling down in various forms of collapse out of the spin.

I wont go through the litany of it all it because it can all, and will all, be summed up in the coming days week and years in the most unsatisfactory but ultimate truth you get – I told you so... The trouble is much as you want to say it – and those of you that have had teenagers you will know, and those of you that have had it said to you as teenagers will know, it is the most counter-productive comment you can make. It burns on the tip of the tongue like no other retort because it is indeed so – it confirms that the teller was wiser and their wisdom has been borne out. But here is the secret – it is the one thing we will never need to say because the power of others realising it for themselves is much the stronger course of learning. As the realisation dawns, they will more than anyone could every say, know themselves that those who told them so were right. And then they will quietly shift. To realise one’s own stupidity is never a grand moment.

There will be many who voted no, even today, as they see the unravelling of the ‘vow’ that led them into the trap, begin to feel cheated and a sinking feeling begin to take hold that they might have been wrong. They need a route without ridicule towards the body of us who learned all these things many years ago in other political struggles. That they did not have access to that knowledge is not their fault. We, who have been here before know where that misplaced trust was engendered. There will be those of course who will never let a chink of doubt into their certainty and who will continue to mock and taunt us impatiently demanding we get over our ‘silly’ ideas.

For every personal and public defeat we have ever suffered we all have to swallow the ugliness that the hurt manufactures. For those of us whose politics is personal and have lived the lives of the marginalised, the ridiculed, the disenfranchised and the abused and ultimately emerged as survivors, the struggle goes on. When we get comfy with our lot it is not a ‘get out’ for pulling up the drawbridge on the poor across the road or down the generations and substituting social justice with arms length conscience salving. The wealthy societal escapees seem to have done that.

In Orkney the electorate returned a thumping No. All along we knew this would happen and braced ourselves only for the size of the shame. We all threw everything we had at the campaign, knowing that with social media and every vote counting there could also be a butterfly effect from Orkney - each illuminated mind had the potential to open up another host of possibilities among friends and family far and wide. Our campaign was never just about being local to here – we had to make the establishment uneasy, the comfy Lib Dem establishment of landed gentry and pony club mums, and we did. The yes campaign improved the independence vote in Orkney by 6% from the devolution referendum figure. We can hold to that small success.

Orkney’s middle class are well cushioned and have optimum care and social protection, while Orkney’ poor are isolated by transport remoteness and lack of connection to the poverty discourses in cities.

It is clear that the legacy of middle class greed that the post Thatcher generation embraced has enabled those whose entitlement, which is sometimes distastefully smug, to steal the future from this next generation of young people. Those who had it all voted on their bank balances and not for collective aspiration.

The Lib Dem support in Orkney is unquestioning. The faithful troop religiously behind the inflated Lib Dem party personalities, basking often in the reflected glory of an MP in the Tory Cabinet or the crumbling legacy of those who take lordships and OBEs. The Liberals plan their party’s succession well ahead from this unquestioning safe seat. Let’s see if our high ranking cabinet member MP manages to hold his coalition friends to any of their grand promises to either these isles or Scotland.

There are well meaning but frustrated local authority councillors who get routinely burnt out with the impossible impotence of the political structure of the unitary authority. The idealistic and conscience-driven are a rare thing when our political choice as voters is often pared down to a beauty contest among local predominantly male ‘personalities’. The revolving door of former officers becoming councillors is something I am not comfortable with.

For me, as I canvassed and campaigned and spoke at meetings, the first task was to gauge the baseline knowledge of the audience. This could be very low. More people now know how ‘stuff’ works, and crucially more people are now confident to question, discuss and argue. Talking about politics, so long a frowned upon pursuit in Orkney is a taboo that is gone. As far as knowledge of the chess game of politics goes, it is complex and dynamic and the historical patterns and lessons should be learnt. The media would have many believe it is black and white and reduced to personalities. But you cannot blame lack of political awareness on the people, so who is trusted to educate them I wonder?

We welcome to our group those who share the democratic aims that are the vehicle for social and economic fairness. We need those whose thinking has shifted since the no vote of the 18th to help us anew and must not cast up the past. The ‘45%’ who got their political education in this campaign are an irreversible force who demographics will favour the future. So it is not done and Orkney’s 33% of Yesses may symbolise the speed of a LP vinyl disc but it's still progress, even at the pace of the slower revolution.

Comment from Fred Pirie at 01:11 on 13 October 2014.
cut to the facts, 83+% voted,a very high turn out in the whole of Scotland WHOEVER VOTED WHICH WAY, what is important they all voted. Now 55 thought no, 45 thought yes, in my mind is the glass half full of half empty,??
Comment from Jennifer Blair at 11:10 on 13 October 2014.
I have only been in Orkney for a year but I like you believe that we deserve better than we have now x x yes
Comment from Michael grieve at 20:38 on 13 October 2014.
Brilliant !!! It's people like yourself that showed Scotland and all the islands that change is good change is needed . The yes campaign brought back a great community spirit and a great deal of creativity . To think you opened up your home to become a yes shop says it all . And I also love how folks have signed your yes sign . Hopefully we all see the day Scotland is free , keep up the great work and a big thank you from your friends in fife . Alba gu Brath .
Comment from Deirdre Smyth at 21:37 on 13 October 2014.
Brilliant and well done. You have, and are, doing an amazing job. Keep on we need people like you.
Comment from Sydney Bangham at 00:23 on 14 October 2014.
It is quite obvious from your comments that you have put your heart and soul into the Referendum campaign and I can understand your disappointment. But look at the press and realise how many of them are now saying that it's no longer a question of if for Independence. It's a question of when. Keep the enthusiasm going. Maybe a night out to the pub once a month, or maybe every 2 months. Keep people interested and do welcome into the group anyone who voted "No" and has changed their mind. A little bit of understanding rather than scorn goes a long way. I wish you good luck and hope you won't give up yet.
Comment from Mike Parkins at 00:49 on 14 October 2014.
Please accept the democratic vote and let's work TOGETHER to make Scotland a better place. Please stop trying to tell NO voters that they were wrong - we voted with conviction and how we felt.
Comment from katy hodgson at 23:39 on 14 October 2014.
i watched it all unfold from aotearoa new zealand. i can only encourage you to stick to the programme. because westmonster isn't scotland, you are. and there is no "together".
Comment from Andrew Leslie at 00:52 on 15 October 2014.
I came to Orkney for a holiday 2 weeks after indyref. There were still Yes signs in the windows. You haven't lost. You just haven't won yet. Stay strong.
Comment from Jayne Calderwood at 23:22 on 20 October 2014.
We came to your Yes shop/home during our silver anniversary trip to Orkney just before the vote and were so impressed with the hard work of the yes campaigners.
1.6 million of us voted yes and many of those are now politicised and inspired to be part of the political process.It wont take much of a shift especially viewing the UKIP/Tory charade that is being played out down south.Our time will come.