In Orkney we are understandably very fond of plants that are hardy and grow quickly. However, that means that we occasionally introduce a plant which turns out to be a real menace. Further south, the invasion of rhododendrons and their destructive effects on woodland habitats is well known. In Orkney, we have salmonberry ... 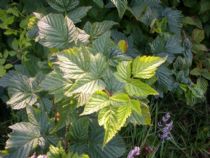 Salmonberry was probably brought into Orkney as good game cover and planted in woods around some of the large country houses. In many of these places it seemed to co-exist happily with other trees and shrubs for many, many years (and still seems to in a few places). In recent years, however, it has transformed into a bit of a monster. It has rampaged, for instance, through every bit of Trumland woods on Rousay, smothering all groundflora and young trees in its path and leaving the current owners with a serious problem. It has spread throughout a native willow carr along the Old Finstown Road, becoming so intimately entangled with the willow, that it is now hard to think of any way of removing it; it is quite possible that it will eventually smother out the willow. It has been spotted amidst other areas of willow carr too. It has found its way into sensitive habitats, like in Russadale where it threatens to spread through native vegetation. More and more patches seem to be appearing by roadsides, in woods, in ditches, in gardens and out in the wilder parts of our countryside.

The march of salmonberry shows the risk we take every time we import an alien plant (and  of course we all love to extend the range of plants we can grow in our gardens). In its natural habitat, in North America, salmonberry seems to live in equilibrium with other plants; it is grazed by bear and moose (and even eaten by native Americans as an indigestion cure!). Even in other parts of Britain, it seems to have caused few problems, but clearly there is something about Orkney (and apparently Caithness) that it likes. It is fruiting well and therefore will be spread more and more by birds who will carry the seed to new parts of the County.

Anyone who has planted salmonberry in their gardens will also know that it has extremely pretty, bright rose-coloured flowers in early spring - it may be a monster, but its delicate flowers are exquisite. It forms good thickets, in which birds can nest. They will also know how it spreads by a tough network of underground roots and how it needs to be cut back to keep it ‘in its place’. If they have ever tried to remove it, they will also know that it is an almost impossible job.

The lesson to be learned from this, is to to keep any potentially invasive plant firmly under control, preferably safely within our gardens where we can keep a firm eye on it. Unfortunately the salmonberry ‘cat’ has already been let out of the bag in Orkney and all we can do now is to try and spot its appearance in new places before it has had time to take a hold and spread. 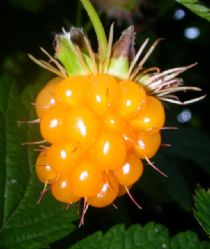 If you have salmonberry on your land please try and control it and at the very least, cut it back before it sets seed; at least then you will prevent the seeds being carried by birds to a new location. If you notice any new patches, especially spreading into any natural habitats or woodlands, please let Jenny Taylor know. If anyone has a problem with the plant on their land, or would like to become part of a salmonberry ‘hit squad’, then please also get in touch, as we hope to carry out some experiments to trial different methods of eradicating it. A leaflet about salmonberry is also available from the Orkney Woodland Project.