Nine members of the Botany group met up at the road end inland from the Covenanters’ Memorial in Deerness at 2pm on 4th June. After the recent unsettled weather it was great to have a lovely afternoon, with a slight wind, but not a cold one. It was also delightfully clear so, while not scrutinising the ground for interesting plants, we were able to look north and east and identify many of the north isles, from Rousay in the distance to the north-west round to Auskerry much closer by to the east, its lighthouse shining in the sun.

Much was beginning to flower, so it took us some time to break free of the car park and walk along the grassy path down to the memorial. A number of species also needed to be identified from their leaves as they were not yet blooming: meadow vetchling for instance was in leaf but not in flower. Striking were brilliant yellow patches of tormentil and the intense deep red of many of the stands of campion by the path. Diverging from plants for a moment, a broken eggshell  led to some discussion, but a curlew chick was eventually decided upon as its former occupant. Then a small umbellifer caused further discussion, but was later decided to be pignut.

Once at the memorial we looked down the slope above the sea, part of which was covered with primroses, with fine mats of thrift among the rocks lower down. A pond in a hollow down towards the sea was spotted as having a water plant with small white flowers growing in it. Trevor nobly climbed down to retrieve some, which turned out to be a water crowfoot, probably Ranunculus aquatilis. By the fence round the memorial was a stand of delicate blue spring squill, with a small patch of mutant white-flowered plants of the same species beside it.

After some time at the memorial, admiring the view and the flowers and, for the more philosophically minded, reflecting on man’s inhumanity to man (and in this case women and children too), it was time to repair to the cars and make our way home. All in all it had been a very good afternoon. 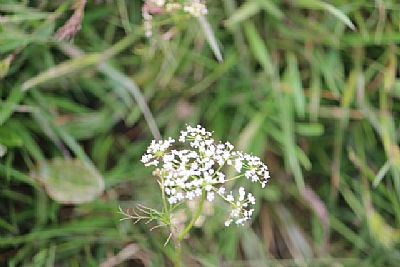 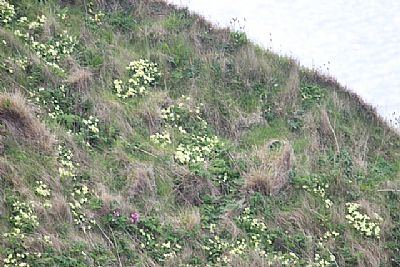 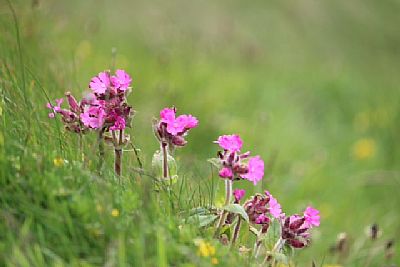 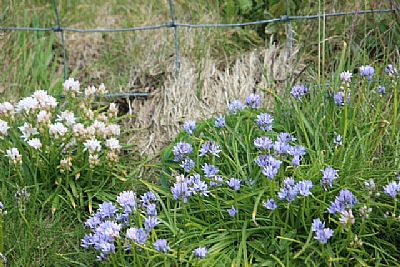 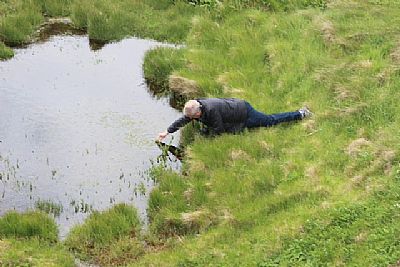 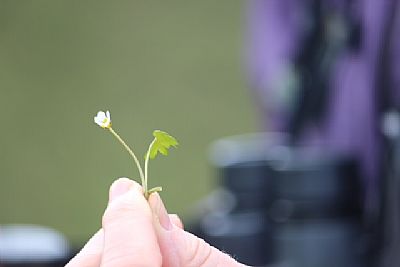