Nine folk met at the 4th barrier in good weather. We watched little terns fishing on the Scapa Flow side, with a raft of eider, including males in eclipse plumage, in the distance. On the beach, 2 fulmar were sitting tight on the grassy cliff. Along the beach 42 little terns were gathered together - a wonderful sight, with still some in the air. These later took flight, some landing on other sandbanks. Quite a proportion of these were chicks, but none of us confident to say how many. Ringed plover, including young were running around.

We also saw pied wagtail, oystercatchers - one with a damaged leg, arctic tern and meadow pippits in the dunes. A camper showed us photos of eggs - saying that "2 nests were seen by the roped area, one with 2 eggs and one with 1 egg". We couldn't spot these.

At Honeysgeo we watched sand martins flying in and out of their nest holes. Below Limbo - a previous site for breeding Arctic and little terns - nothing was there, except 2 arctic terns in the distance, disturbed by a dog. Around Honeysgeo farm were swallows and house martins. Flowering oysterplant was an attraction on this beach.

A walk past "The Head" revealed a few more fulmars - one chick seen, shag, eider and, in a nearby field and flying, approximately 100 lapwing.

There was also a common seal with her pup at Honeysgeo.

(Tim, Liz and Sally drove down to Banks, South Ronaldsay to check out the cargo ship aground on the Pentland Skerries which we had spotted from above the wreck of the 'Irene'. While there it seemed a shame not to stop for some lunch! The ship remained stuck fast when we left as they were still waiting for the full tide to pull her off). 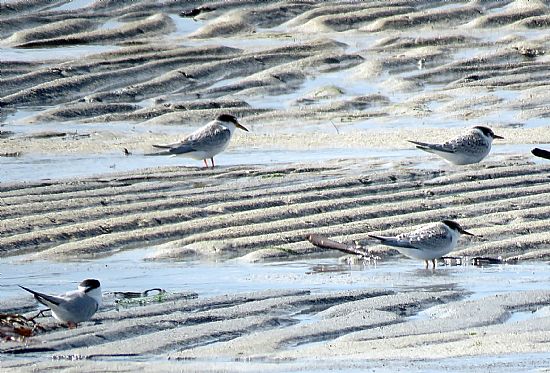 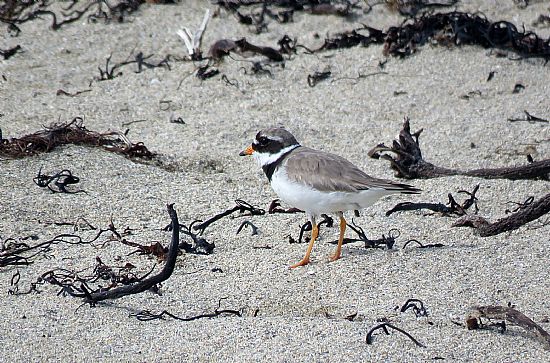