We had 12 walkers on our group today, 10 regular members and 2 very welcome guests. After 3 weeks of very sunny weather and light winds, it was inevitable that when the time came for our June walk, the wind would increase and there would not be blue skies.

3 cars were left in Limbo. Sharp eyes spotted an Arctic tern, Sandmartins, an Oystercatcher and a family of Greylags on the water before we had taken two steps from the cars. Jack saw Swifts on the shore and a Meadow Pipit bobbed along on the field to our right. We walked up the track towards “The Head” which this week houses important antipodean migrants and saw Lapwing and Curlew on the skyline.

We paused overlooking the wreck of the “Irene” and looked down to see numerous Eider on the rocks and in the water. Swallows swooped in over the cliff edge very close to us. Also on the water we saw Tysties and a bird which was thought to be some sort of unnamed diver (or an eider in eclipse plumage).A solitary Razorbill was also seen. As we continued our walk with sea and cliff to our right and hill and moor to our left we came across agitated Curlews, Lapwings and Oystercatchers who obviously had nests to guard and 2 Bonxies  who had a fly past us but did not attack so were probably not on guard. They did show off a few of their aerobatic skills. Rock pipits to the right of us, Meadow Pipits to the left.

On the rocky promontory, we were delighted to see a Great Black Backed Gull and its young. Nearby and further on we saw many Fulmars nesting and as we walked on we saw a good few Kittiwakes fly by but saw no sign of their nests. At the Herring Gull colony we managed to spot some chicks as they hurried to find a hiding place after being alerted by the alarm calls of their parents. Beyond the Herring Gulls as we moved on Great Black Backed Gulls stood in pairs but we did not see any more young. Out to sea groups of auks flew past both Guillemots and Razorbills. Up on the moor we spied a Snipe, some Ringed plover and a Wheatear.

A female Eider and 2 ducklings amazed us with their tenacity (or foolhardiness) in trying to make progress in the water in the strong wind and heavy waves; at times they were all washed along by the waves and one of the youngsters went head over heels in the water. It was like white water rafting with no raft. A bit further on Greylags and their goslings went into the foaming surf. Down on the beach we saw 2 Eider and their young in the calmer water. A single Ringed Plover on the seaweed flew off as we approached and over on the rocks a single young seal waved its flipper at us.

A short trip to the South end of the 4th barrier revealed one Little Tern away in the distance and a brave Skylark ascended its staircase of sound to bid us farewell from the Faroese Telephone Exchange. It was a very pleasant way to spend a couple of hours in the copious fresh air.

SOME IMAGES PROVIDED BY TOM & TIM 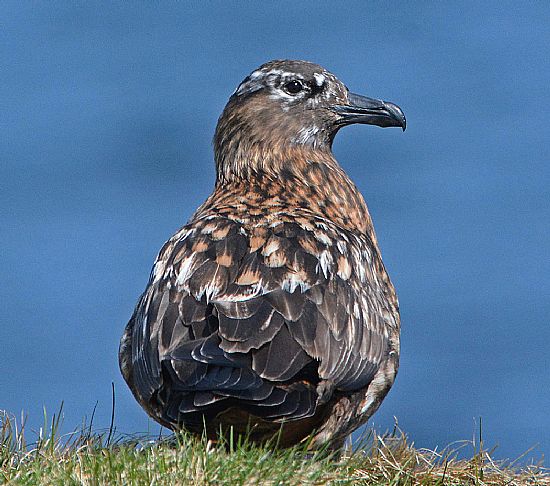 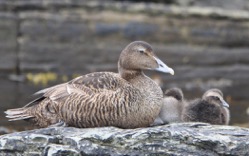 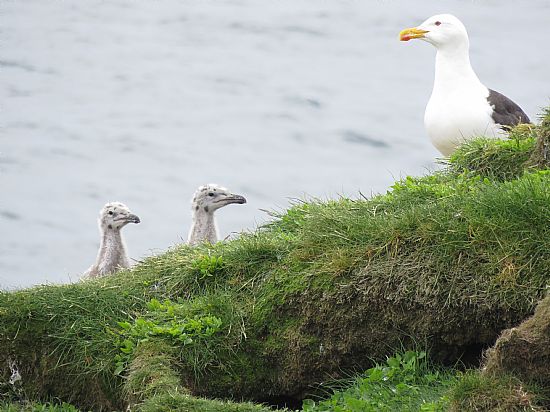 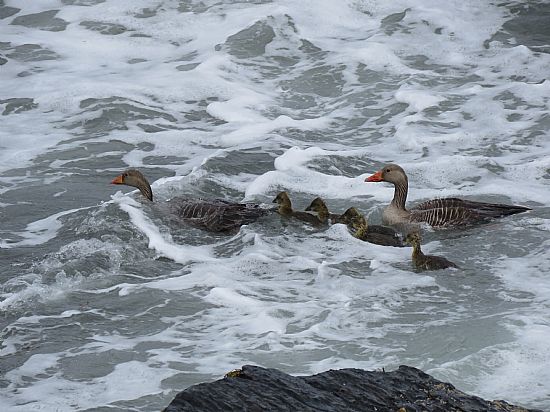