Twelve members of the Archaeology and Photography Groups went over to Caithness on Wednesday 7 June to see a few of the sights and the sites.  We managed to pick the day when Providence decided we should pay for the fine weather all of Orkney enjoyed earlier in the year.  The start of the day was pretty nasty with a strong stinging easterly bringing cold rain in along the cliff tops south of Wick.  It did get better so most of us were able to dry out slightly by the time we got the boat home.  Some brave souls, better known as the gluttons for punishment, did go out at the last place we visited when the weather relapsed.

The plan was to get to some of the prehistoric and mediaeval sites along (or close to) the A9.  These were

The Castle of Old Wick
The Grey Cairns of Camster
Laidhay croft museum
The Hill of Many Stanes at Mid Clyth
Girnigoe and Sinclair Castles.

Despite the conditions we managed the lot as well as the Wick Heritage Centre.

After the first attempt at the Castle of Old Wick where we successfully reached the castle, inspected the interior and defences and got back to the bus, there was a consensus decision to head for Laidhay and primarily the tea rooms.  These are a find – very welcoming and helpful.  They supplied copious coffee and tea to revive us and then we went for the soups, sandwiches and home bakes all delicious.  Anyone heading north or south on the A9 and needing refreshment could do a lot worse than the tearooms at Laidhay.  An added recommendation is that the CD of Arthur Pottinger (Mr Bunty) is prominently displayed.

After a quick look round the museum, we headed for the Camster cairns which are well worth going to see.  There are 2 main cairns – one round and one long and those who are both intrepid and fit can crawl into the tomb chambers.  There was a quick prior diversion down to the Harbour at Lybster.  From Camster we took in the enigmatic and unexplained hill of Many Stanes at Mid Clyth.  This is a set of between 18 and 23 stone rows extending down the hillside.  The stones are small – mostly about 0.6m and relatively evenly placed.  The site has not been excavated or cleared so there is as yet no obvious explanation for the monument which most closely resembles the stone rows in Brittany although there the stones are much larger – the same size as the individual standing stones in Orkney.  The only place in the British Isles with anything closely resembling the Hill of Many Stanes is Dartmoor.

Having some time in hand we went on to the Heritage Centre in Wick.  This is an imaginative and well presented exhibition of Wick’s past.  There is a great deal to see and think about and it is well worth the visit.

Our final visit was to castles Girnigoe and Sinclair to the north of Wick.  The weather had turned again to be cold, wet and windy so a few decided to postpone the castles for another better day.

It is a pity that the weather was not good but it did not spoil what I think and hope was an enjoyable and interesting day south. 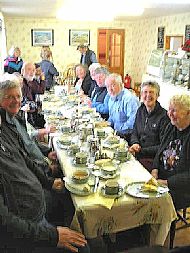 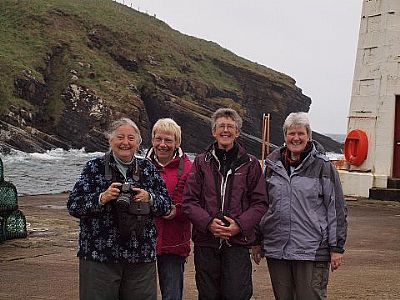