Outing to Hoy 16th May

Nine of the birdie group did a walk in Hoy mainly up at the 1200 to 1500 feet level above Trowie Glen, to view red throated divers, we did see 5 and that was it. Other birds the Bonsies but not in their numbers that used to be. One golden Plover and then when got back to Moannese saw a great northern diver. So not a lot for the days outing but the company and chat kept all going through the difficult sections. 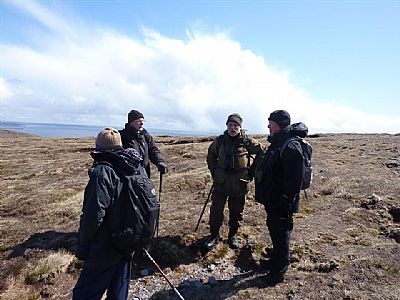 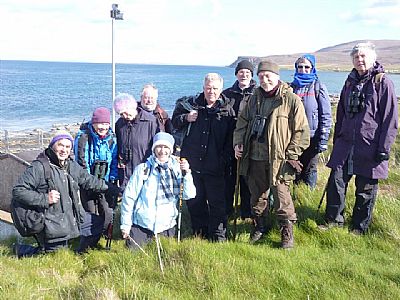 Comment from Ken O'Connor at 16:11 on 20 June 2012.
On the 20th June the' Birdie Group' enjoyed a lovely walk in glorious sunshine. Starting off from the Viking Centre in Orphir, with our leader Allan, we set off along the coastal path of Scapa Flow . The first birds to be seen were a pair of sand martins which are gradually increasing in population about Orkney. Next we saw a red throated diver, not far out in Scapa Flow, and then on to a raven's nest where the young had already flown, but it was very evident that there had been young hatched out this year. We ambled along the shore seeing all the usual birds and then at the Bu loch we stopped to view the Terns, Dunlin and Coot, also a pair of Arctic Skua who were watching to see if they could grab any of the food that the terns were bringing home.
We had a tea break at Swanbister Pier before working our way back, via the small wood at Ghia where we saw a family of wrens, and then on back to the cars, ready for a rest!
The next walk will be the 18th July around Hunda led by Barbara and Peter.
Ken