A Walk in Rendall 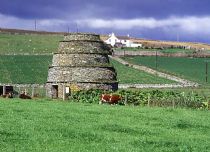 This is a walk that was enjoyed recently by Orkney Ramblers as part of our summer evening programme.  Five and a half miles in length the route takes in quiet country lanes, coastal tracks (part of the Core Path Network) and one of the key sites in Rendall – the Doocot.

Starting at Rendall Cemetery on the Gorseness Road (G.R.HY409194) proceed eastwards up the hill leaving the cemetery on your left. The road levels out to give a grand view across Wide Firth Bay to Shapinsay. Take the first turn right and head downhill towards the coast. Go straight ahead at the crossroads you come to and you will find yourself at the Bay of Hinderayre.

Time to leave the tarmac for a while and pick up a grassy track to your left that follows around the coast. Just at the northern end of the Bay you will see an ancient churchyard and church remains.  Note the extensive lichen on the walls and tombstones which, I believe, is a sign of clean, unpolluted air.


The track is clear and signposted all the way to the Doocot. Take time to enjoy the 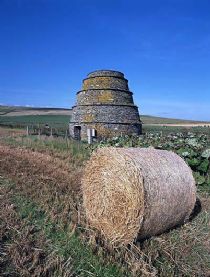 views across Wide Firth as Gairsay comes into focus. Do have a look at the l6th century Doocot that is part of the Hall of Rendall. It is unique in Orkney and is a wonderfully shaped structure.  There is an information board which tells you all about it. Just off shore by the Hall is the Holm of Rendall and Seal Skerry and on the evening we were there, there were some seals just out in the bay, calling to each other and, I am sure, watching us!

Retrace your steps back to a waymarked T-junction and turn right. Still on a grassy track, this takes you uphill and skirts around the grounds of North Attit to bring you out on to the road. Turn left and follow the road back to the crossroads you approached earlier from the right. A little further straight ahead, on the left take advantage of another newly created signed footpath that takes you down a field edge (enjoy the profusion of wildflowers) and around the coast just above the shore. You will come out by Puldrite Bay onto the Puldrite Road. Turn left as it skirts the Bay and passes farm buildings, self-catering cottages and a number of other properties.

The road turns sharp right and takes you alongside the , where there is another haul-out popular with the local seal population. 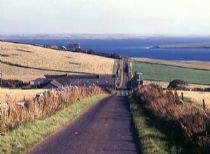 Continue on to a T-junction and turn right again onto the Gorseness Road, up the hill and back to the cemetery. The views change as you turn corners and there is Kirkwall across the water and then Wideford Hill, Keelylang, Finstown and in a gap in the hills the ever-present sight of Ward Hill on Hoy (on a clear day that is!).

Submitted by Brenda Blunn (Chair of Orkney Ramblers and leader of this walk), with photographs  by Doug Houghton.