A Walk at Waulkmill Bay and the RSPB’s Hobbister Reserve

This walk is mainly on land owned by Highland Park Distillery but leased by RSPB Scotland as the reserve known as Hobbister.


Follow the track that heads south towards Scapa Flow.  On your left is an area of native willow scrub that has been fenced to prevent any possible damage from grazing sheep, the grazing rights to this area still being held by Hobbister Farm.  This is one of the best developed areas of regenerating willow scrub anywhere in Orkney and is home to breeding birds such as Stonechats, Sedge Warblers and Reed Buntings as well as the commoner Wrens.

After about 400 metres the track divides, with the eastern fork heading towards Highland Park’s peat extraction area.  Take the western fork (to the right) and follow the RSPB trail that takes you towards the cliff edge.  In summer, Fulmars (Mallies) can be found nesting on these cliffs while Black Guillemots (Tysties) can be seen just offshore together with Shags and Eider Ducks.  In winter, Great Northern Divers can usually be seen a little further out.

The track diverts away from the coast to avoid the dwelling called Crook and passes the large, slatted wooden building that acts as HP’s peat store.  You are now looking into Waulkmill Bay, one of Orkney’s iconic beauty spots.  At low tide the bay is a great expanse of shimmering sand where, at the lowest of ebbs, locals can be seen walking backwards armed with long-bladed knives!  Why? – to capture spoots of course!  At high tide, in winter, the bay holds some excellent birds such as Slavonian Grebes while the calls of Long-tailed Ducks (Calloos) echo across the bay. 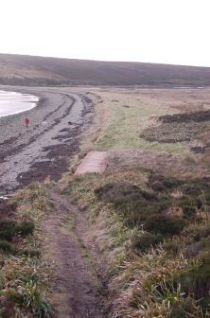 Continue along the road, past the public loo and a set of steps that lead down to the bay, as far as where the road bends to the north towards the main road. At this corner, a track leads down to the north-east corner of the bay through another lovely area of willow scrub.  A closer look at the vegetated cliffs will reveal other tree species such as Aspen, part of Orkney’s original woodland cover and only hanging on here where grazing animals haven’t been able to gain access.

The track continues as a barely visible path through the grass along the back of the beach with, on your right, one of Orkney’s most extensive saltmarshes, Skaith, where can be found some scarce (though not very conspicuous!) plants such as Long-bracted Sedge and Narrow Blymus.  Eventually one is halted by the Mill Burn which has exited the Kirbister Loch about a kilometre to the north and at this point you are standing on a mysterious archaeological site!