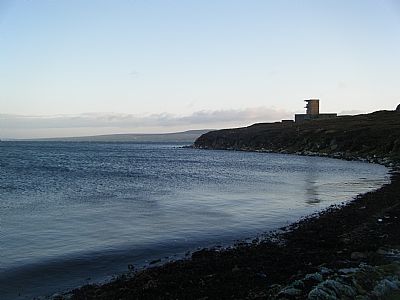 This is a pleasant way-marked path through the heather to the WWII Scad Head Coast Battery overlooking the Bring Deeps in Scapa Flow.

From Moaness pier head south for 3.5 miles, OR from Lyness head north for 6.5 miles, to the signposted viewpoint at Lyrawa

It is a rough track but you can take a car up to the viewpoint for panoramic views of Scapa Flow.  From here, to the North, follow the way-marked path that drops below the remains of a gun emplacement, down to the Observation Post at Scad Head, which you can see in the distance. After a while the path joins the old railway track and here you turn right and follow it all the way to the coast.  There was no access by road to this battery so a 900 yard, 2 feet gauge incline railway was built from the main road down to a group of sidings near the battery observation post. This operated like a tramway, and the winding gear and wheels can still be seen near the road.  Steel wagons ran on the railway, and their remains can be seen at the base of the cliff at Scad Head.

As you drop down to the bay of Chalmers Hope you will see the remains of the camp overlooking the bay. In November, Grey seals, with their fluffy white pups breed here. Round the bay to your left is the site of the original 12-pounder gun emplacement, and if you go down to the shore you will come across the remains of the railway wagon as you make your way along to the Observation Tower.

Here you have the remains of gun emplacements, searchlights and engine room, all placed to cover the boom defences, the remains of which can be seen on the shore to the east of the searchlight emplacements.  In 1939, an anti-submarine and anti-surface ship defence boom was installed between Houton Head and Scad Head across the Bring Deeps, to defend the western entrance to Scapa Flow. The boom consisted of a system of robust floats and a heavy chain across the surface, from which anti-submarine netting was suspended. (You can see a sample of this at the entrance to Scapa Flow Visitor Centre).

Once you have explored Scad Head you return up the railway track to the main road and turn left. On your right is the small lochan, the Water of Hoy. Look out for Red Throated divers as they usually make their nests here each summer. Rather than turn up the track to your starting point, carry on along the road and pay a visit to Betty Corrigall’s lonely grave over in the heather to your right, just beyond the end of the lochan.