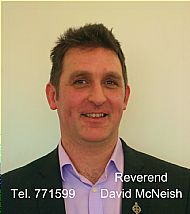 This is David's first charge, having completed his training in Edinburgh's Liberton Kirk.  Before training for ministry, David worked as a parliamentary campaigner for Citizens Advice Scotland, a worship musician and a hospital doctor.  He is a member of the Iona Community and particularly passionate about writing songs for children that adults can learn from.

It was whilst on a placement in Rousay in 2012 that David and his family first began to consider a calling to Orkney.  There were no cows in Cumbernauld where he grew up, though there were a few by the fire station in Milngavie when he moved there.  South Queensferry, where the McNeish family lived for the last ten years is also not known for its cows.  David therefore brings a lot of life experience to the role, but little experience of calving, silage or how best to open a car door in a strong wind.

Despite this they have been warmly welcomed to the West Mainland, as summed up nicely in Harvey Johnston's poem.  David's leadership has been described as "gentle but effective" and a good insight into it can be gained from the dialogue sermon written by Michael Paterson for his first week in ministry.

The postal address is :

If you're still reading have a look at this.