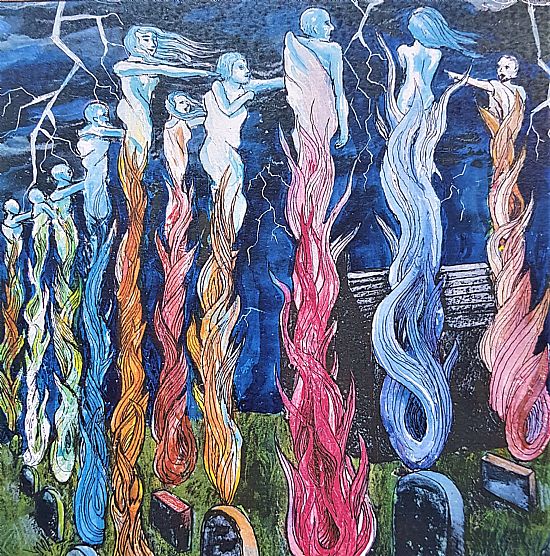 Our current exhibition at For Arts Sake features the illustrations of the newly released Orcadian Sketchbook. Eddie Sinclair has translated the many tales of Walter Traill Dennison in order to make them more accessible to a modern audience. His endeavours have definitely been aided by the drawings contributed by his granddaughter, Cassie Sinclair.

A number of Orcadians will likely know the tale of Assipattle and the Stoor Worm from having performed it as a class at an assembly in primary school, it’s easily Orkney’s most renowned folk tale. However, how many Orcadians could tell the tale of Why Balfour’s Geo Got Its Name or for that matter know what a ‘lavro’ is and why someone would swear on the lips of one? Dennison’s original text was published in 1880 and many a modern reader would sadly have trouble with the original Orcadian dialect. The first part of the Sinclairs’ book presents the original text so purists need not weep, black and white drawings by Cassie accompany this section of the book and may help give the gist of the story; the tale of The Stown Windin’ Sheet has a watercolour of a bleak graveyard, very much setting the scene and tone of the piece.

At the back of the book, Eddie Sinclair has translated some of the texts into English and Cassie’s illustrations become colourful. The drama of The Stolen Winding Sheet has unfolded, frightening spirits of many different hues erupt and swirl from the graveside to terrorise the main character of the story. Cassie has used many different materials throughout the book, using whatever is best in order to tell the story, be it acrylic or simply a biro. Her style which is usually illustrative and lively lends itself well to stories, selkies have a glint in their eye and the people of the piece are rendered somewhat comical in their portrayal. For the front cover of the book, she has painted an artistic interpretation of the view from Dennison’s farm in Sanday at the time of his writing; both Sinclairs have done everything possible in order to show the utmost respect to the author and keep his stories alive.

We have a number of prints and books for sale in our gallery, you can also see the original sketches made for the book. The exhibition ends on November 9th, the gallery is open Monday-Friday, 10-5 and Saturdays 10-4.

Please note that whenever you submit something which may be publicly shown on a website you should take care not to make any statements which could be considered defamatory to any person or organisation.