While OHS and most of those present at the meeting welcomed the growth and success of Orkney’s renewables industry, the general feeling was clear; that the planned extension of transmission capacity showed a wilful disregard for the landscape in which the people of Orkney live.  The overriding concern of the developers has been to keep costs to an absolute minimum regardless of visual impact on the environment.  In addition the verdict on the level and quality of consultation by SSEN was  damning -  minimal information, misleading graphical representations of visual impact of the proposals, and virtually no real consultation.  “Unfortunately SSEN are here to sell, not to listen” said Mr Kermode.  “The possibility of undergrounding the new cables instead of the unsightly ‘Trident’ poles was not included in the consultation exercise, and details of the results of the consultations have been withheld.  In addition the plans have shown little respect for the landscape, and when questioned on technical detail, SSEN have adopted a ‘we know best’ attitude.”

Real concern was expressed at the proposed Trident poles - upwards of 700 very large double poles, standing 56 feet high and 100 yards apart, which will stand in addition to the existing distribution network.  To give some context,  Orkney’s existing Hydro poles are 39 feet in height (see illustration). 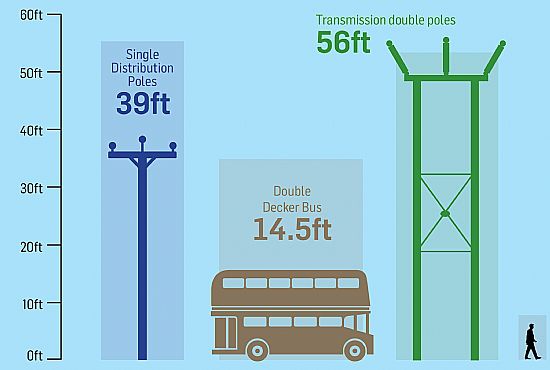 There is similar concern about the visual impact of the planned substation at Finstown.  This complex of twelve buildings will have a ridge height of about 45 feet and will sit to the west of Finstown above the Harray Road junction.  In addition there will be substations on South Ronaldsay and at Ellibister, each of which will have twice the footprint of the new McGregor Industrial Supplies building at Hatston, and a third higher.

It was learnt then that an option of an underwater cable across Scapa Flow had been dismissed at a very early stage, based on what appears to be incomplete evidence.
The overwhelming feeling of the meeting on Monday evening was that Orkney deserves much better, and that the options of undergrounding and submarining cables, and ‘burying’ substation buildings must be pursued vigorously with SSEN while also informing the Orkney public of the threats of existing plans.

Orkney Heritage Society would like to make the Orkney public aware of just how severe an impact on the Orkney landscape the proposed project will have, not just the visual impact of the proposed cables, poles and structures, but also on the natural environment. The public are encouraged to view the detail on the proposals and make their opinions known to SSEN via their website (www.ssen-transmission.co.uk/projects/orkney/), and to complete a poll set up by Orkney Heritage Society - for the poll click here.