Twelve of us met at Barnhouse village where Ranger Sandra Miller gave an excellent talk, bringing it to life, describing what it probably would have been like back then.

We were so lucky with the weather for the walk especially after all the rain and gales that we have had.

We spent time in the bird hide where there was good range of wildfowl and other birds.  We saw a total of 25 species.

We walked over the bridge and up to the Ring of Brodgar and learnt that the archaeologists have had an ‘update’,  now saying some of the stones were never erected, that the site is therefore still work in progress!

We walked around by the loch but no otters today. However, Tim has included a picture he took last week. It seems there were upwards of ten frolicking around.

We headed back to Judy’s for some welcome soup, bere bannocks and cheese, just what was needed after a cool morning walk.

Thanks to Sally for recording the species seen, which were: 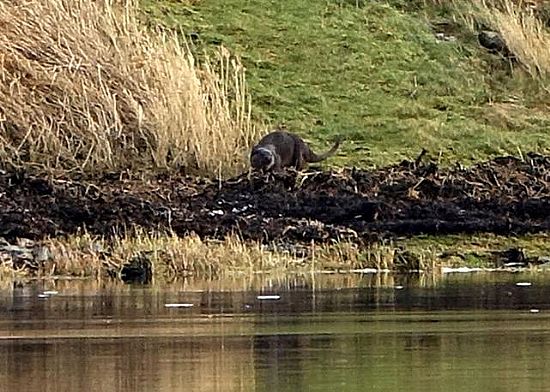 Please note that whenever you submit something which may be publicly shown on a website you should take care not to make any statements which could be considered defamatory to any person or organisation.
Back to Top
site map | cookie policy | privacy policy | accessibility statement