An early start for fourteen of the group with our trip on the ferry to Flotta. The day started with heavy drizzle and low visibility but cleared up in time for the walk.

We were met by some of the Flotta folk who had kindly agreed to transport us to Stanger Head for the start of our outing. Down the cliff face to see the puffins was the first stop, not many of those, they must have been out at sea feeding. We viewed the fulmars nesting in the cliff also some razorbills and cormorants trying their luck for a fish just off shore.

The group then followed the heritage cliff walk past the old wartime lookout and on to Kirk Bay and a look at the church and graveyard along with an oyster catcher's nest on the war memorial. We stopped at the old Manse for a quick refreshment in the garden where there were green finches and the usual sparrows, starlings and swallows all feeding their young. Some of the group decided that they would do the longer walk around the west side, while the remainder went up to the viewing point on the west hill where a red grouse was seen and skylarks so well worth a visit, before ending up at the community centre for a break and a look at the excellent mural on the wall..

Afterwards Ken transported the group to the airport to see if there were any terns in the old colony that used to be there but sadly not this time, but did manage to see some terns on the return ferry trip across Scapa Flow to Houton so all was not lost. There were some penguins on the road to the airport which remained very still as we passed by and the penny farthing bicycle looked forlorn with out its rider!

All the other prime bird species were seen such as the arctic skua, and great skua, oyster catchers and curlews both young and old, also, eider out in the sea so a really good day was enjoyed by all .

Many thanks to everyone including our Flotta friends who made the day such an enjoyable one for the group.

Ken as leader of the group. 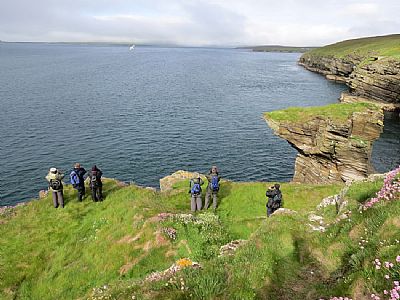 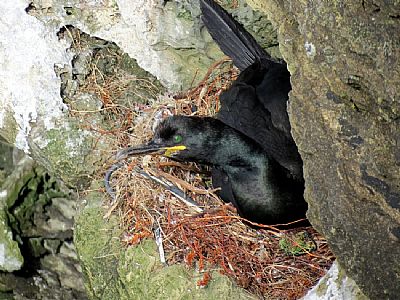 Shag (or Scarfie) on nest 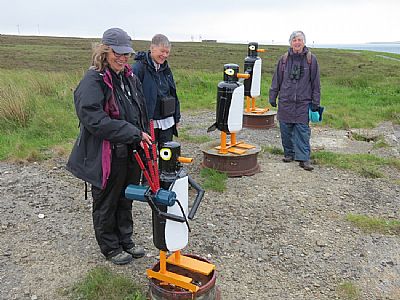