Westray Regatta 2007 turned out to be something of a disaster for most of the Stromness and Holm SC Snipes.  In the windy conditions there was carnage in the first race with Go Quickly Red capsizing after the first mark after completing a gybe (yes, it was not a beat to the first mark!) and then discovering that the mast was reformatted; Fiddlesticks retired with a buckled mast foot; Moonstone retired with some unspecified damage; and the deck of Njord, loaned to Richard Lambert for the event, parted company with the hull.

The winner of the first race was a visitor from South, Andrew Wibrow, sailing a borrowed boat from Holm SC, with Silver Fern (Davie Harcus/Alan Long) second, Wild Goose (Mark Taylor/Graeme Kennedy) third and Humdinger (Chris Moore/Barry Jones) fourth.  These were the only Snipe finishers of the race.  Congratulations to all.

The depleted Snipe fleet for the second race was further reduced by the withdrawal of the winner of the first race and the capsize of Silver Fern.  Wild Goose went on to cross the line in first place but was retired by her skipper because of an infringement for which he had not completed his penalty turns.  This left Humdinger the winner of the race.  Well done Chris and Barry for surviving the conditions.

By all accounts though, the Westray Regatta hospitality team provided good consolation for the mishaps on the water by putting on a splendid buffet.  Many thanks to the organisers and caterers.

Twenty five boats entered Stromness Regatta on a cold, wet, misty, Orkney summer's day.  With strong winds forecast, the Officer of the Day made the decision to keep the Yoles and Skiffs and the dinghies within the harbour area but allow the yachts to sail outside the harbour.  In the event, the strong winds did not arrive and the conditions provided some good sailing without the problems of capsize, except for the RS300. 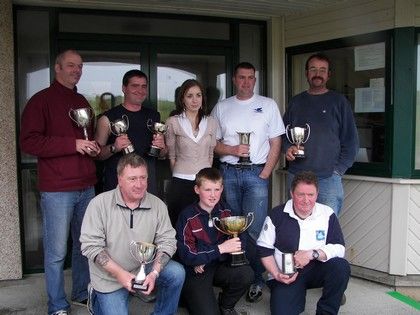 Events such as this can only survive as long as they receive support from the local sailing community and thanks go to all the competitors.  We hope you enjoyed your day and that you will return along with your friends next year.

Too many people are involved in the organisation and running of the Regatta to name them all individually but thanks go especially to those who:

The full results are set out below: 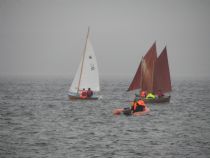 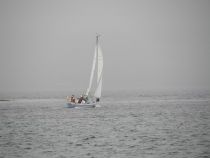 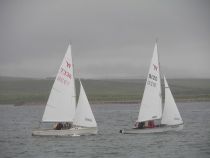 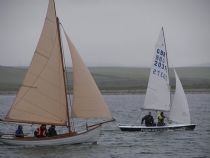 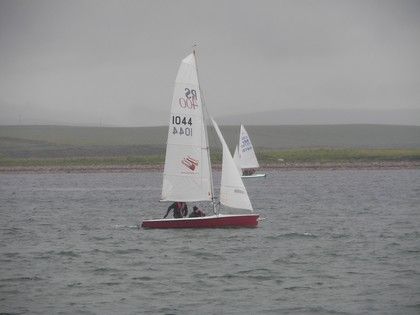 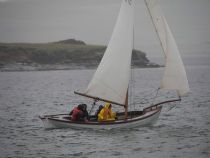 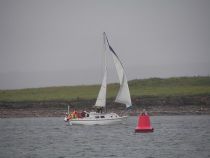 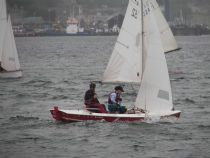 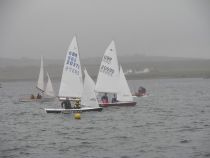 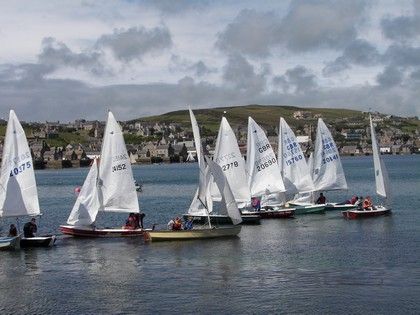 Twelve Orkney-based Snipes took part in a special race on Sunday, 15 July 2007 to mark the 75th anniversary of the introduction of the Snipe sailing dinghy.

In contrast with the Regatta day on the Saturday, the weather was fine and the race course involved a sail round buoys No. 1 and 4 within the harbour area - to give Stromness spectators a good view of the boats - and then further legs outside the harbour round buoys that had been dropped for the Regatta, before finishing through the line in the harbour. 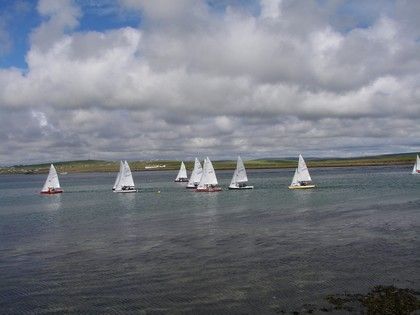 As the race started, Njord (Commodore Johnny Robertson/John Robertson) was to be seen some distance from the start line down by mark No. 7 and pointing in the wrong direction!  Rigging problems apparently.  Mmmm.  Mercury Too (Veteran Fred Johnston/Kenny Holland) was also lurking close to No. 7 - unusual for Fred who is normally in the thick of the action at the start of any race (and anywhere else too!).

Meanwhile Bonxie (Vice Commodore James Burgon/Mark Shiner) timed things perfectly - who was it who made the mistake of lending James a stopwatch?  - closely followed by the rest of the fleet. 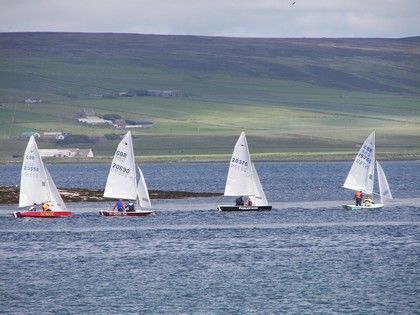 After rounding mark No.1, there was a long reach up to No. 4 close to the Northlink Ferry Terminal and by the time the mark was rounded Silver Fern (Davie Harcus/Fraser Corsie) had stolen the lead but, as usual, Fiddlesticks (Neil Foubister/Ilona Foubister) took the lead and held on to it to win by a substantial but rapidly closing margin. 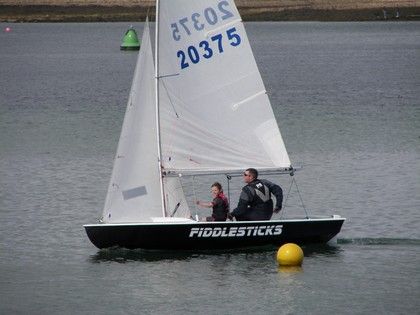 For the minor placings the competition was more intense with Vendetta (James Stockan/Elois), Moonstone (Andrew Leslie/Rachel Roberts), Silver Fern, Bonxie and Go Quickly Red (Malcolm and Pete Tipler) all fighting it out on the Regatta part of the course.  Silver Fern finally lost out when the rudder became entangled with weed and several other boats tramped on past. 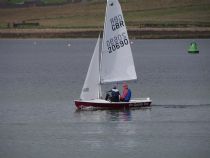 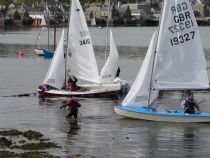 The real shakedown came on the final beat from the last buoy to the finish line. Those boats which headed furthest west gained ground over the rest.  Moonstone came through into second place, just beating Go Quickly Red.

The real surprise, though, was Njord which came from nowhere into fourth place by taking the most westerly course.  Just imagine what might have happened if he had started the race with the rest of the fleet!

After the racing there was a celebratory barbecue and a prizegiving with prizes for: 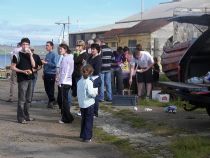 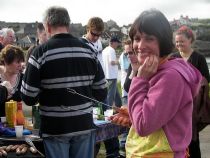 Many thanks to all who joined in the fun and enjoyed a pleasant afternoon's sailing to mark the Snipe 75th anniversary.