Only one skipper, Malcolm Tipler (Go Quickly Red), managed to complete sufficient races to qualify for a series result and so took the Silver Snipe Trophy.

The Commodore's Cup Series was completed on 30 August 2012 and the first three places went to:

Congratulations to all three.  Links to the series summary and the weekly reports are given below:

May to July Points Series

Congratulations to these three for their great results.  The full results can be viewed in the May-July Points Series Summary via the link below:

The 2012 May Tankard Series began on 3 May and was concluded with racing on 31 May. The first three places in the overall series results went to: 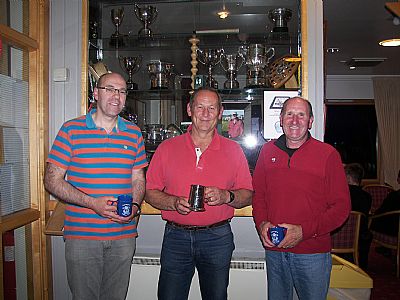 Congratulations to these three and to Humdinger (skipper Barry Jones) for finishing just two points behind on 64 points.

The full results for the series can be viewed by selecting the May Tankard Series Summary Schedule link below.

The weekly race reports can be viewed using the following links:

The May racing forms part of the May-July points series but the May results are taken in isolation for the May Tankard.

The Crew Races are for those who normally sail as crew or are new to skippering.  Sailors should assume that all races are skipper races unless the starter has specifically informed the skippers that a particular race is to be a crew race, either directly before boats go on the water or via the safety boat crew once boats are on the water.

Crew Races are only held when weather conditions are suitable and there are enough eligible crew to compete and in 2012 only four Crew Races were held. Overall, nine crew competed and the first three places were as follows:

Well done to these three who are all Junior Members.