The racing season runs from the beginning of May until the second week in October with several series running during that period.  The results and reports for all the Club racing held will be posted on this page.  Regatta and other events are reported separately.

The season's results are all input to pdf spreadsheets for which the links are given below:

For the race reports, please see the links for specific dates under each series in the sections below.  Each new series section will be added when the first results of the series are available.

The presentation of trophies took place on Thursday, 29 August 2013 and the list of trophy winners for the season to date is given below:

May to August Points Series

The May to August Points Series cover the period of the May Tankard, the Summer Series in June-July and the Commodore's Cup in August and competing boat/skipper combinations were permitted four discards from their results over the full series.  The series this year was won by Malcolm Tipler sailing Go Quickly Red.  For the full results for the series please see 2013 Points Series (May to August).

The new Summer Series ran during June and July with the final races taking place on Thursday, 25 July 2013. The series was won by Kenny Holland sailing Double Dutch.  Please see the results 2013 Summer Series (June/July) for the full results for the series.

The May Tankard Series came to an end on Thursday, 30 May 2013 and was won by James Burgon sailing Bonxie.  For the full results for the series please see 2013 May Tankard (May)The first four places in the series went to boat/skipper combinations who competed in all of the eight races held in the series.

The weekly race reports are given below and the race results summary spreadsheet is given under the 2013 Main Races link above.

The Crew Series ran throughout May, June and July and was won by Thorfinn Johnston.  For the full results for the series please see 2013 Crew Series (May to July).

In 2012, Holm SC trounced Stromness SC in the Interclub Event at Holm but in 2013 Stromness SC regained the trophy. Well done team.

The Good Sport Trophy is awarded to a member who demonstrates a particularly generous attitude.  Over the last two years, Mark Taylor has put in an enormous amount of time and effort to source funding for organising the training up of instructors, putting on youth training courses and sourcing further funding to enable the training to be able to develop further. This work is ongoing and Mark continues to lead the team involved in youth training. 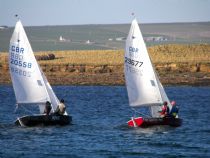 Griogair and Edward
Crew Race 9 May 2013 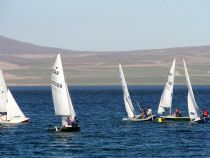 Good Sport Trophy
For a person demonstrating a generous attitude. The trophy was awarded this year to Mark Taylor for the working he has been doing to develop youth training and sourcing funding to enable this to happen.
site map | cookie policy | privacy policy | accessibility statement