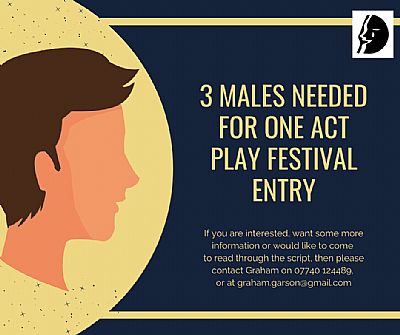 The club's open entry for the SCDA Festival is an adaptation of Black Watch by Gregory Burke (who is a cousin of Marie Mowat, who is part of our regular costuming team!). It is about the famous Scottish regiment, their history and the regiment being subsumed into the Scottish Regiments while fighting in Iraq in 2004.

Due to a variety of reasons, we are struggling to fill the cast, and are short of two young men to play soldiers who are killed in action, and an older man to play the playwright, doubling as an officer of the regiment in the final scene. None of these parts are huge, as they each appear only in half of the scenes. However, the cast need to be prepared to use very strong language as befits squaddies from the industrial towns of Fife and Tayside.

We rehearse on Sunday, Monday and Thursday evenings, although these roles will not be needed at every rehearsal in the first few weeks at least.

If you are interested, want some more information or would like to come to read through the script, then please contact Graham on 07740 124489, or at graham.garson@gmail.com