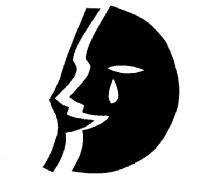 “Fraser Dixon in the chair gave background information on the reasons for the meeting. The 15 people who turned up to the meeting agreed that the club should meet on a regular basis, once a month, to have play readings, visiting speakers or other items of interest to members as well as put on productions of plays.”

The committee selected was:

Scotland’s Top Club:
With captain Dennis Bullen, and team members Phyllis Brown and Juliet Kepl, the Club won Grampian Television’s “Top Club 1992’ knock-out quiz competition, together with a prize of £3,000 which they donated towards the building of the McMillan Cancer Ward at the Balfour Hospital, Kirkwall. On their way to victory they defeated Peterhead Jobcentre, Urquhart SWRI, Aberdeen Customs and Excise, and, finally, Aberdeen ‘Golfing Greats’.

Looking for new material, the Club organised a one-act play competition, with the judges being Penny Aberdein, Vivia Leslie and Marjorie Linklater.

The judges placed “Eating the Apple Core” (author?) as the winner. Placed 2nd was “An Educated Guest” written by  Jeremy Hope, and 3rd “The Horseman’s Word” by Duncan McLean.

“The Measures Taken” by Bertolt Brecht. Directed by Graham Garson. 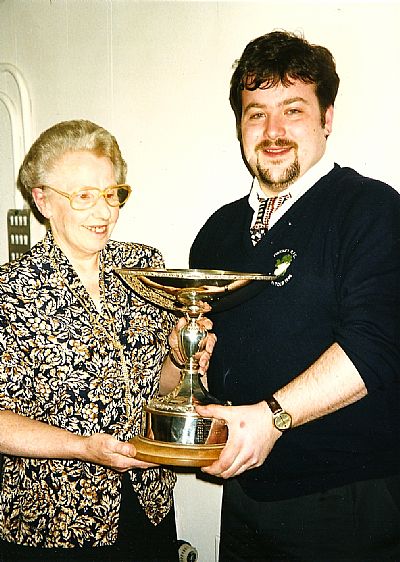 With a cast of Phyllis Brown, Brian Flett, Chris Meek and Sweyn Hunter, together with the chorus of Jim Scott, Zoe Eccles, Ingirid Morrison and Megan Eggeling, as well as Tim Geddes as pianist, they were placed third overall at the Orkney Preliminary Festival. According to the rules of the competition, however, only one team from a club can go through to the Divisional finals. As the first two placed plays were both from Palace Players, Stromness were on their way to the Northern Divisional finals in Montrose.

After a second place, they were then on their way to the Scottish Finals in Inverness. 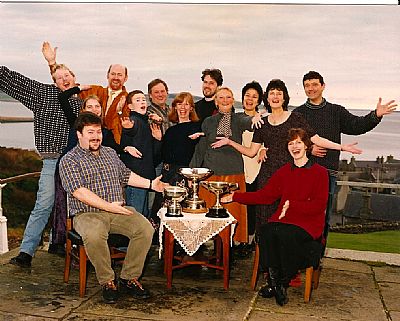 And they won! - a first for both the Club and Stromness.

“Cheshire cats did not have a look in when Graham stepped forward to receive the Wheatly Tassie! We were amazed; everyone was generous in their congratulations; we phoned home to incredulous families; we showed our teeth to flashing cameras; we were heading for Wales!”Review by Phyllis Brown.

So now they were on their way to represent Scotland in the British Finals at Theatre Clywd, Mold, Wales. Sadly they did not win, but their amazing achievements are not forgotten, and are regarded by the club members as ‘our finest moment’.

Revue “What Wise Men Never Do”

Winners of the Challenge Cup at the Orkney Preliminary Festival; a first for the Club. Awarded the Kennedy Thompson Quaich for Best Stage Presentation at the Northern Divisional Finals in Blairgowrie.

Interestingly, the performance of this production took place during the week that Fo was awarded the Nobel Prize for Literature, but was otherwise not connected to the event in any way!

Christmas Show:
“The Owl and the Pussycat went to See …. ” by Sheila Ruskin and David Wood. Directed by Jane Hunter.

Won the George Scott Trophy for the best set which was designed by Antony Eggeling.

Spring Show:
“The Good Clown and The Bad Clown” by Renata Allen.  Directed by Graham Garson.
This was a children’s production, with a large cast, to inspire interest before casting “Oliver”.

Challenge Cup winners at Orkney Preliminary Festival. Orkney qualifiers for Northern Divisional Finals were judged this year in Orkney due to Foot & Mouth Disease restrictions. However, they were not placed.

Spring Show:
“Our Day Out” by Willy Russell. Directed by David Fidler.

“The Sound of Music”. Directed by Graham Garson.

Brinkie’s - “Waiting for a Bus” by Peter Barnes. Directed by Diana Preston

Greenvoe - “The Hardman (Act One)” by Tom McGrath and Jimmy Boyle. Directed by Graham Garson

Youth - “Spud Ferret and the Case of the Stolen Diamonds” by Jeff Gallagher. Directed by Jane Hunter.

Third overall at Orkney Preliminary Festival. Winners of the A C Hunter Cup and the Orcadian Youth Cup, as well as the George Scott Cup for the best stage setting. Performed at Youth Festival in Arbroath.

Greenvoe - “Marcel pursued by the Hounds” by Michel Tremblay. Directed by Graham Garson.

Placed 2nd in Orkney Preliminary Festival – won Firth Trophy. Performed at the Youth Divisional Finals, but where not placed. However, they went on to perform for a week at “The Zoo” in the Edinburgh Festival Fringe 2005.

Hamnavoe (Youth) - “Is it Time Yet, Dad?” by Wayne Denfhy. Directed by Niamh Delaney.

Christmas Show:
Musical “Back to The Eighties”. Directed by Phyllis Brown, Melanie Slater and Lynn Procter.