The Inter Club races were hosted by Holm Sailing Club in St. Mary's on Tuesday 27 July.

For the Inter Club event Holm Sailing Club had seven competitors and Stromness had five. The top five results from Holm and the top five from Stromness counted towards a total for each team. As a result all results from No Fear and Valkyrie were removed from the calculation. Three short races were held in the light north easterly breeze. All the races had very close finishes. After adding the scores Holm came away with 81 points and Stromness clocked up 84 points which gave the win to Holm. Skeldro, normally at the front of the fleet, capsized in the second race which put them down to 10 place.

Many thanks to Lesley Spence and her father Jim MacDonald who managed the time keeping, not such an easy task with short races and many boats finishing close together. Thanks also go to Graham Drever and Bob MacKenzie who manned the safety boat for the event. 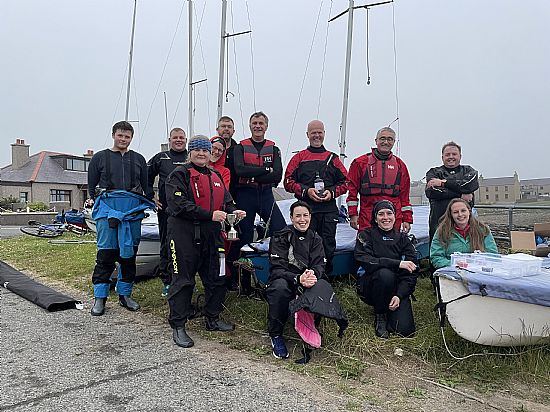 The Stromness Shopping Week Frozen Food Challenge Trophy was contested on Thursday 15 July in Stromness Harbour. Three races were held in varying conditions, light and shifty from the west to begin with then shifting to the south with a bit more power later in the evening. The fickle wind in the first race allowed a lot of place changes with the win going to Skeldro who managed to pick his way through the patchy course. For the second race there was initially a general recall as both Moonstone and Skeldro were over and they obscured the line for the starters. After a restart a shorter course was sailed with Skeldro in top spot and Moonstone second again. The third race was different as the wind had freshened and swung to the south, the course was changed. Moonstone and Aeolus both started well but Aeolus decided to leave the top mark to port, then touched the mark and did a 360 penalty. Despite that mess up she still managed to recover back to 2nd place. Skeldro had a man over board problem at the last mark which didn't help her cause, she finished in 3rd place. The overall results put Moonstone and Skeldro on 5 points, but Skeldro took the win on countback. 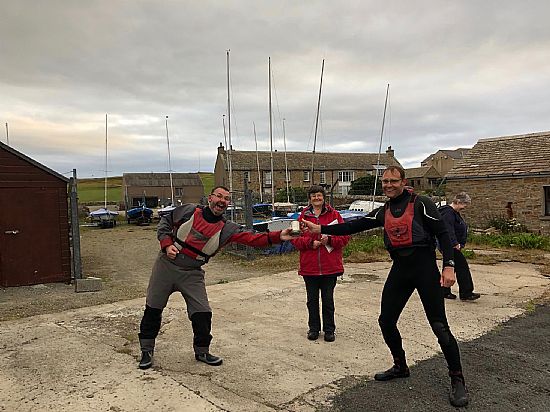 The photo shows Andrew Leslie (Moonstone) handing the tankard over to Mark Taylor (Skeldro) with Isobel Tipler in the background.

Stromness Regatta was postponed due to a gale on the original date of 17 July. A new date was set and the regatta went ahead on the 14 August. Conditions were fresh and a number of boats retired. One class race was held, the second race (Allcomers) was cancelled.

Kirkwall Regatta was held on Saturday 7 August in a fresh south easterly breeze. The original plan was to have one race, a break for lunch and then two afternoon races. On the day the third race was abandoned as the weather conditions had deteriorated.

Cats afternoon race. The wind picked up a bit in the second race resulting in a couple of dramatic capsizes; Awesome and Plum Crazy both retired.

The Kirkwall Regatta junior races were held on Sunday 8 August, postponed from the Saturday which was too windy. Four Picos took part in three races. Each race was two laps round a triangluar course set in the bay.

Burray Regatta was held on Saturday 10 July, the first 'post covid' event. Two races were held in the morning followed by a lunch break and lifeboat funday and raft race. After refreshments the boats went out for a third short race. The breeze was light from the East, steady enough for good racing. Three cats, six snipes and seven mixed centreboards took part in the racing.

Stromness Sailing Club have upped their game in the Snipe class with two relatively new boats which performed very well. After three races Scott and Amy Tulloch won sailing their new Italian boat Perlavela. Malcolm Tipler with Ewan Sinclair came in second sailing Mandarino. Mairi Fleet had to retire from the first race when her crew Sacha Woolham hurt her back. Paula Hemsley stepped in for the other two races.

The Mixed Centreboards race included a wide range of sailing craft, including three Lasers (one Radial, one standard and a Laser EPS), two Wayfarers, and the Orkney Sea Cadets took to the water in a Pico and a Quest. The first race was a long cruise of three laps up and down the bay, the second race was shortened to two laps. The third race was held after a lunch break and was just a single lap. David Clouston with crew Andy Heddle won overall sailing Wayfarer Smyril, with Joshua Brown second in Laser Radial Pato.

Holm Regatta was held on Saturday 24 July. Two class races were held followed by the Allcomers race. The breeze was light to moderate from the south east, steady enough for good racing. Three cats, nine snipes, three mixed centreboards and two yoles took part in the racing. Class races were held for Snipes, Mixed Centreboards, Yoles and Cats. The course gave a beat from the start across the bay to 2 then a fine reach to 3, a run down to 5 and then another beat back up to 3, a run down to 5 and a short one sided beat back to the finish. In the event races 1 and 3 were both shortened to give the course 2, 3, 5 and home for the second lap. The Allcomers race was made up of the Snipes along with the mixed centreboards. Simon Kemp gave a briefing covering the course to be sailed before the boats launched.

For both races in the mixed centreboards Warspite (Laser, Andrew Leslie) was first across the line followed by Pato (Laser Radial, Joshua Brown) and Jester (Laser EPS, Sid Milton) in third. The finishing sequence didnâ€™t change after handicap.

In the Allcomers Race Warspite (Laser, Andrew Leslie) took the lead but due to the handicap it wasnâ€™t until the race was finished and the numbers calculated that the positions became clear. In the end the win went to Warspite with Pato (Laser Radial, Joshua Brown) in second and Still Game (Snipe, Simon Kemp and Tamsin Bailey) in third. Still Game also got the trophy for first Snipe in Allcomers. The results were very close with the first three boats all finishing within a minute on corrected time.

Three catamarans took part in the racing with Willy Flipit (Calum Rendall and Scott Johnston) winning the prize in Willy Flipit. The cats had three races back to back using a longer course out to a buoy set in Scapa Flow.

One Yole and a Westray skiff took part with Mohican (Angus Budge and Paula Hemsley) winning. The Yoles sailed a shorter course.

Three boats took to the water on 21 June for the Holm Sailing Club's Midsummer Sail. The timing of the event was to allow boats to race during Orkney's Summer Solstice. Graeme added flashing lights to the marker buoys and car headlights lit up the fiinsh line from the pier. Simon was delighted to win a bottle of Whisky. Emma won a bottle. of wine, while Tony and Graeme fought over the Ferrero Roche!

The race format of three back to back races without a break for lunch is a change from the traditional Holm Regatta format and seemed to work very well. Cake and biscuits were given to the weary competitors when they came ashore. Heather Thomson ran a childrenâ€™s treasure hunt to help keep the younger spectators entertained.

The Regatta was supported by the very generous sponsorship of Highland Park Distillery. The prize giving and raffle were completed after the races, Commodore Lynn Bartlett read out the winners and Keith Palmer from Highland Park presented the trophies. Richard Flett won a bottle of Highland Park Sigurd whisky in the raffle. Many thanks to the Holm Sailing Club committee of Lynn Bartlett, Mairi Fleet, Simon Kemp and Emma Thomson for organising the event. Thanks also go to all the safety boat crews, there were three safety boats involved on the day (Graham Drever and Bob MacKenzie from Holm, John Orr and John Tulloch from Orkney Sailing Club and Willie Mackay and Mirek Borek from Stromness Sailing Club). Thanks to the race committee including Willie Watters, Margaret Hinckley, Jim MacDonald and Liz McMillan, they kept the racing on schedule and the event ran very smoothly. Thanks also to Sarah Kemp and Ali Shearer for managing the boat registration and raffle tickets.

The 2021 Kemp Cup was held on the 11 September, traditionally the final big sailing event in Orkney's calendar. Despite the heavy rain there was a good turn out of various boats.

The first race was for the Tennents Cup. Warspite (Laser, Andrew Leslie) got off to a good start but then Mandarino (Snipe, Malcolm Tipler and Ewan Sinclair) took the lead on the fetch from 4 to 3 and maintained the lead for the rest of the race. The win went to Mandarino with Warspite second and This Is It (Solo, Colin Pirie) third.

The second dinghy race was for the coveted Kemp Cup. The race was planned for three laps but was shortened to two laps, round a course in the bay, 4, 3, 2 Lifeboat buoy and finish. Mandarino took the lead on the first leg and kept it throughout the race.

The juniors got two races round course 4, 3, 2, Lifeboat Buoy and finish. Four Picos took part. Kavan Kynoch won the first race with Erlend Bailey second and Soma Veres third. In the second race the win went to Erlend with Kavan second and Soma finishing third again. The overall scores of Erlend and Kavan were equal with three points each so the two competitors were declared joint winners.

Four Cats took part in two races. The first race (for the OSC Cup) was twice round the 4, 3, 2 Lifeboat buoy and finish course. The win went to Katoosh (Erlend Tait and Kazia Watson) with Willy Flipit (Callum Rendall and Euan Galbally) second and Awesome (Ian Rushbrook and Steven Bruce) third.

For the second race (the Errol Bruce Cup) the cats did three laps of the same course. The win went to Awesome, with Katoosh finishing in second place and Willy Flipit third.

The first race to set off on Saturday was for the Centenary Cup for yachts. The win went to Panache (Jimmy Clouston) with XPDNC (Robbie Bruce) in second and Enigma (Simon Butcher) third. Samurai did not finish.

The second yacht race was for the Maxwell Cup. The win went to XPDNC with Panache in second place and Nikki (Bob Inkster) third.