After a peedie debate at the East Kirk car park we decided on paddling from Sandside on the East side of Deerness. This confused certain of the veteran members who were unsure how or where to find this 'Deerness' place! After some guidance we got to the 'get in'. 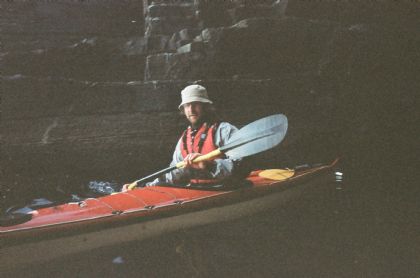 We paddled north and around the point hugging the cliffs, dipping in and out of the small caves and geos, the deepest of which became increasingly narrower. Adam pushed himself into the crevice as far as possible and could still hear the distant rumble deep inland as the waves broke.  If I wasn't so brave myself I would have said it was a bit 'SPOOKY'!

Shortly afterwards we paddled into the Gloup, I am always cautious when going in there as I dont fancy paddling back up hill to get out again!!
There is an eerie optical illusion of paddling downhill on the way in.

At the back of the Gloup there is a waterfall with a deep dark cave behind it.  It was decided that next time we would take head torches.

We continued north, in and out of more geos, caves and skerries. As we rounded the Brough of Deerness we could feel the cooling north easterly breeze. At this point David was showing discontent at not 'finding the Gloup yet'.  Not taking our word that we had spent a good 20 minutes in there ,we turned back to prove him wrong!

It was a pleasant paddle back to Sandside, the wind dropped away and the crescent of the moon was making an appearance above Copinsay.  It was a nice finish to the first club sea trip ot 2008.  Lets hope the next trip lives up to David's expectations!

The Evening was rounded off nicely with a pint in the Bothy.
It would be great to see all you new and old members coming for a paddle over the next few months!!