Westray Kirk Guild meetings happen fortnightly between October and April each year.  We usually gather around 7.30pm in the welcoming environment of Kalisgarth Care Centre in Pierowall.  Committee members meet late Summer/early Autumn to chat about the programme for the year ahead and we incorporate our own ideas together with inspiration taken from the Guild annual theme guide. The details of this year's programme are contained in the events section. 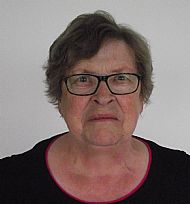 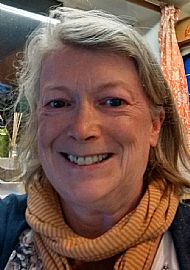 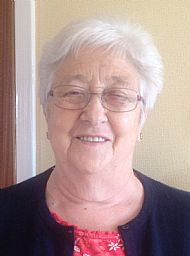 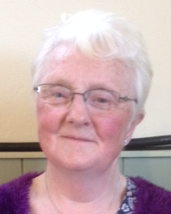 In December the guild invited the Baptist ladies to join them in a "Christmas" evening.

The church was beautifully decorated and all of the tables looked very festive. Liz McVicar welcomed everyone to an evening of carols, quizzes, games and, of course, a lovely supper! 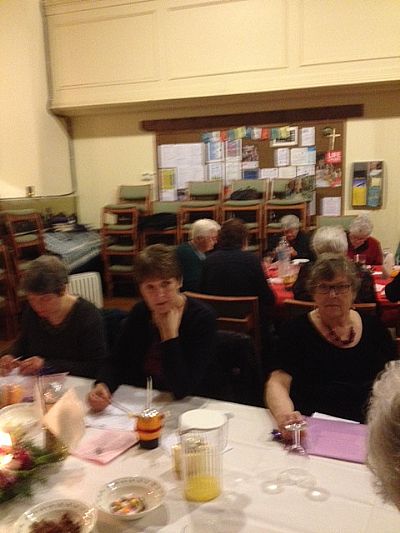 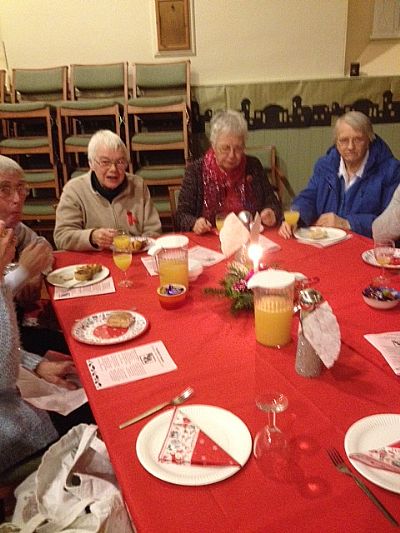 Liz explained about the Christmas tradition of making a Christingle and its significance. She had brought a large quantity of oranges so we all had the opportunity to make our own Christingle to take home. 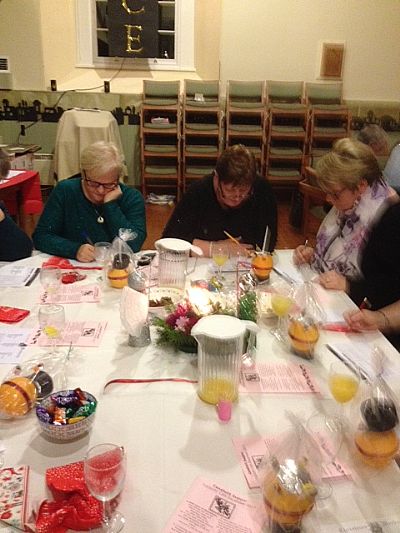 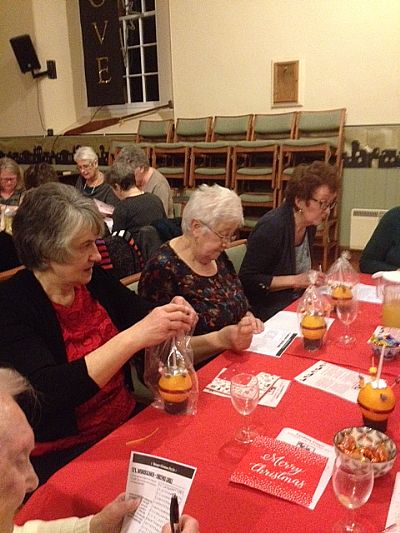 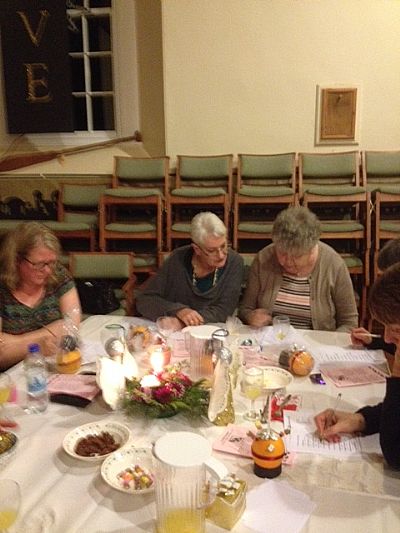 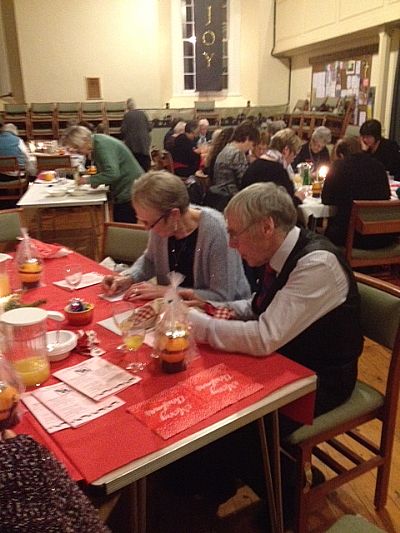 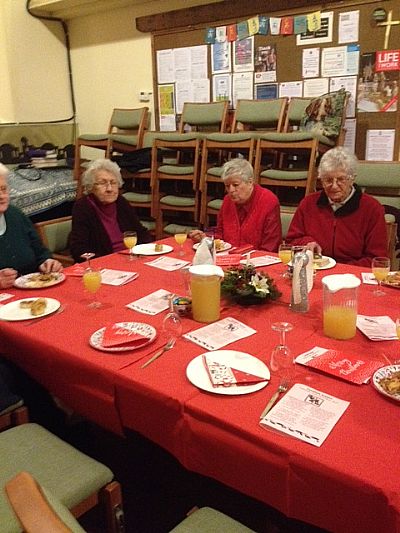 All agreed that it had been a lovely festive evening that prepared us all for Christmas.

At the General Assembly the Guild was congratulated on its 130th Anniversary.

The report by the National Convener Rosemary Johnston, whose father came from Orkney, was very well received by the General Assembly.

At the time of writing the report numbers were:

The number of men in the Guild is slowly rising – the past and present Moderators of the General Assembly recently becoming members.

There is a Guild to be found in two-thirds of our congregations, the smallest having 4 members and the largest over 90 members.

“ The effective running of a Guild can be greatly supported and enhanced by the provision of good quality resources. Leadership, faith development, worship, recruitment and so on can all be addressed in this way.”

Project donations to the Guild’s 6 current charity projects both home and abroad totalled £343,000 by February 2017.

It was a pleasure to attend the Guild’s Big Sing during Assembly week where the sound of almost 1000 voices was fantastic. £3000 was raised to support the work the Synod of Livingstonia’s Aids Programme in Malawi.

Although the Guild has been around for 130 years it is still relevant in today’s world, with different issues to address, and is an organisation worthy of our support.

The annual meeting took place in Edinburgh on 1st June 2017

The Action Plan launched in 2015 has been largely implemented, and the Guild is moving forward in a positive way with more flexibility, looking at new ways of leading, planning, resourcing and communicating through Social Media.

A new range of merchandise has resulted in sales trebling – this includes a new china mug produced for the 130th Anniversary. Guild tartan items are to be found in unexpected places eg the Queen has a scarf, Prince Philip has a tie, a lady wore a scarf when visiting the Antarctic.

As well as the Annual Gathering in Dundee in September, with an attendance of 2000 people, local gatherings are taking place to suit those who cannot travel so far. This year’s Big Sing is taking place in Inverness, a stage nearer but still a step too far. As it was held in Greenock last year we had our own Big Sing in Kirkwall and a Peedie Sing in Westray. It is good to involve as many folk where and when we can.

I have retired from being Guild Convener of the Presbyterial Council for Orkney, but am now taking my turn to attend meetings of the National Council ( Communication and Marketing Committee ) in Edinburgh which meets 4 times a year. It is important that there is a representative from every Presbyterial Council who will keep Guilds informed of all that is happening in the Guild world of today.

Our Spring Rally in Westray on 10th May was very well attended and was a great afternoon of fellowship and worship. 57 ladies travelled from the mainland, Mary Thompson came from Papay, along with ladies from the Baptist Church and our own Guild. All greatly appreciated Michael and Teenie’s presentation and singing. I had very positive feedback from mainland Guilds about the fellowship and hospitality they enjoyed in Westray. I would like to express my thanks once again to all the Westray ladies who provided food and helped on the day. It was greatly appreciated.

This involves leading meetings in Kirkwall five times a year. Representatives from the ten Orkney Guilds attend these meetings

Organising Spring and Autumn Rallies –  inviting speakers on a variety of topics. Usually around 90 people attend the  Rallies.

Support, through visits, is given to Guilds encountering problems.

What is the Guild?

In 1887 Dr Archibald Charteris had an inspired vision of a Church in which women fully participated. He investigated and reported back on the work being done by women. His findings were approved and passed by the General Assembly in May 1887.

“Commend the object of training women workers for service in the home and foreign fields to the liberality of the members and friends of the Church.”

He founded the Women’s Guild so that the Church would have the benefit of the spiritual gifts and practical energies of women.

In 1997 the Women’s Guild became The Church of Scotland Guild with a new constitution, and men were welcome to become members.

The aim of the Guild

Now there are four tenets of the Guild: Worship, Prayer, Action and Fellowship

The work of the Guild is supported by a Theme Guide, one theme for each year, ‘Go in Peace’, ‘Go in Joy’ and ‘Go in Love’.

1893    Bringing country produce to the poor of the city, at low prices.

1919   Opening hostels for women and girls – in Edinburgh and Glasgow.

When have the collective voices of the Guild been heard and support given ?

‘To be silent is to be unfaithful’.

Guilds have continued to support, over a three year period, a range of six projects under the Project Partnership Scheme introduced in 1997.

Working with Aid Agencies both at home and overseas, the Guild has done what it could to alleviate suffering wherever the need was identified, often among the most marginalised in society

Projects are supported both financially and by prayer.

At present the Guild is supporting:

Since 1997 £4 million has been raised for Guild projects: over the past 3 years around £775,000 was raised, and it is anticipated over £1million will be raised over the current 3 years.

Where there may seem to be depressing negative issues, we should always look for something positive to encourage and give hope.

If we think we cannot do something - remember, God does not choose the equipped, He equips the chosen.

For more details on the Guild Projects go to

In November each year we have Guild Week,  the main purpose being to raise awareness of the Church of Scotland Guild, it is an opportunity to celebrate all that is good about the Guild. For the past year or two the Westray Guild has taken the service highlighting HIV / AIDS.

At the present time the focus of the National Council ( based in Edinburgh ) and its committees is about the future of the Guild in a changing society.

As a result of The Three year Action Plan, supported by the General Assembly 2015:

The Guild has been around for a long time and has adapted through many world changes.

The Action Plan gives each Guild flexibility to adapt to its own circumstances.

QUOTE: Change is about acknowledgement of the present and anticipation of the future .... it is not about criticism of the past.

We cannot go back, but the past has made us what we are today.

Indeed the Guild faces challenges, but challenges can be opportunities.

The Guild is still one of the biggest voluntary organisations in Scotland.

As quoted in our Three Year Strategy:

WE ARE BOLD, WE ARE STRONG, WE ARE THE GUILD.