Dr Sarah Jane Gibbon continues with her research into the songs we sang at each SongShare event, and the finale weekend workshop at our finale weekend.  Information on the songs from the first 14 SongShares can be found here (1-7) and here (8-14).

“Leaving Stronsay” was written by Hector Sinclair and music by John Miller. Sarah Jane found it in a booklet of John Miller’s songs in the Orkney Archives (D1/634) entitled “Songs and poems of Orkney”.

The Sanday New Year Song recording found by BOSP was sung by James Fotheringham, Templeha, Sanday, and it was recorded by Ernest Marwick a short time before Mr Fotheringham died in 1969 (D31/TR/133).  James also sang a version of the Greenland Whale Fisheries, different to those found in South Ronaldsay and Stromness.

The New Year Song is the oldest preserved song in Orkney. Other versions of the song have been collected in Yorkshire, Aberdeenshire, Shetland and Fair Isle. Although the song was not native to Orkney, it became an integral part of community life in the islands, in no small part due to its association with New Year Customs, and over the years distinctive renderings developed in the various island communities. Several of these versions were recorded in the twentieth century, in a variety of media, and are preserved in the Orkney Library and Archive. We have versions from Rousay (late 1800s), Sanday (c.1836 and 1967), North Ronaldsay (1967), Stromness (1890), Burray (early 1980s), Long Hope (1893) and Firth (late 1800s).

The song accompanies a New Year’s custom that took place widely throughout Orkney until the last century. The song was traditionally sung on Old New Year’s Eve, at the principal houses of the districts by a group of young men. The group were given refreshments at each house and one of the band, known as the “Carrying Horse” carried a caisie (creel) on his back into which goods were placed.

The song comprises a blessing (the first verse and the verses blessing various animals) and a demand for gifts. In most versions there is reference made to “St Mary” (rather than Queen Mary) and “Our Lady” which indicate a pre-reformation origin to the song. The mention of King Henry in various versions has been taken along with the reference to “the fair Lady Rosamond” to indicate a twelfth century origin.

North Ronaldsay:  The island of North Ronaldsay has been incredibly important for the Song Project as a large amount of the material gathered in the early stages of the project came from recordings of Mr Sydney Scott from Antabreck in North Ronaldsay.  He was recorded by several songn collectors and his vast and fascinating repertoire of songs have served as a wonderful source for us.  You can listen to recordings of Mr Scott in the School of Scottish Studies in Edinburgh and in the Orkney Archive, and read transcriptions and commentary on some of his songs in the journal Tocher.  It is because of individuals such as Sydney Scott that we have been able to rediscover songs sung in Orkney in bygone days.  His willingness to take the time to be recorded singing these songs has allowed future generations to continue to appreciate and enjoy the songs which he learned from his father, and so the singing can continue.

For those of you who have been following the project and listening to the songs, you will know that we mention Sydney Scott often.  This is because he sang versions of several of the songs we have reworked, performed and taught, including Hoy's Dark and Lofty Isle, The Nobleman's Wedding, The New Year Song, I'll Hang My Harp on a Willow Tree, The Bride's Lament, The Isle of Erin, The Orcadian Boatman's Song and The North Ronaldsay Song.

Papa Westray (Papay): In 1961 Elizabeth Neilson recorded Mrs Hourston from Holland in Papay singing several songs, all but one were children’s songs and rhymes. “The ship that never returned” was the one non-child song. It was written by Henry Clay Work (most famous probably for “My Grandfather’s Clock” and “Marchin Thro Georgia”) in 1856 and was popular on both sides of the Atlantic. The song appears to have been popular in Orkney, no doubt because of its maritime nature.  The recordings made by Neilson are held in Edinburgh at the School of Scottish Studies.

This is a humorous bothy ballad, of which a fragment was sung by Annie Patterson and recorded by Peter Kennedy in 1955. Annie learned the song from her father.  In its form it is closest the Broadsheet Ballad version found in the NLS and published 1880-1900.  It is not know how the song reached Orkney, but it could have been transmitted orally by farm workers moving to Orkney from Aberdeenshire or alternatively may have come to Orkney in broadsheet form, as many songs did, and sold at the Lammas Fair or by travelling tradesmen.

NLS commentary “'Tam Gibb and his Sow' is a wonderful Scots comic song about a man who buys a sow and then loses control of it on his way home. The layout of the broadside, which includes transcriptions of the spoken sections between verses, marks the song very clearly as a performance piece. The song contains great examples of the vividness of the Scots language in words like 'grumphy', meaning 'pig', 'glaur', meaning 'sticky mud', 'skaith' meaning 'harm' or 'injure', and 'dree', meaning 'endure'.

Follow link for more information and for a copy of the Broadside.
http://www.nls.uk/broadsides/broadside.cfm/id/14979 [accessed 03.05.10].

The Wreck of the Brig Columbus 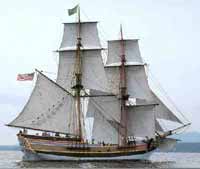 This was quite a popular song in Orkney and this version comes from the singing of Dot Foubister, as recorded by Peter Kennedy in 1955. She learned the song from her father who was from Flotta. It tells the story of the wreck of the Brig Columbus, which was wrecked on the Lother Rock near Burwick Bay on 23rd January 1862, with the loss of all but one of the crew and two passengers who were aboard.  It seems the song was written to commemorate the event by a Caithness herdieboy who was working near Burwick, although this hasn’t been firmly established as yet. Versions of the song have been recorded in South Ronaldsay, Burray and Longhope as well as Dorothy’s Flotta version and there are two distinct tunes used. This is the more melodic tune, with the other being a more mournful hymn-type tune.

Find information on the Brig on the Canmore site here.

We mistakenly had a link to another brig called Columbus, which went aground in Sanday.  Rather than lose the link, we thought we'd retain it here.