The island was named Burray or "Broch island" by the vikings. At that time, the brochs on the north coast facing out over Weddel Sound would have been imposing structures and obvious reference points from either land or sea.

Although these brochs only appear now as large grass covered mounds, when they were excavated in the 19th century, visitors would take tours around the inside. The excavations were however not done in a manner which would today be considered proper and so much information that could have been obtained has been lost. The brochs have also been robbed to provide building stone, so little of value remains. In 1940 the Northfield gun battery was built partially into the side of the West Broch.

One hundred yards to the west of the East broch are the remains of a chambered "short horned" cairn but this was levelled by the farmer in 1863. The destruction was observed however and the cairn was seen to be fourteen feet long, eight feet wide and five to six feet high.
It was divided into three compartments and contained a large number of unburnt human skeletons and seven dog skeletons.

On the west side of the island, just round the coast from the east and west brochs is Bu Sands where sand extraction has unearthed many finds from the iron age period, sometimes picked up by those who were just out for a stroll along the pleasant beach.

The last one hundred years have seen greater and more rapid changes in Burray than any previous period. Due to high taxes and death duties, many estates in Scotland were being broken up and sold. Burray was no exception to this and all of the farms along with almost all of the houses on the island were sold to the tenants. The island was no longer the property of a single estate. 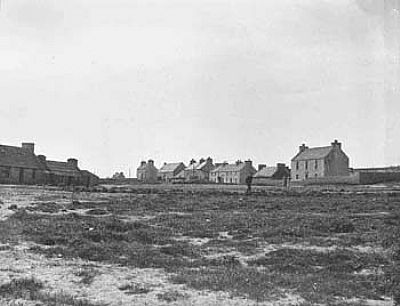 Burray Village in the early 1900s

The biggest changes though were due to the use of Scapa Flow as the northern base of the fleet during both world wars.

During the First World War, block ships were sunk in the eastern entrances to the 'Flow'. Although this was necessary for the defence of the fleet, it was also the final blow for the fishing industry in Burray which could not now easily access the fishing grounds in the North Sea. Despite many representations after the war, these blockships were not removed and so the industry never recovered.

The Second World War was the time of greatest change on the island. After the sinking of the Royal Oak by the U47 in October 1939, Churchill ordered the permanent closure of the eastern entrances to Scapa Flow.

The contractor engaged to construct the 'causeways' was Balfour Beatty. They had two construction camps, one near Burray Village and another in the north by Weddel Sound. The prisoner of war camp was close to the northern Balfour Beatty camp.

No 3 Barrier was to be built across Weddel Sound and No 4 across Water Sound.

Quarries and blockyards were constructed at both ends of the island and railways were built to transport the rock and the blocks to the cranes. An electricity generating station was built, a reservoir was constructed on the links and water was pumped from Ecna Loch. 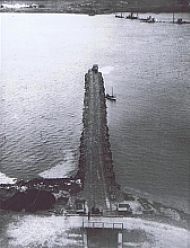 No 4 Barrier being constructed over Water Sound

The final closure on No 4 Barrier was achieved in June 1943 although the official opening ceremony was not performed until May 1945.

In a few short years, Burray had been transformed from a small farming and fishing community, through the influx of workers, prisoners and heavy equipment into one that was now linked to the mainland of Orkney. People would now be able to live in Burray while being employed in Kirkwall or elsewhere on the mainland.