For a look at the detailed timetable, click here

Report from the first Sanday Soulka weekend May 4th-6th

Sanday was delighted to welcome a number

of visiting speakers last weekend for the first

of three planned Soulka festivals this year. A

number of local folk added to the excitement

by opening up their homes for

demonstrations and displays, with Spinning 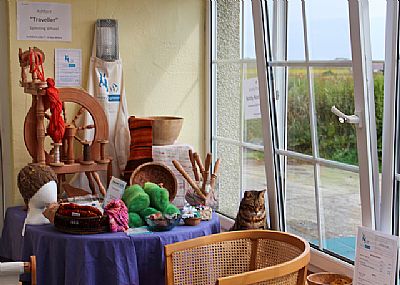 and other hand-crafts, artwork, the 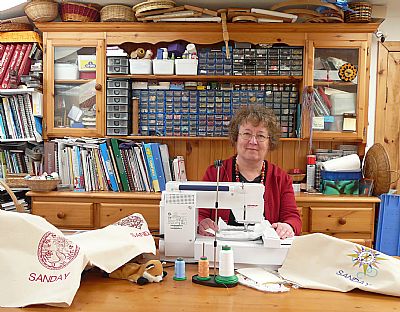 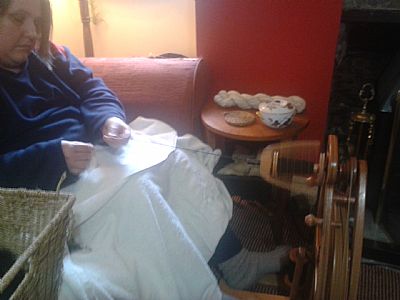 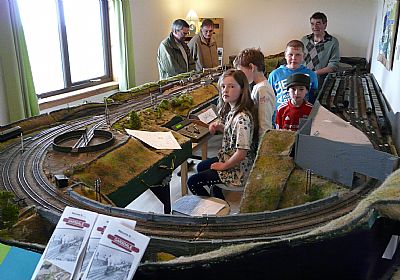 and the re-powering Wind Turbine project at 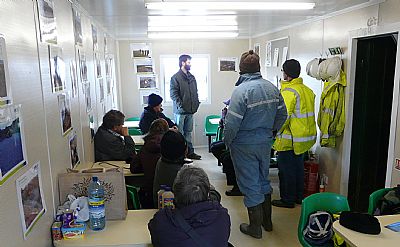 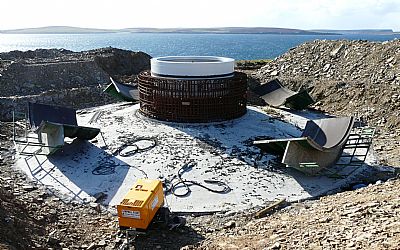 There was also impressive evidence at the

farm of Roo that will encourage those

considering whether it is worth trying to grow

trees as well as turbines in a windy

plenty to do - and time for coffee too. The 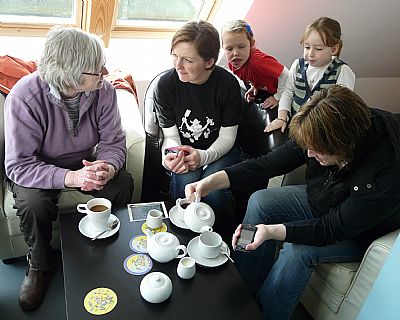 unreleased oral history recordings were both

available, and old photographs on view. 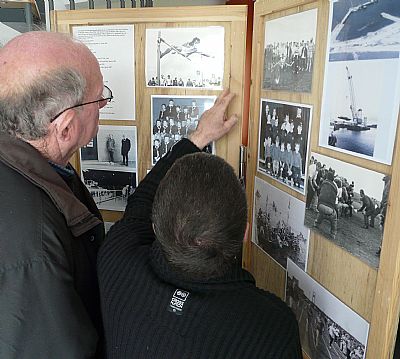 Expert schoolchildren were on hand to

help visitors negotiate their way around 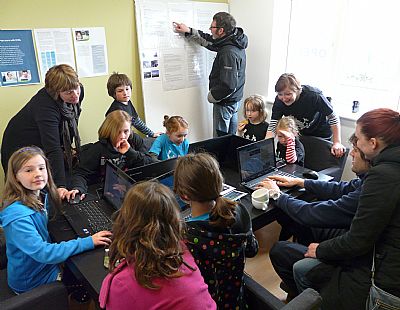 Have a look at  the Domesday reloaded

UK, and look around.

Soulka speakers had a common theme – 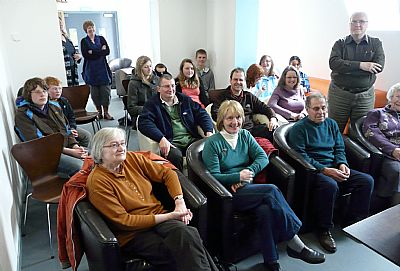 was based on his research into the impact of

increasing social mobility on the local

dialect, and Neil Leask, custodian of

to tell us some of the fascinating history of 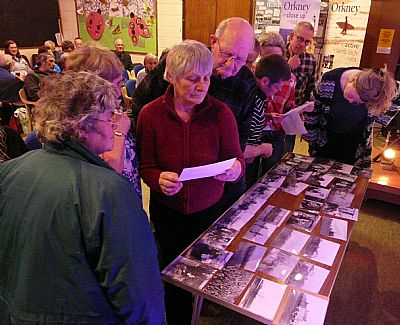 his own family’s genealogical connections

with Sanday. Neil also brought a number of

intriguing photographs that provided a few

conundrums for older residents to ponder –

perhaps we’ll see the picture of a throng of

Sanday folk in a future ‘From our Files’

Billy Cardno has had plenty of practice

elsewhere talking about his career on the

Thorfinn, one of the boats that served the

North Isles long before the advent of the 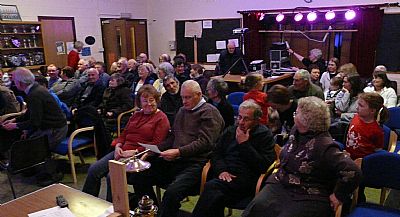 Ro-Ro ferries. He seized the opportunity to

Agent Jimmy Wilson. The two had to be

prised apart in order for Billy to be ready for

his engagement, with Jimmy’s final

We’ll never know whether he did or didn’t,

but there was plenty to keep us laughing

along the way – do others know who was

considered to be ‘as much use as a hip

pocket in a simmet’? If not, ask Billy next

with Alan Simpson, and a binnacle light from 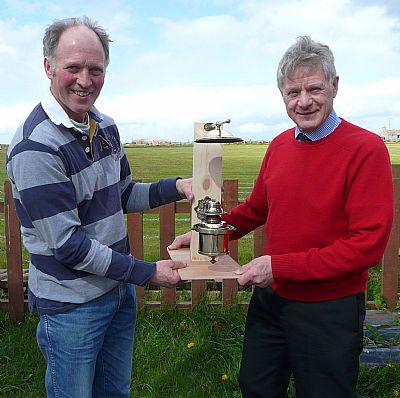 Undoubtedly one of the highlight of the

weekend was the formal opening of The

Croft. It was appropriate that Neil Leask,

steeped in Orkney’s crafting history, was

present to make a brief speech, and the

large assembled crowd was delighted when 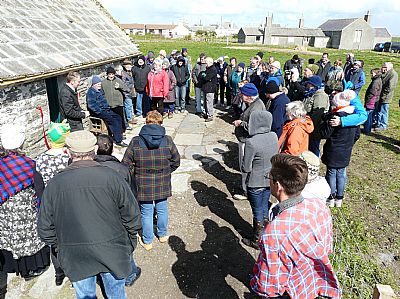 he invited Jim and Rona Towrie to cut the

ribbon. The restoration project has been a

real labour of love for the couple, and all of

those who visited commented on the

authenticity of the old But ‘n’ Ben and its

There was a Sanday feast inside

too, with some of the Heritage Group

everyone to Sanday oatcakes, bere

bannocks, Orkney cheese (many thanks to

company) and home-brew and rhubarb

wine. Musicians were inside too – Oliver 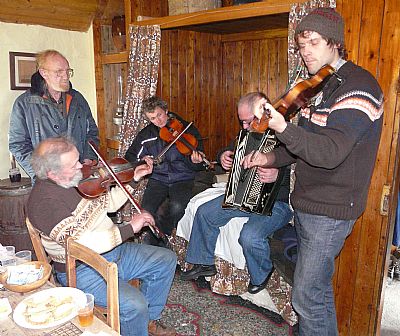 Sinclair sitting around one of the box-beds; it

was a very tight squeeze, but there was

room enough for a reelfor the Crofting wifey.

It was as though the building was speaking,

reminding everyonethat now it had been

brought back to life it was determined that

we should all remember the phrase, “Lang

may your lum reek”. From now on – the

Heritage Group welcomes visitors to The

every day until the end of September. 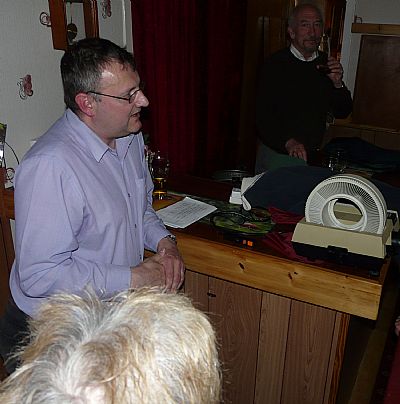 his grandfather’s early history in aviation,

followed by his pioneering company

to Orkney. Loganair is celebrating its 50th

crafted by Eday's Lewis Garson were on 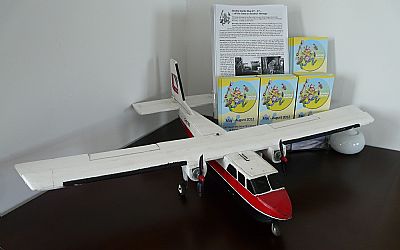 but it was more than a quarter century

earlier that the Inverness-to-Kirkwall run was

first established by ‘Ted’ Fresson. At the end

Heritage Centre a copy of his grandfather's

book 'Air Road to the Isles'.

Last of the invited guest speakers was Julie

Gibson, county archaeologist, who told us of

the huge importance of the Pictish/Christian

symbol stone found at Appiehoose on

known of the history of the Picts and their

historical connections with the Romans

further south, and the Vikings in Orkney, and

showed stunning photographs of the

restoration of the stone itself. Tantalisingly,

we only saw the ‘Pictish side’, but Julie left

us with news that the Stone was now ready

to ‘come home’, so we’re encouraged to

hope that all will be revealed before long –

The Traditional Dancing Club session and

the Spring Fair organised by the Tourism

and Business Group were both resoundingly

successful affairs, and a huge crowd was

drawn, too, to the Saturday night

entertainment given by Genuine Draft,

one of them a gifted musician, and it was a

tribute to their talent that their audience,

from schoolchildren to pensioners, all

thought they were superb.

Sunday night was Film Night; the Screen of

the Isles just gets better and better – it’s like

going to the flicks in the old days. Tom and

Jerruy, then a hair-raising ‘short’ featuring

the trio of base-jumpers on the Old Man of

Hoy, and an interval with usherettes and the

ice-cream trolley, before the main feature,

Tintin and the Secret of the Unicorn. It was a

full house – again. Have you seen the film?

No? Have a look at the trailer by clicking

The Soulka group members thank everyone

who helped so much to get the festivals off

to such a flying start – and of course all of

those who attended the events that filled the