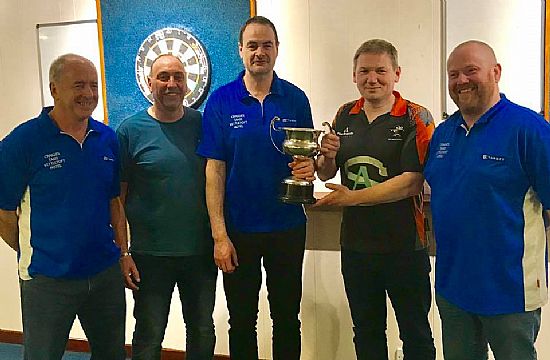 The Royal Cup took place in the Kirkwall Legion on Friday night.
Just five teams entered the competition which took place on what was a busy weekend elsewhere. The committee may have to look at the scheduling next season to attract more entries.
At the end of the night it was  well done to Sanday, winners of the cup, the last domestic team cup of the season. They beat the Orkney Golf Club in the final on the deciding 601 leg.

April continues to be a busy time for darts as the season end approaches, with the big match against Shetland at the of the month, as well as the Orkney championships.
This Friday is the Steven Flett Memorial Open Mixed Doubles. 7.30pm, in the Legion. All welcome, and donations for the raffle would be much appreciated.
This is the first of three end of season charity events, which will raise money for heart screening for the young in Orkney.
Donations from the events will be paid into Freya Dalrymple Memorial Fund at Cardiac Risk in the Young, and will go towards funding future local screening events.
Donations can also be made direct to the memorial fund set up in Freya’s name on the CRY website: www.c-r-y.org.uk/freya-rose-dalrymple

With the end of the formal competitions, league secretary Brian Moar published the stats for the season, which can be seen in full on the Orkney Darts Facebook page.
Topping the table for the most 180s is Kevin Gray with 47, Dennis Watt topping the B league with 28. In total an incredible 740 180's were scored.
Most high checkouts of 100 or more was Robbie Stanger with 20,  with Jamie Drever the B table topper with 15.
Highest Finish: Ian Linklater, Trevor Shearer and Ryan Tulloch all scored the highest possible with 170 checkouts.
In the B league the highest was a 164 thrown by Neil Tait.
On singles win percentages, Ivan Leslie and Kevin Gray both won 41 out of 44 played. In the B league, Dennis Watt won 23 out of the 24 matches he played.
The figures in the tables make impressive reading and highlights the high standard of darts being played in the KDDL.